I am indebited to both Fraser Hamilton and Janet Smith for their invaluable help researching the Johnstone family. Previously, I had been "stuck" at John Johnstone and Janet Barrie, but Fraser added on a whole new generation for me. Fraser descends from Agnes Johnston, born 1780 in New Cumnock, and Janet & I, from Agnes's brother John Johnstone.

For more information on Fraser's family, why not try his wonderful website by clicking on the following link:

William Johnstone was one of my 2xgreat grandfathers. For more information on his descendants, please click on this link:

William was born in 1844 in Muirkirk, the fifth child of Thomas Johnstone & Helen McKersie. In 1851 Thomas & Helen were living at Glenbuck, Muirkirk with their 6 youngest children. Thomas Johnstone was described as a Labourer, born in Crawfordjohn. In 1861 the parents were still in Glenbuck, although all but two of the children had moved out. Thomas was then working as a Drainer, which was someone who made drains. Whether this was promotion from plain labourer seems doubtful !

For the rest of Thomas & Helen's children who survived to adulthood, I have managed to find out something at least of their lives and details of their families can be seen in the tree below or on subsequent Johnstone pages. Sadly Thomas & Helen's eldest son - John - died as a small child after choking on a fishbone. Helen McKersie Johnstone died on 2nd May 1870 in Muirkirk. Thomas Johnstone remained in Muirkirk, working as a Drainer, and was living alone there in 1881 on Main Street. He died on 10th April 1886 at Grasshills Farm, and is buried in Muirkirk.

Thomas Johnstone was born in 1807 in Crawfordjohn, the eldest child to John Johnstone and Janet Barrie, who had married in the village the previous year. John & Janet seem to have lived in Crawfordjohn until about 1818, then moved to Muirkirk, where their youngest son Samuel was born. Janet died not long after, in 1820. Three generations of the Johnstones are remembered on a stone in Muirkirk cemetery; Thomas Johnstone and his wife, his father and mother and two of his sons. Unfortunately at the moment the gravestone is broken into three pieces, but hopefully it will soon be restored. The photos below show the two engraved portions of the gravestone, with a full transcription below: 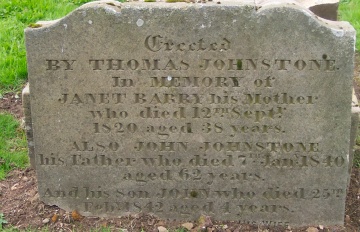 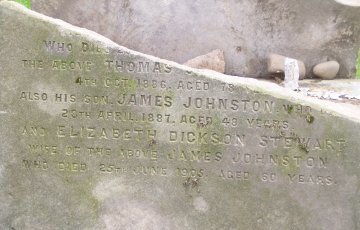 From his age at death in 1840, it seems likely that John Johnstone was the son of Thomas Johnstone and Mary Park. This is not definite though, so I've shown this line on the tree below as a dotted one. Further circumstantial evidence supports this theory - both John & Susanna Johnstone were said to be living in Greenburn, Crawfordjohn in the early part of the nineteenth century. The Scottish naming pattern which was practised by the Johnstones also suggests that John's parents were a Thomas & Mary. There are other possibilities for John's parents though (including another set of Thomas & Mary) so more work needs to be done.