Most of the information I have on this branch of my family was kindly supplied by my distant cousin Janet Smith and by the Clan Davidson Association. I should really rename the page "The Davidsons", but since it links to the rest of the Johnstone pages, I will leave it as Johnstone Page 3 for now. Agnes Johnstone was one of the sisters of my 3xgreat grandfather Thomas Johnstone.

Agnes Johnstone was born in 1811 at the remote cottage of Greenburn in Crawfordjohn, Lanarkshire. She married John Davidson in 1834 in nearby Muirkirk. By the 1841 census they had already had 4 children and were still living in Muirkirk. I don't know exactly when John Davidson died, but by the 1851 census, Agnes was widowed with her youngest child only 1 year old, so presumably John died about 1850/51. Poor Agnes was left with 8 children. Agnes herself died in 1860 aged only 48; her youngest child Robert Davidson would only have been about 10 at this point and already lost both parents. By 1861 aged 11, he was working as a cowherd in nearby Avondale.

I've not had the chance yet to trace many of Agnes's children, but I do know a little about 3 of them. Her daughter Martha married James Callan, a farmer at Glenbuck, Muirkirk. They had 6 children before Martha died also very young, aged just 40. Martha and some of her family are commemorated on a gravestone in Muirkirk, Ayrshire. The photo below shows the gravestone, with a full transcription alongside. 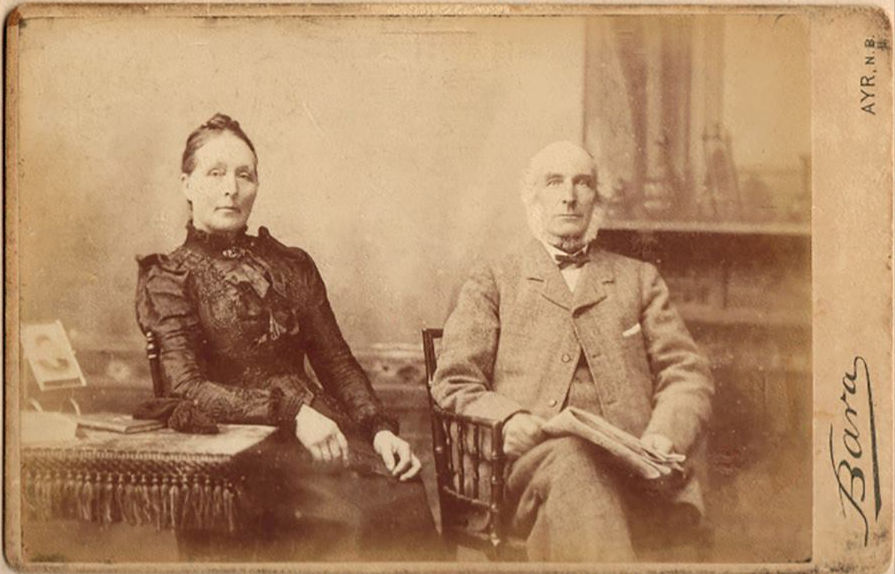 One of Agnes Johnstone and John Davidson's sons - William Davidson was a shepherd. In about 1869 William moved to a remote part of Exmoor to work the sheep there. He stayed for the next 33 years. You can read more about his life here. One of his sons - Edward Davidson moved to Herefordshire and married a local girl, Alice Louisa Payne. I was given this fantastic newspaper cutting (courtesy of the Bromyard & District Local History Society) which gives great detail about Edward & Alice's wedding. If you've got an interest in local or family history for the Bromyard area, why not check out their website too: Bromyard & District Local History Society

William Davidson was part of a wave of Scottish shepherds that came to Exmoor to look after the sheep there. He was the longest serving Scottish shepherd on Exmoor when he left in 1902 to return to Scotland. William and his wife Fanny settled in Irongray, Kirkcudbrightshire. The unusually shaped gravestone below is from Irongray churchyard (photo courtesy of Nick Hide).

Two of William's cousins also made the trip to Exmoor. My great great grandfather William Johnstone lived briefly at nearby Badgworthy in 1872, but soon returned to Scotland. Another cousin James Maxwell Johnstone moved to Hoar Oak Cottage near Lynton - the very same cottage that William Davidson lived in in 1871. James Maxwell Johnstone stayed in Exmoor raising a large family. Some of his descendants are trying to preserve the history and heritage of Hoar Oak Cottage - you can read all about it on their website:

If you are interested in this Davidson or indeed other Davidson families, why not check out the very helpful Clan Davidson Association website:

The family tree below summarises what I know about the descendants of Agnes Johnstone's family. It is hopefully reasonably accurate, but if you spot any errors, or any relatives, please feel free to E-mail me