Mary Johnstone was the youngest sister of my 3xgreat grandfather Thomas Johnstone. She was born in 1817 in Crawfordjohn at a farm called Bottom, the youngest daughter of John Johnstone & Janet Barrie. For more information on John & Janet, please click on the following link:

When Mary was still a baby the family moved to the Smallburn area of nearby Muirkirk, and sadly not long after that Mary's mother Janet Barrie died aged only 38. I've not managed to determine where Mary was in the 1841 census with any certainty, as there were 216 recorded of about the right age. But the most likely candidate is a Mary Johnston living in Glenbuck, Muirkirk as a lodger with a family called Anderson. By 1841 Mary had lost both her parents and was not yet married, so it is likely that she would be lodging with someone, unless one of her siblings took her in, but none of them seem to have done so. By 1844 things had improved for Mary and she had met and married John Affleck in Douglas, Lanarkshire.

John Affleck was born sometime around 1815 in Lesmahagow, although no baptism has been found yet. Around 1833 John Affleck found employment at Parisholm in Douglas, initially as a young farm labourer, but eventually becoming the farm manager. In 1851 John & Mary were living at Parisholm with their 6 year old son Hugh Affleck. The table below gives the details from the 1851 census (GRO ref Volume 641 Enumeration District 3 Page 2).

John & Mary Affleck remained at Parisholm raising 3 children to adulthood. John eventually died from pneumonia in 1878. The photo below shows a sizeable gravestone erected for John Affleck and marking his 45 years of service at Parisholm. 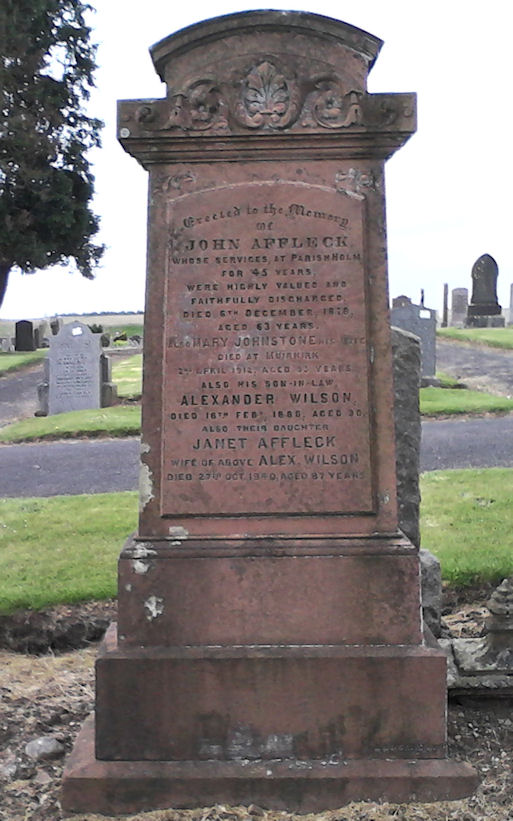 Mary outlived her husband by more than 30 years. In later life she lived with either her son Hugh Affleck and his family or with her widowed daughter Janet Wilson. Both son Hugh and daughter Janet seem to have become shopkeepers - Janet being a Grocer in Muirkirk and Hugh a Provisions Merchant in the Kilmacolm area. I don't know yet what happened to John & Mary Affleck's other son John, all I know is he was alive at least until 1881.

The family tree below summarises what I know about this part of the Affleck family. It is hopefully reasonably accurate, but if you spot any errors, or any relatives, please feel free to E-mail me