My 3xgreat grandmother was Helen McKersie, born in 1808 Muirkirk, Ayrshire, Scotland, to James McKersie & Grizel (or Grace) Taylor. Helen was the second known child and first daughter and so was named after her maternal grandmother Helen Wilson as was the Scottish naming convention of the time. Of the 5 other children it seems likely that two (Jean & Grace) died as children as no further records have been found of them. The eldest son William McKersie died in 1830 as a young man after a short illness. Helen's sister Mary and their youngest brother James McKersie did survive to adulthood though.

Their parents had married in 1805 in Douglas at which point James McKersie was described as a merchant at Glenbuck Ironworks - Glenbuck being a small village near Muirkirk, on the Ayrshire/Lanarkshire border. 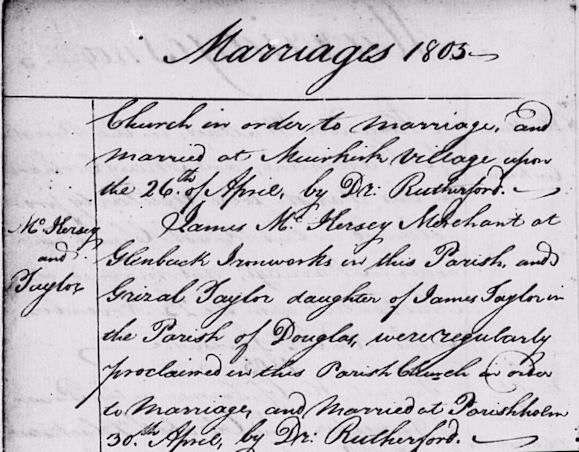 By 1841 his wife Grizal seems to have died and James McKersie was shown in the census as a farmer living in East Glenbuck with his son James and his daughter Mary and her husband James Mitchell. James McKersie senior died in 1850 and was prosperous enough to have made a will. He left most of his property and belongings to his son James with provisions for the children of his daughter Helen McKersie (or Johnstone) and the children of his deceased daughter Mary McKersie (Mitchell). By 1851 James McKersie junior was now the farmer at East Glenbuck with his wife and baby son. Also with him was his brother in law James Mitchell and nephew Thomas Mitchell. Sadly his own baby son (also James McKersie) must have died as an infant as there is no further record of him after the 1851 census.

When James McKersie junior died in 1894 he left most of his estate to his wife's side of the family, but in his Will, dated February 1882 he had made two small legacies, one to his nephew James Johnstone who in fact pre-deceased him and the second to his great nephew James McKersie Johnstone.

Both Helen Johnstone (nee McKersie) & her brother James are buried at Muirkirk cemetery. Unfortunately both their gravestones have been broken into pieces. The photos below show the two halves of James McKersie's gravestone as it now appears in Muirkirk. 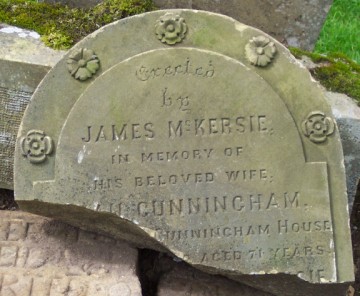 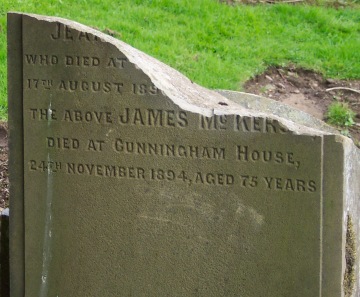 James McKersie senior was the son of William McKersie and Mary Taylor who farmed at Middlefield in Muirkirk. When James died in March 1850, the death notice in the Glasgow Herald noted that he was one of 4 brothers and that he was the first to die. (Image created courtesy of THE BRITISH LIBRARY BOARD. Image reproduced with kind permission of The British Newspaper Archive (www.britishnewspaperarchive.co.uk).

So far I've found the baptisms for 3 brothers, the aforementioned James born 1775, Alexander McKersie born 1777 and a John McKersie born 1773. The newspaper report in 1850 stated that the ages of 4 brothers combined was 301. The combined ages of the 3 known brothers in 1850 was 222, suggesting the missing 4th brother should be about 79, which would make him the eldest.

The second brother, Alexander McKersie, married Margaret Allan and they settled in the Eaglesham/Fenwick area. Alexander and Margaret have a large number of descendants, many of whom live in Australia. One of their grand-daughters even married one of James McKersie's grandsons!

The third brother, John McKersie, was for a long time a bit of a mystery. He was born in Muirkirk in 1773, but then disappeared from the Muirkirk records. Elderly family members insisted that there was a connection with the McKersies in Campbeltown and research found that a John McKersie, with no apparent family connection to Greenock had married there in 1805 and subsequently settled in Campbeltown where he worked as a stone-mason. Records show that many of his descendants were involved in the whisky trade and the McKersie family became well know as owners of distilleries in Campbeltown. The 1841 census shows John McKersie's birthplace simply as 'not born in Argyllshire' and unfortunately he died in 1850 - before official records would have recorded his parents' names and also before the 1851 census which might have given us his actual birthplace. However, his age at death is recorded on his gravestone and from that we can calculate his birth year as some time around 1773, so he could have been the 'missing' son of William McKersie and Mary Taylor. He also named his first son William, in keeping with the naming convention if his father was indeed William. For a long time we were stuck without proof that the two John McKersies were one and the same. Fortunately the advent of DNA testing has provided the answer. A direct male descendant from the Campbeltown line and a direct male descendant from the Eaglesham (Alexander's) line both took a yDNA test. They would only show a match if they shared a common male ancestors and we were all delighted when the results came in and they did indeed match! The Campbeltown McKersies were a thriving and very successful branch of the family. The wife of one of them (Marion McKersie nee McCall) was even awarded an MBE for her war efforts during World War 1. The splendid photo below was taken around the time she got the award. 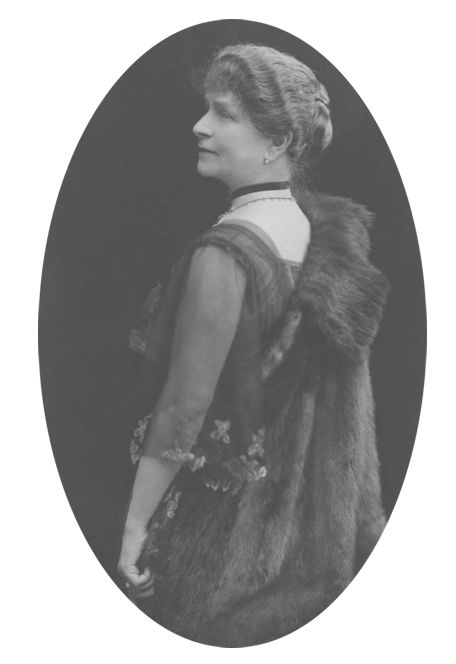 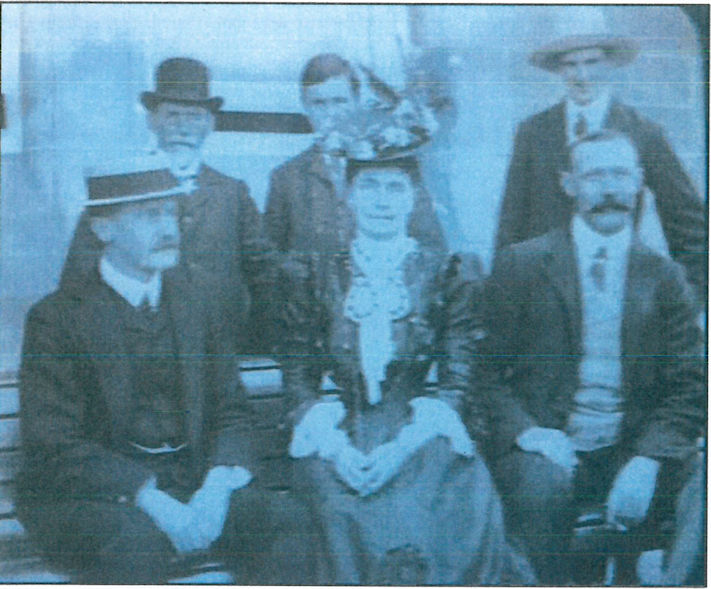 So that leaves the mystery of the 4th brother. I can find no other baptisms to fit into the family, but it may be that the records have been lost. There was however an Adam McKersie alive and well in 1851 and claiming to have been born in Muirkirk in about 1773. He was also living in Eaglesham area, not far from his possible brother Alexander. Not only that, but he also named his first son William and second daughter Mary - in line with the Scottish naming tradition if his parents were indeed William & Mary. Adam McKersie farmed as a tenant at Damhead in Eaglesham and, unusually for the ime, his unmarried elder daughter Janet became tenant when Adam died. Later, presumable when unable to continue working on the farm, she moved to a house in the village and the family of Adam's other daughter and son-in-law took over the farm.

There are also records showing the birth of a son William to Adam & Mary McKersie in 1806 and the death of a William McKersie was recorded at Damhead in 1840. Unfortunately the deaths of both Adam and William McKersie were before the introduction of death certificates which would have confirmed their respective parents' names and possible relationship to each other. Sadly it is unlikely that we will be able to prove this one with DNA, as there are no direct male living descendants (as far as I can tell) to take a DNA test. So for the time being Adam McKersie remains attached to the family tree below by a dotted line to denote the uncertainty of the connection.

The possibility that Adam McKersie was the missing brother and also potentially the oldest one, raises intriguing possibilities about the parentage of William McKersie. If Adam was his eldest son and if he followed the Scottish naming convention, then that would imply that his own father was called Adam. I can't find any William McKersie baptisms to either a father called Adam or indeed any other father at the moment. There do seem to be some big gaps in the registers for Muirkirk though. A search of the Scotlands People website reveals that for most years there were roughly 15 to 25 baptisms; but for some years there are only 2 or 3 recorded. One of these gaps occurs in the early 1770s - just when Adam McKersie's baptism should have been recorded. There are also big gaps in the 1730s - a possible time frame for William McKersie's birth. With these apparent gaps, it may be that we can never take the McKersie line further back, but you never know!

The family tree below summarises what I know about this part of the McKersie family. It is hopefully reasonably accurate, but if you spot any errors, or any relatives, please feel free to E-mail me

John McKersie of Campbeltown was a mason; the earliest definite record of him is his marriage to Catherine in 1805 in Greenock. By 1810 they had relocated to Campbeltown. His son William McKersie became a prominent distiller in the town, with his sons taking over the business after his death. Descendants of this branch of the McKersie family can now be found as far away as Australia and South Africa.