This page is dedicated to the memory of Archibald James McKersie who died on 16th July 1915 in Egypt.

Archibald James McKersie was born on 17th May 1888 in Campbeltown, Scotland, the second son of John McKersie and Helen Mitchell. He died on 16th July 1915 in Alexandria, one of the many millions of men who lost their lives in World War 1. It seemed sad for him to have died and all but these bare facts remembered, so I've tried to find out at least a little about his life until his untimely death aged just 27.

Archibald's early life was spent in Campbeltown on the Kintyre Peninsula on the west coast of Scotland. Campbeltown is a well-known whisky producing area and in fact Archibald's father John was a distiller. John McKersie must have been a distiller of some significance as in the 1891 census, when the family were living at Auchinlee, he was recorded as Provost (similar to a Mayor). Archibald remained in Campbeltown throughout his childhood (although he did go to school in Edinburgh in his teenage years), but seems to have shown an interest early on for the army. He had certainly signed up to the Territorial Army by the age of 21, as in 1909 The London Gazette reported that he had been appointed a 2nd Lieutenant with the 7th (Blythswood) Battalion of the Highland Light Infantry. After the usual 3 years at this rank, he was promoted to Lieutenant in September 1912.

However, he was probably only part-time in the army at this point, as in the 1911 census he is recorded, with his brother William McKersie, as a distiller. This would of course have changed with the outbreak of war in 1914. The Commonwealth War Graves Commission website describes him as a Captain in the 7th Battalion of the Highland Light Infantry and confirms that he is commemorated at the Alexandria (Chatby) Memorial in Egypt. I'm not sure when he was promoted to Captain, as I've not found any mention of that in the Gazette - perhaps it was posthumously. I can't reproduce the CWGC photo of the cemetery, but to see his page please click here

And on the back it says:


The card indicates that he would have been entitled to three medals. The British Medal was awarded to servicemen who served in a theatre of war between 5th August 1914 and 11th November 1918. The Victory Medal (Allied Victory Medal) was awarded for service in any operational theatre over the same time frame. The 1914-1915 Star Medal was issued to all those who served in any theatre of war against Germany between August 1914 and 31st December 1915. Apparently these three war medals are known by the nicknames of Pip, Squeak and Wilfred!

Many of the British Army World War One Service Records were destroyed when the War Office in London was bombed in 1940 and unfortunately Archibald's seem to have been among those lost. So I've got no further detail about his personal involvement in the war at the moment. But we do know that the 7th Battalion of the Highland Light Infantry embarked for Gallipoli at the end of May 1915 and Archibald would have been with his unit. The Gallipoli campaign itself is of course well documented, so some insight can be gleaned into his final days. To try and find out more about Archibald's last days I hope to look at the war diaries for his regiment in the near future. War Diaries were kept as a daily record of operations, intelligence reports and anything else that was going on for a given battalion. As Archibald was an officer, he may well have been mentioned individually. His medal roll card mentions HS Asturias, which was a hospital ship during the war and it may be that Archibald died on the ship.

As an officer and also as a member of a reasonably important family in Campbeltown, Archibald's death was almost certaintly reported in the local newspapers. So far I've found this report from The Daily Record, a week after his death. Image © Trinity Mirror. Image created courtesy of THE BRITISH LIBRARY BOARD. Image reproduced with kind permission of The British Newspaper Archive (www.britishnewspaperarchive.co.uk) Click: www.britishnewspaperarchive.co.uk to see the full newspaper page. 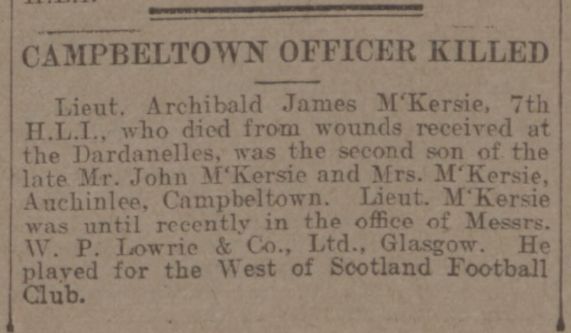 And from the Glasgow Herald newspaper of 22nd June 1915, this report of his death (image courtesy of Google News Archive) 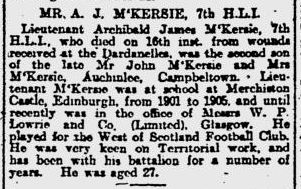 Hopefully, as more newspapers become available online, I will be able to find further reports of his death and with luck even a photograph. But these small snippets do at least reveal a few details, such as where he went to school and the fact that he worked for W.P. Lowrie & Co. Lowrie's were whisky stockholders in Glasgow - a natural choice of employment for the son of a distilling family. The report also mentions that he played football for the West of Scotland Football Club - a nice personal detail that helps bring his personality to life a bit.

The final documentation of Archibald's life is the Army Register of Soldier's Effects. These registers show what monies were owing to the soldier at the time of his death - in the case of Archibald it amounted to Ł45.12s.2d; not a huge amount, but much more than a non-officer soldier would have accrued. This money was allocated to his mother Helen McKersie. By any standard it doesn't seem much for her son's life.

In researching Archibald's final days, several sites have been invaluable, so I've included links to some of them here.