Like many men in the area, Samuel worked as a shepherd. He may have moved to Kildalton to find work as a shepherd as in 1840 he married Marion Maxwell there. The 1841 census shows the couple still living in Kildalton, with a Maria Maxwell also present, presumably a young relative of Marion.

Samuel & Marion must have moved back to Muirkirk in the early 1840's as the 1851 census shows them living at Shaw Knowe there, with all their children born in Muirkirk. The table below gives a transcription of the 1851 census:

The family remained at Shaw Knowe at least until 1871, by which time there were already several grandchildren. I've worked out how two of the grandchildren fit into the family, the only question mark is William McLean aged 3. I suspect he is the same as William Johnstone, the illegitimate child of Ellen and perhaps McLean was his father's name. The table below gives the details from the 1871 census.

By 1881 Samuel and some of his family had moved to Wales, to Caernarvon, where he still worked as a shepherd. With him were his wife Marion, his son James Johnstone, and grandsons Daniel & William Johnstone. The table below gives a transcription from the 1881 census (RG11/5570 folio 57 page 9).

I don't know how long the family stayed in Wales, but by the time of his death in 1888, Samuel Johnstone was back living in Muirkirk, although he actually died in Glasgow. Marion Maxwell outlived her husband by 11 years, dying in Muirkirk in 1899, aged 80. The informant on Marion's death certificate was her son Thomas.

I have finally managed to trace the fate of all of Samuel and Marion's children. The eldest daughter Helen or Ellen Johnston was born in Kildalton before the family moved back to Muirkirk. She had two children in Muirkirk before marrying Alexander Yuill in 1872 and moving to Lanark and having at least 2 children there. Although the oldest of Samuel's children, Helen outlived all but one of her siblings, dying in Lanark in 1935 at the grand old age of 93.

Their second daughter Janet married the widowed William Alexander in 1864 in Stair, Ayrshire. She had 4 children before dying aged only about 26 in 1870, from puerperal fever, presumably after complications in childbirth.

Their third daughter Mary Johnstone married James Hendry and had a large family with him. But she also had 2 children before she married. One sadly died as a baby but the first child another Marion Johnstone, seems to have been raised by Samuel & Marion. She went with them to Wales where she met and married a Welshman, Owen Davies. Young Marion and Owen must have returned to Scotland though, as in 1891 they are living in Avondale with her widowed grandmother Marion Johnstone staying with them.

Their eldest son John Johnston married Agnes Kilpatrick in 1874 in Muirkirk, with his brother James Johnstone as a witness. John and Agnes had 9 children according to the 1911 census; I've only actually found 8 children that they had together, although Agnes did have a child before she married John. They lived initially in Muirkirk before settling in Caldermill in Avondale where John worked as an agricultural labourer. By 1891 he had been joined in Avondale by his brother William and his family, living four doors down on the census returns. A transcription of the 1891 census is given below.

By 1901 John Johnstone had moved to Caldermill, where he remained until he died. The photos below were given to me by his great great grandson John Wilson and show the graves of John & Agnes and also their daughter Marion Maxwell Johnstone and her husband Robert Wilson in Strathaven cemetery. 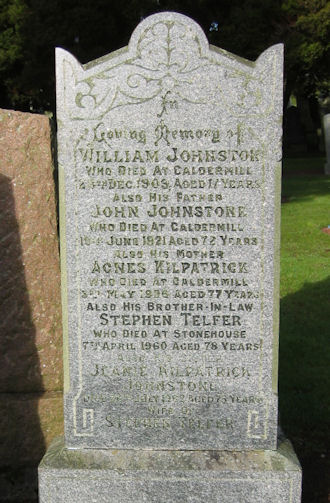 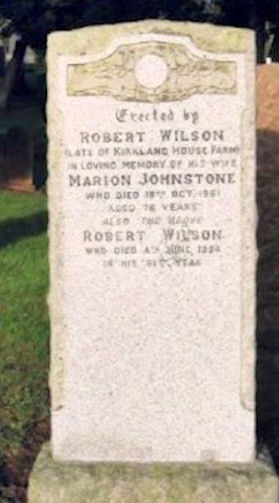 John Wilson also very kindly shared this photo of John Johnstone's second daughter, Marion Maxwell Johnstone. She married Robert Wilson and they must have had a long and successful marriage as the photo below shows them celebrating their Golden Wedding Anniversary in 1946. John Wilson, who is a great grandson of Marion Johnstone and Robert Wilson. For more information on Robert Wilson and his family, please click on the following link: 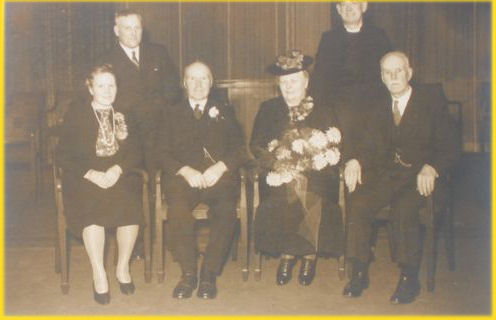 Thanks to one of John Johnstone's great grand-daughters, we also now have this lovely pair of photos of John's second son, John Kilpatrick Johnston and his wife Jeannie Haliburton, who settled and raised a large family in Greenock. 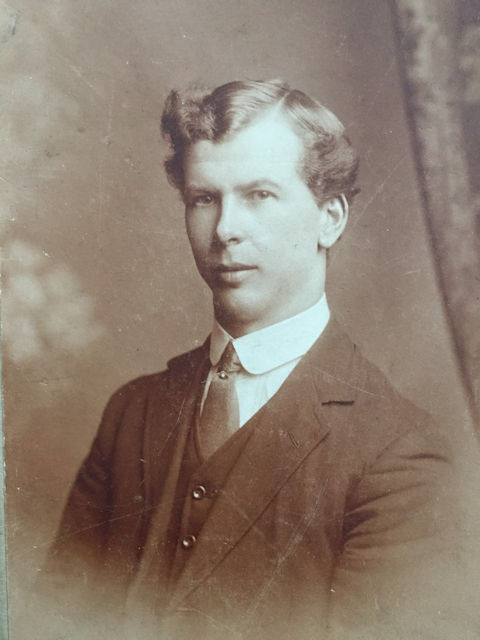 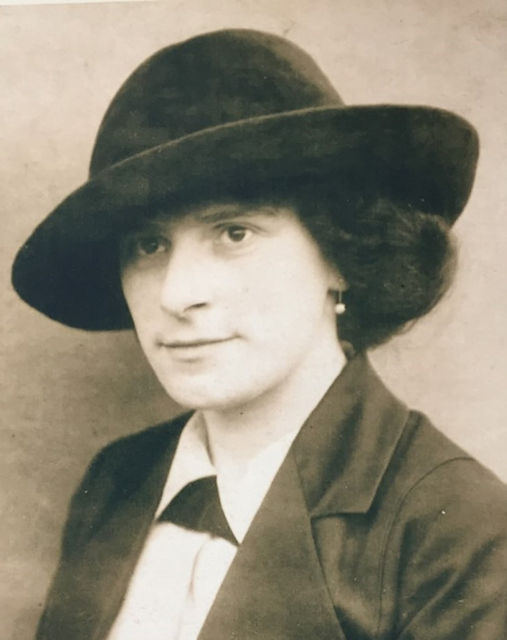 Samuel & Marion's 5th child and 2nd son was James Maxwell Johnstone born in 1852 in Muirkirk. James Maxwell Johnstone moved to Caernarvon in Wales when his father went there some time in the late 1870's-early 1880's. There he must have met his wife Sarah Thomason and they married in the area in 1881. James worked as as shepherd and his job must have made him move around the country quite a bit, as his children were born variously in Scotland, Cumberland and Devon. The family seemed to settle in Devon and were living in Lynton in both the 1891 and 1901 census. They lived in a remote cottage called Hoar Oak (or Oare Oak) near Lynton. Hoar Oak can only be a few miles away from Badgworthy where my William & Jane Johnstone were living in 1872. There must have been a strong connection between Scotland and this part of Devon to bring all these shepherds so far south from their homeland. Bette Baldwin, a great grand-daughter of James & Sarah has set up a website to preserve the heritage of Hoar Oak Cottage. The Hoar Oak Cottage website has lots more information on this branch of the Johnstone family. Please click on the following link to find out more:

The 6th child was Thomas Johnstone who was a cattle dealer of Dumfries. This Thomas Johnstone had married a Jane or Jeannie Watson in Galston, Ayrshire in 1884. For a long time I couldn't find him in the 1891 or 1901 censuses, although his wife was present without her husband in both. I have now realised that he must have travelled a lot with his work and have found him in 1891 in the Clitheroe area and in 1901 in Liverpool, both times staying in hotels and described as a cattle dealer. It doesn't look as if Thomas & Jeannie had any children, or at least none that survived. This Thomas Johnstone died in 1909 in Dumfries.

The 7th child was Agnes Johnstone born 1856 at Shaw Knowe, Muirkirk. She married relatively late in life - possibly as the youngest daughter she ended up caring for her mother. But in 1898 she married the widowed William Nisbet. She was already 42 at the time of the marriage and I haven't found any children for them, although William did have at least one child from a previous marriage. Agnes remained in Muirkirk until her death in 1948

The final two children were actually twins born on 18th January 1859 - George Mather (or Maider) Johnston born at 1:50 a.m. and William Wilson Johnston born at 2:00 a.m. The elder twin George was a shepherd and married Janet Ballantyne in 1881. They had at least 5 children and settled first in Galston and finally in Darvel where George died in 1928.

The youngest (by 10 minutes) child William Wilson Johnson was also a shepherd. He married Martha Lambie in 1879 in Douglas, with his twin brother George as a witness. William & Martha had 10 children, all of whom survived to adulthood. William is the only one of Samuel & Marion's children that I have a photo of so far. I am lucky enough to have a copy of this wonderful photo from one of William & Martha's great grand-daughters. It shows William and Martha at the centre of the family group taken at the time of the wedding of their eldest daughter Janet Johnston. The photo must have been taken before several of the family emigrated. The eldest son Samuel Johnston went to Canada and settled in the Calgary area. The third son John Johnston settled in America and Agnes moved to New Zealand. 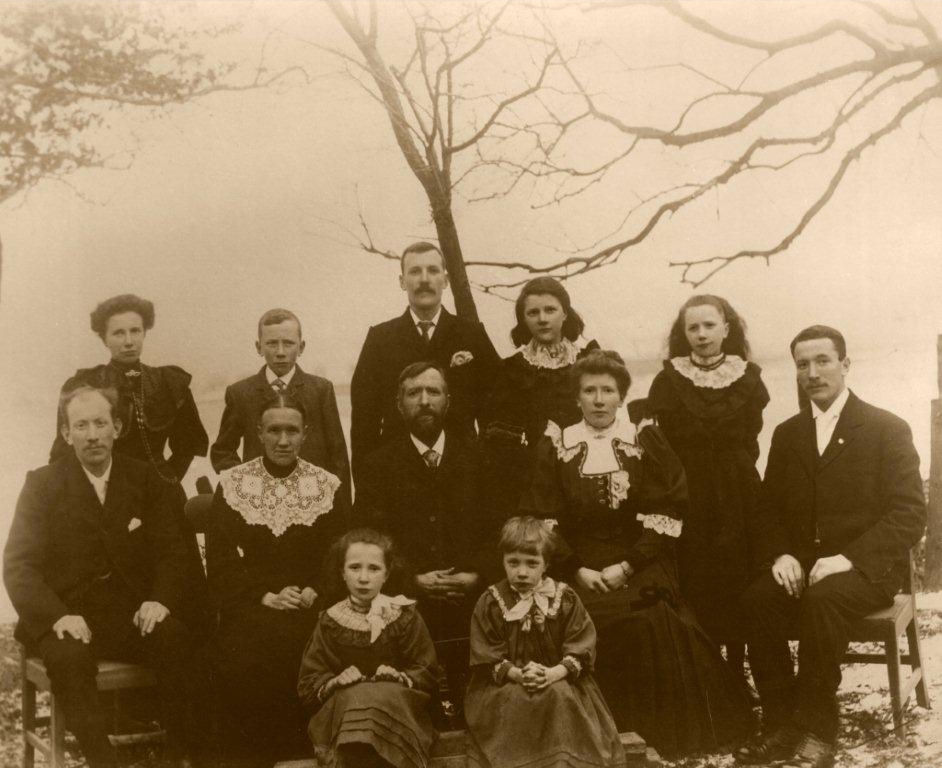 I also have this photo of William & Martha's gravestone, also kindly supplied by their great grand-daughter. 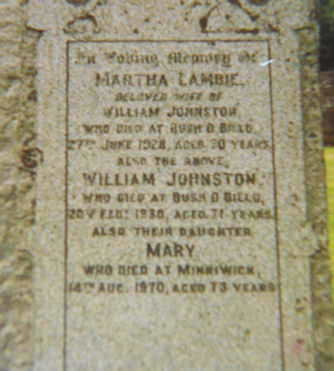 Finally I have one more photo from this side of the family. This great photo shows John Alexander Logan who married William & Martha's daughter Marion Maxwell Johnston in 1910 and was given to me by one of his great great grandsons. John Logan was a shepherd as can clearly be seen here in this photo of him with his crook and his dog. 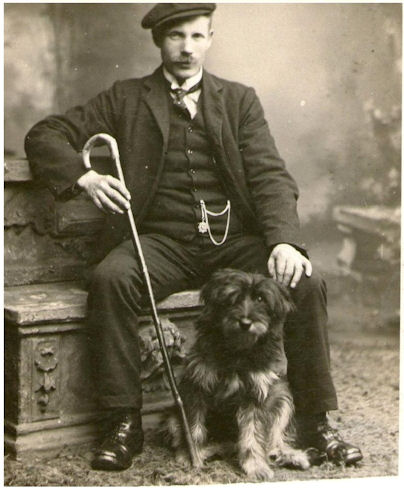 This branch of the Johnstone family is very large and there must be lots of descendants out there. It would be lovely to here from more of you and perhaps put more faces to some of the names listed above.

The family trees below summarise what I know about the above branch of the Johnstone family. It is hopefully reasonably accurate, but if you spot any errors, or any relatives, please feel free to E-mail me