This page is dedicated to the memory of Thomas Johnstone who died on 16th August 1917 in Belgium. 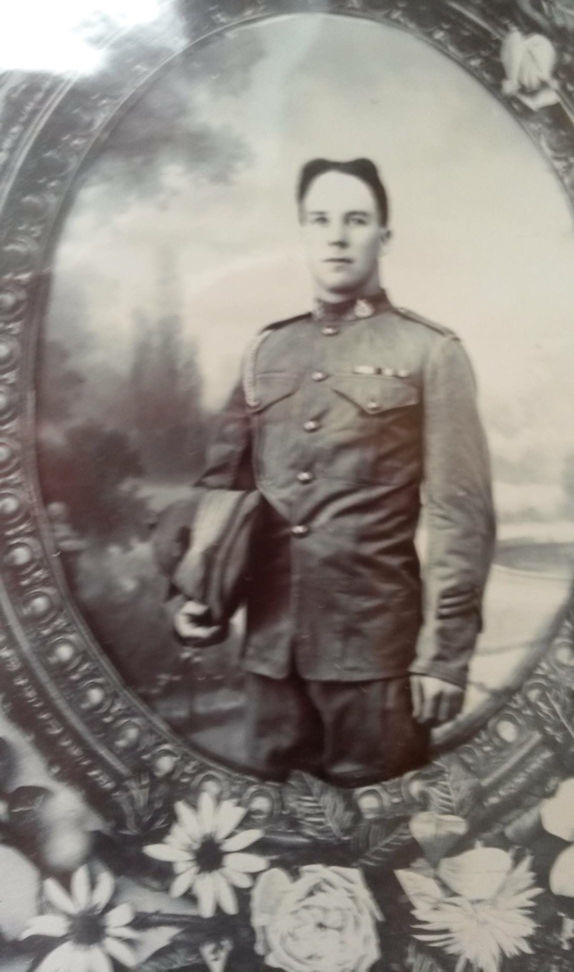 Thomas Johnstone was born on 22nd November 1894 at Hoar Oak Cottage, Lynton, Devon; the son of James Maxwell Johnstone and his wife Sarah Thomason. He died on 16th August 1917 in Belgium, one of the many millions of men who lost their lives in World War 1. It seemed sad for him to have died and all but these bare facts remembered, so I've tried to find out at least a little about his life until his untimely death aged just 22.

Thomas' father James Maxwell Johnstone was a Scottish shepherd who had come to Exmoor in 1886 with his Welsh wife Sarah Thomason and 3 children. They settled in remote Hoar Oak Cottage, technically in the parish of Lynton, but effectively out alone on the moor. There is a whole website dedicated to the history of Hoar Oak Cottage and its people. You can read more at Hoar Oak Cottage 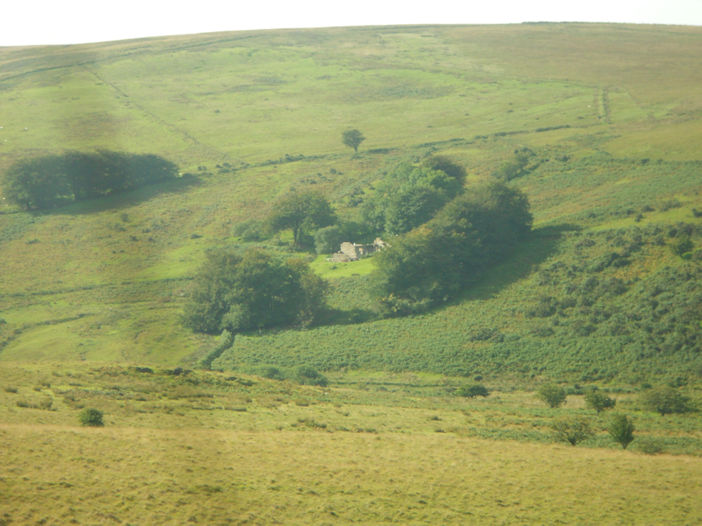 After arriving at Hoar Oak, James & Sarah went on to have 10 more children, of which Thomas was the 9th out of the total 13. The 1901 census shows the family as they were at that point, living in Hoar Oak. The oldest five children were probably already working in service or on farms elsewhere and the youngest two were yet to be born.

Tragedy struck the Johnstone family when in March 1904 the father James died suddenly. Sarah Johnstone was left with 7 young children to look after with no husband. Within a matter of weeks she'd had to move out of Hoar Oak Cottage and the family was living in nearby Brendon village. Thomas and several of his siblings were enrolled in Brendon School by June 1906. This was probably the first time he would have regularly gone to school - living out at Hoar Oak Cottage would have made school attendance difficult to say the least. By 1911 Thomas Johnstone had moved out of the family home and was working on a farm in Brendon. At some point after that he moved to work for a farmer called William Jones at Parsonage Farm in the nearby parish of Oare.

Reports in the newspapers suggest that Thomas was one of the early volunteers for the war. He enlisted initially in the Royal North Devon Hussars (as did his brothers Samuel & James who both survived the war). Thanks to Jim Baldwin, I now know that these Devon Hussars were a mounted arm of the Territorial Force and was made of of men that had experience with horses. The fabulous photo below shows Thomas Johnstone sitting proudly on a horse and was probably taken early on in the war when he was still stationed in the UK. You can just about see over his right pocket the Territorial Force Imperial Service Badge, which he was entitled to wear as a member of the Hussars. 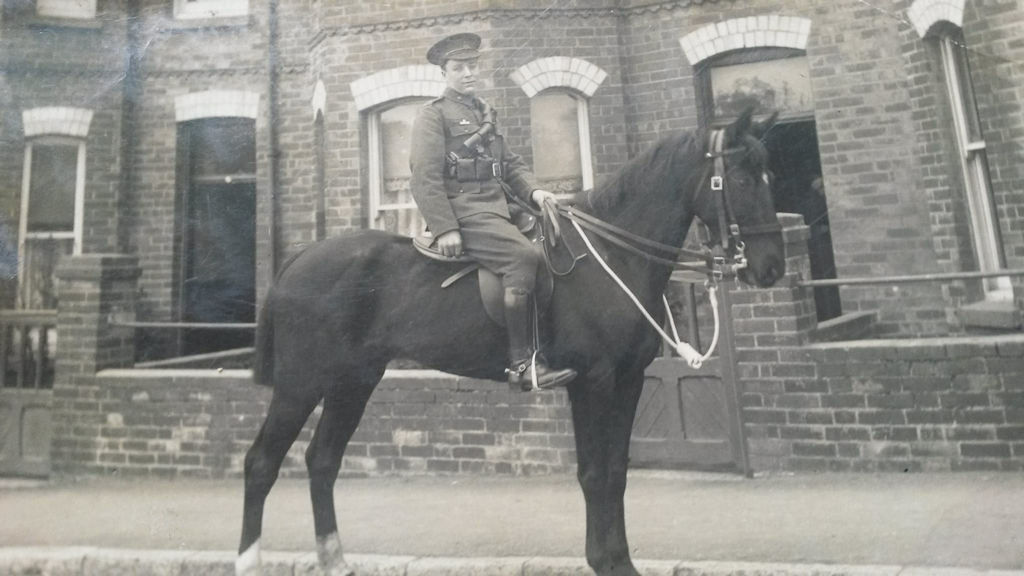 At some point Thomas must have been transferred to the Dorsetshire Regiment, joining them in mid-1916. The Commonwealth War Graves Commission website revealed that he was a Corporal in the 5th Battalion of the Dorsetshire Regiment and that his service number was 19282 and that he is commemorated at the Tyne Cot Memorial in Belgium. It also revealed that he got the Military Medal. I can't reproduce the CWGC photo of the cemetery, but to see his page please click here.

His medal roll index card gives scant information other than confirming what the CWGC says. The medal rolls show a soldier's name, rank and what medals they were entitled to. Due to copyright issues, I don't think I can reproduce the image of the medal card, so instead I've transcribed it:

Thomas' service records don't seem to have survived, but quite a lot has been gleaned from the newspapers. He would have been nearly 20 when the war began, and was probably one of the early recruits, most likely at the rank of Private. The first fact found in the newspapers reports that he was promoted to Lance-Corporal in June 1916 - this again suggest that he had been serving for some time to have been promoted.

In March 1917, it was reported both in the London Gazette and in the local Western Morning News that Thomas had been awarded the Military Medal. Both reports also describe him as Acting Corporal, indicating he had now been promoted from Lance-Corporal. His mother Sarah must have been so proud.

Sadly subsequent newspaper reports brought only the terrible news of Thomas Johnstone's death. Initially just a brief announcement, then fuller reports and details of his life. 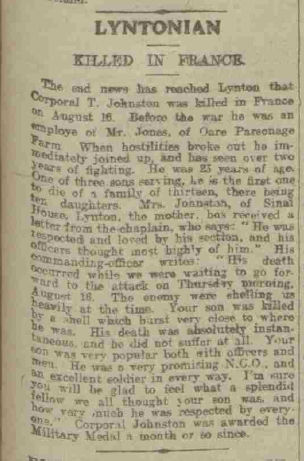 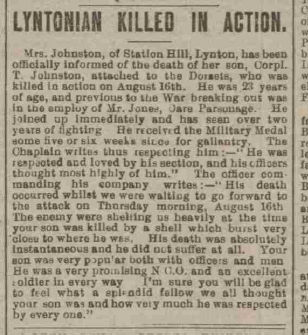 A memorial service was held for Thomas Johnstone at Lynton church on Sunday 2nd September 1917. The North Devon Journal reported it, listing the principle mourners, led of course by his mother. Most of his family were also there, although one brother, James Johnstone was not listed, presumably because he was abroad fighting in the war. The second mourner listed is a Miss F. Jones - it was not immediately apparent who Miss Jones was. 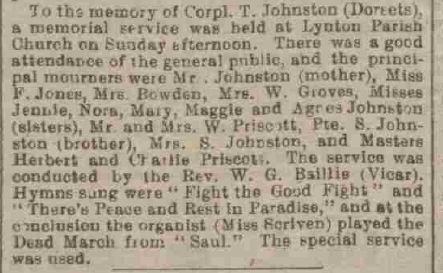 It seems Sarah Johnstone finally received her son's Military Medal in March the following year. It must have been a bitter sweet day to get those medals.

After the end of the war Thomas Johnstone's family posted this memorial to him in their local Gazette. As well as mentioning his mother and siblings, it also mentions a fiance - Florrie. 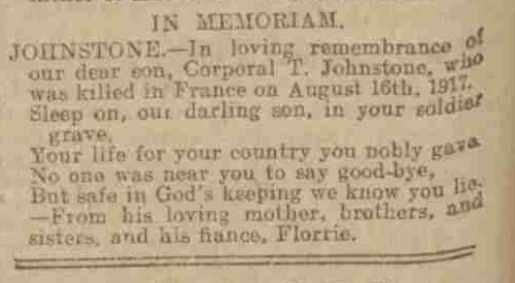 We may never know for sure who his fiance Florrie was, but I have my own theory. Before the war Thomas worked for a farmer William Jones in Oare. William Jones had a daughter Florence who was about the same age as Thomas. It was a Miss F. Jones who was listed as the second principle mourner at Thomas' memorial service, suggesting that she was of some importance to him. The Florence Jones from Oare did not marry until 1926, at which point the newspaper report of the wedding called her Florrie. It is all circumstantial, but I think Florence Jones is a good candidate for having been Thomas Johnstone's fiance Florrie. If anyone has any information on Florence (she subsequently became Florence Ash), I would love to hear from you.

In the absence of any detailed information of Thomas' service history, I looked at the War Diaries for the 5th Battalion of the Dorsetshire Regiment (these are now available to download online). War Diaries were kept as a daily record of operations, intelligence reports and anything else that was going on for a given battalion. I don't know exactly when Thomas joined up, but the newspaper reports indicated it was early on in the war. So he was probably present for much of the 5th Battalions operations overseas. In the summer of 1915 the 5th Battalion headed for Gallipoli. This must have been a huge change for men such as Thomas from the South West of England. Many suffered terrible diarrhoea and/or dysentery, before they acclimatised to conditions. In early 1916, they were sent to Eqypt, where they remained for 6 months before heading to Arras in France in the summer of 1916. From there they moved to the Somme, where the battalion suffered heavy losses. They then moved via Beaucourt, to Messines and eventually to Ypres. The 5th Battalion of the Dorsetshire regiment launched an attack as part of the Battle of Langemarck. Although this was considered a successful attack, 30 men were killed, of which Corporal Thomas Johnstone was one.

So Thomas' battalion was in the thick of it at many of the major well known campaigns of WW1 - Gallipoli, the Somme and Ypres. As well as details of military manoeuvres, the war diaries describe the conditions the men had to live in. The diseases; dugouts flooded by rain storms; men dying of exposure during the night. In one moving comment, the officer describes what he calls "the chief requirements of the men" - being "socks, woollen gloves, mufflers and cardigans, particularly from January onwards". That they should be short of such basic comforts is hard for us now to comprehend. Thomas must have survived many terrible days and nights, but could still muster enough "gallantry in action" to be awarded the Military Medal.

The final documentation of Thomas' life is the Army Register of Soldier's Effects. These registers show what monies were owing to the soldier at the time of his death - in the case of Thomas it amounted to less than Ł30, including the War Gratuity. His account was divided between his mother and his surviving 11 siblings, plus his brother-in-law Fred Harvey (Thomas' sister Ada Harvey had died a month after Thomas).

Thomas is remembered on the Tyne Cot Memorial in Belgium. Thanks to another Johnstone cousin, we have this photo of Tyne Cot. So many young men buried here. 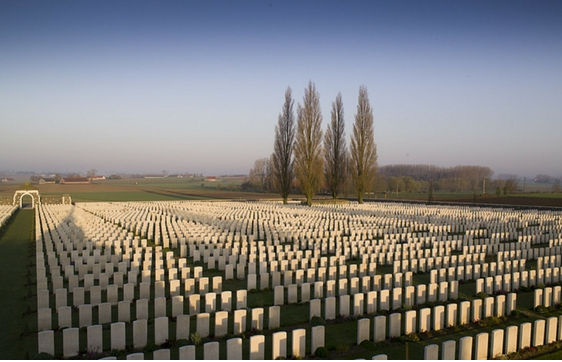 He is also remembered on the Lynton War Memorial back in his home town. 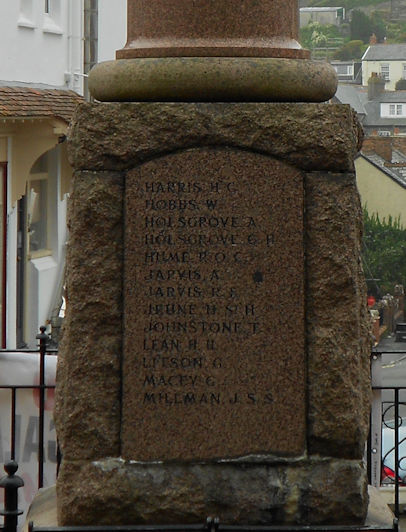 The Hoar Oak Cottage website is full of information about, not only the Johnstone family, but all the other families who lived there over the years: