This page is dedicated to the memory of Thomas Colthart who died on 4th October 1917 in Belgium.

Thomas Colthart was born in 1892 in Lanarkshire and he died on 4th October 1917 in Belgium, one of the many millions of men who lost their lives in World War 1. It seemed sad for him to have died and all but these bare facts remembered, so I've tried to find out at least a little about his life until his untimely death aged just 25.

Thomas Colthart was born on 27th June 1892 at Dillarburn in Lesmahagow, Lanarkshire. He was the eldest of 11 children born to James Henderson Colthart and his wife Janet Watson Naismith, who had married the previous year. James Colthart was a shepherd who had moved to Lesmahagow from nearby Crawfordjohn in the 1890s.

By 1901 the family were living at Rosehill Cottage in Lesmahagow and James was now working as a coal miner/roadsman. The family had grown with 3 more children and Thomas was now at school. By 1911 the census indicates that James and Janet had had 11 children in total of which 2 had sadly died. 8 of the remaining 9 children were still at home, ranging in age from 18 to 7 months. The 9th child may well have been in service somewhere by then. Thomas was now working as a coal miner - a hewer, while his father was back to farm work. A later newspaper report suggests Thomas was working at the Bellfield Colliery.

When the war started in 1914, Thomas Colthart was one of the early ones to join up - signing up in May 1915. The Commonwealth War Graves Commission website revealed that Thomas was a Private in the 2nd Battalion of the Gordon Highlanders, his service number was S/10009 and that he was buried in Tyne Cot Cemetery in Belgium. I can't reproduce the CWGC photo of the cemetery, but to see his page please click here

As is so often the case with these medal cards, not all of the information has been filled in, but it does indicate that he would have been entitled to 4 medals. There were the 3 "regular" medals. The British Medal was awarded to servicemen who served in a theatre of war between 5th August 1914 and 11th November 1918. The Victory Medal (Allied Victory Medal) was awarded for service in any operational theatre over the same time frame. The 1915 Star was awarded to all those who served in any theatre of war against Germany between 5th August 1914 and 31st December 1915. But the medal roll also has M.M. after Thomas' name indicating that he had been awarded the Military Medal. This medal was awarded to men who were not officers, but who showed gallantry and devotion to duty under fire. His parents must have been very proud when it was announced in the local newspaper. Image © Reach plc. Image created courtesy of THE BRITISH LIBRARY BOARD. Image reproduced with kind permission of The British Newspaper Archive (www.britishnewspaperarchive.co.uk).

Sadly Thomas' service records have not survived. Much of the British Army World War One Service Records were destroyed when the War Office was bombed in London in 1940. So I don't have any details of his service or what he was awarded his Military Medal for. The newspaper report indicates it was awarded in July 1916. It also seems from the newspaper report below, that he was in the Signalling Section. It sounds also as if he was popular with the other men and respected by his officers. Image © Reach plc. Image created courtesy of THE BRITISH LIBRARY BOARD. Image reproduced with kind permission of The British Newspaper Archive (www.britishnewspaperarchive.co.uk). 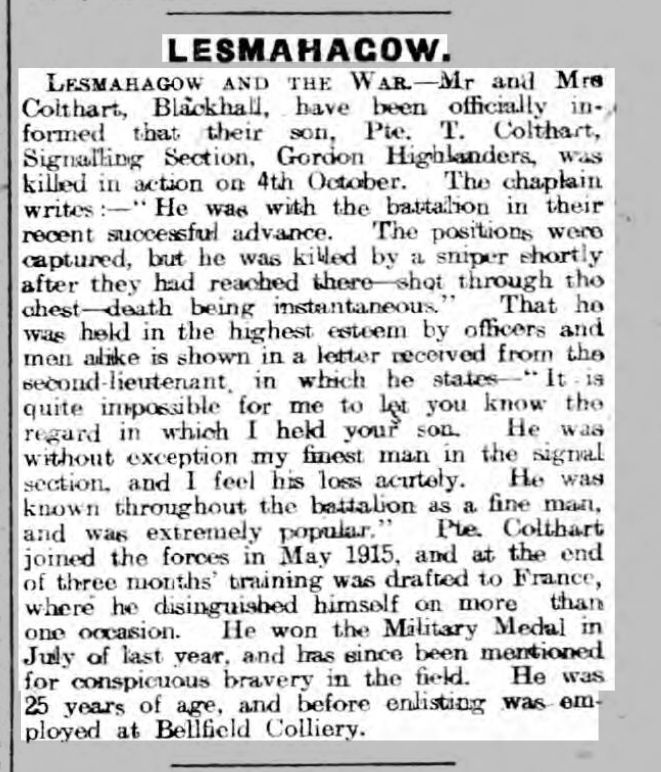 In the absence of any detailed record of Thomas' military career, I have tried to find out what his regiment was doing. You can now view many of the Regimental War Diaries online, so I have downloaded the relevant diary for the 2nd Battalion of the Gordon Highlanders.

No mention is made of Thomas Colthart's death in the War Diary, but it was not unusual for ordinary soldiers not to be named. The 2nd battalion of the Gordon Highlanders in 1917 were basically in the thick of the fighting at the Third Battle of Ypres (or Battle of Passchendaele). From the war diaries it is clear that the men had to contend with aerial bombing, shelling, snipers plus no doubt lack of sleep, fighting at night, poor accommodation and difficulties with rations. The map below shows many of the places named in the war diaries. Taken from The Scotsman 5th Oct 1917. Image © Johnston Press plc. Image created courtesy of THE BRITISH LIBRARY BOARD. Image reproduced with kind permission of The British Newspaper Archive (www.britishnewspaperarchive.co.uk). 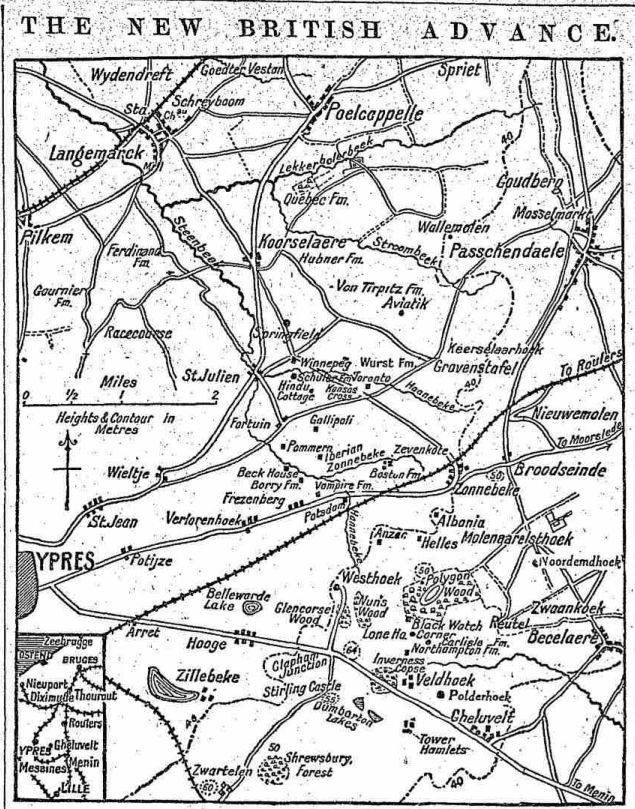 The same newspaper described the fighting in which Thomas died as "A Magnificent Attack" and a "British Victory". Any casualties on the British side are made light of, presumably to keep the morale of the British people up. No mention is even made of the Gordon Highlanders. 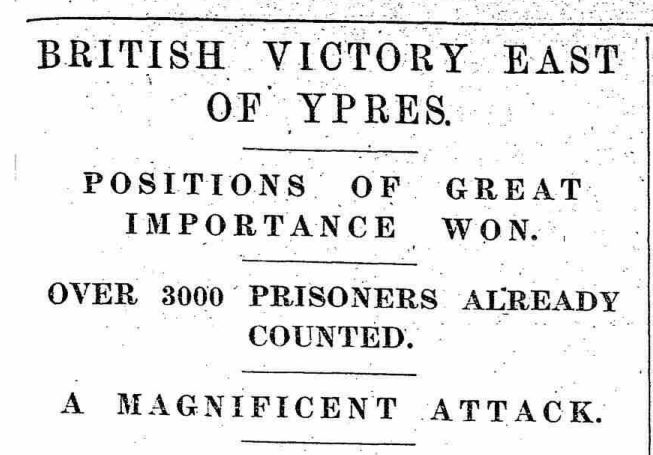 The final piece of documentation I could find for Thomas Colthart was his entry in the Army Register of Soldiers' Effects. It lists the amount of money in his account at the time of his death and the amount, including the War Gratuity, that was eventually paid to his next of kin - in this case to his father James Colthart. For Thomas the total amount came to just Ł17 10s 4d - not much to show for the ultimate sacrifice.

Thomas Colthart was buried at Tyne Cot Cemetery in Belgium. In a small way he was one of the lucky ones as his body could be identified by his Identity Disc. So many other soldiers' bodies were buried unidentified. His sacrifice is also recorded back home on Lesmahagow's war memorial. There is a photo of the War Memorial at Lesmahagow on Flickr - I don't have permission to reproduce the photo here, but hopefully it's OK to link to it here. Thank you to the Scottish Military Research Group who took the photo.

So that's all I've managed to find so far about Thomas Colthart. It would be lovely to be able to add a photograph of Thomas one day. He had lots of brothers and sisters so hopefully there are some descendants of these out there still. It would be lovely to hear from anyone who is related to Thomas Colthart and can perhaps add to his story. If you can add to Thomas' story, please feel free to contact me at: n.rowberry@btinternet.com