Jane Johnstone (nee Saddler) was one of my great great grandmothers. She was born in 1844 in Crawfordjohn, Lanarkshire, Scotland. Her baptism entry reads that she is Jane, the daughter of Jean Colthart and that her father was "reputedly" Thomas Saddler (Saidler).

Since Thomas never married Jean, I have very little to go on to identify him, but fortunately there weren't too many Thomas Saddlers in Scotland at the time. The most likely one based on age and proximity is Thomas Saddler or Saidler born 1824 in Wiston. This Thomas Saidler was the illegitimate son of another Thomas Saidler and Grizel Watson. Thomas Saidler senior subsquently married Elizabeth Weir and had a large family on a farm at Greenhills in Wiston, Lanarkshire. Thomas Saidler junior married Christina Moffat in 1849 and also raised a large family in Wiston - these children would have been half brothers and sisters to my Jane. I've not found any evidence that he kept in touch with his illegitimate daughter Jane, but I hope he did.

Jane Saddler married William Johnstone in 1869. You can read more about the Johnstones here. I believe (but cannot be sure) that the photo below is of Jane Saddler with her daughter Grace Johnstone - it's definitely Grace, but I can't be 100% sure it's Jane. 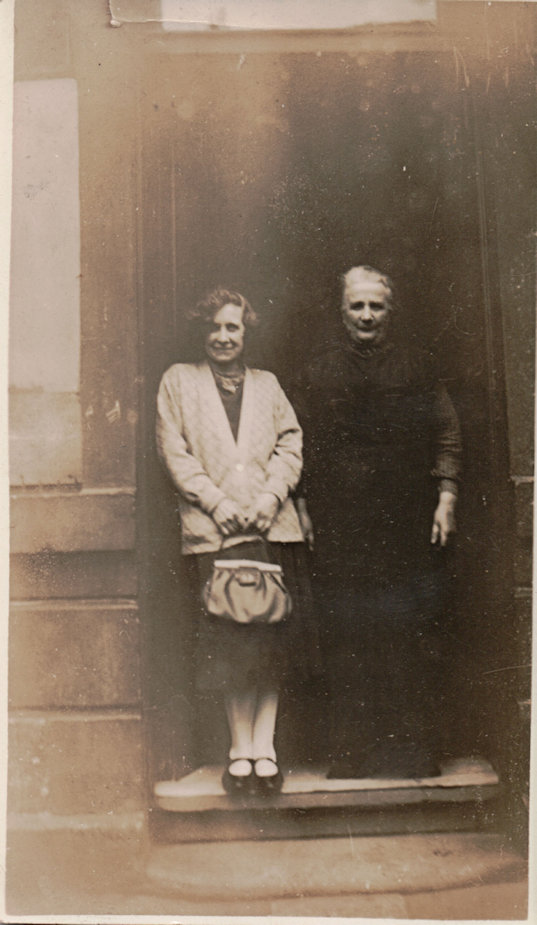 Jane's mother Jean Colthart subsequently married James Hoatson in 1848. James & Jane went on to have at least 7 children together, who would also have been half brothers and sisters to my Jane Saddler. For more information on the Hoatsons please click on the following link:

It looks like Jane Saddler may have been brought up by her Colthart grandparents - she was certainly living with them in the 1851 census. The table below give the transcriptions from the 1851 census (Piece 636 Folio 43 Page 7 schedule 20):


By 1861 Jane was working as a housemaid for a farmer called Edward Watson, still in Crawfordjohn though. Jane married William Johnstone in 1869 in Crawfordjohn with William Colthart (her uncle) as a witness, so she had not been abandoned by the Colthart side of her family at least. For more information on the Johnstones please click on the following link:

Jane's mother, Jean Colthart, came from a large family, the ninth of eleven children born to John Colthart and Jean Gemmel or Gemmell. I was troubled for a long time by the lack of a marriage in the church records for John & Jean, but have recently found the answer. They had an "irregular marriage" - one done without the use (or cost) of a church wedding. They would have declared themselves to be married in front of 2 witnesses and that would have been it done. The church didn't approve of these regular marriages, although they considered them better than no marriage at all. John & Jean were fined 5 shillings, which might have annoyed them at the time, but did at least leave a record of their marriage in the kirk sessions, so useful for their descendants!

John & Jean's first child, Mary Colthart, was born later that year and by August 1805 it must have become apparent that Jean was going to give birth long before the 9 months since the marriage were up. So the poor couple were up again before the kirk sessions charged with "antinuptial fornication" and fined 2s.6d.

Their marriage may have been "irregular" but they almost made it to 50 years of marriage. Sadly John Colthart died in 1854, not only a year before their golden wedding anniversary, but also the year before official registration of births, marriages and deaths. If he'd lived only a year longer his death certificate would probably have given the names of his parents, which would of course have been a big help. But the age given when he was buried (72) indicates a birth around 1782. This fits with a baptism in Crawfordjohn in 1782 of a John Colthart to another John Colthart and his wife ? Brown. Sadly there doesn't seem to be any first name given for the mother - just the surname Brown. I can't find a marriage for a John Colthart to a Brown, nor can I find any other children for this couple. In 1782 John Colthart purchased a mortcloth for Crawfordjohn for his wife, so I'm guessing that poor Brown died shortly after the birth of John. The mortcloth dues indicate only that John senior was a smith of Leadhills. Mortcloths were ceremonial cloths that could be hired (if your family didn't own their own one) from the church to drape over the coffin. There were often different mortcloths available depending on what a person could afford. John Colthart was at least able to pay for the best mortcloth for his wife in 1782.

In the late 1780s and early 1790s there is a John Colthart having children with an Agnes Hislop in the parish of Crawford & Leadhills. The death certificates for 2 of these children indicate that this John Colthart was a Blacksmith too. So I'm reasonably confident that it is the same John Colthart who had John junior in 1782, then married for a second time to Agnes Hislop (although I can't find a marriage) and had a second family. Dues were paid in 1795 for the litter for the corpse of John Colthart in Leadhills, suggesting that he died then. There is a worn table stone in Crawfordjohn churchyard that provides a suggestion that a smith called John Colthart died in 1798 or 95 aged 58. Given this clue to his age, the Colthart family can be traced more or less definitely back to a marriage in 1705 in Crawfordjohn.

There were Coltharts living in Crawfordjohn as far back as the early 1500s; the very earliest being a William Coltart listed at Glentewing in 1512 (many thanks to Allan Colthart for this information). Coltharts appear in various records all the way through the 16th and 17th centuries, but at the moment there is insufficient information to connect them all up into the family tree. But it seems highly likely that our more recent Coltharts are descended from these early ones.

Of John Colthart and Jean Gemmell's family I have managed to trace at least something of the life of all but their first two children Mary and John - perhaps they died as infants? Most of the other children married and had families of their own. The second son William Colthart married twice producing 13 children between the two wives with a span of 41 years between the first and last child. You can see his family on Part 2 of the trees below. William was a woollen hand-loom weaver, a fairly common occupation for a man in Lanarkshire at that time. At least 2 of William Colthart's children emigrated to New Zealand. His youngest son by his first wife, Robert went out there first and then some years later Robert's half sister Mary Hoatson Colthart joined him in New Zealand. Thanks to one Mary Hoatson Colthart's great grandchildren, we have this charming photo of Mary feeding her chickens in New Zealand. 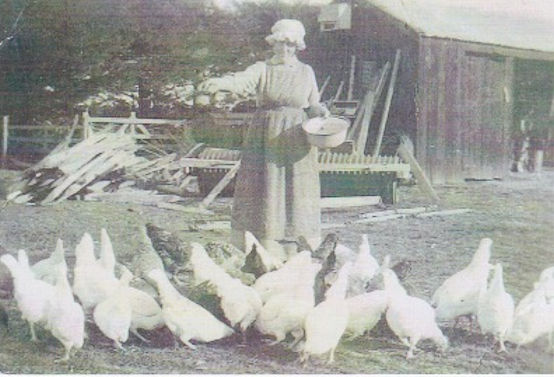 Perhaps even more remarkable is this photo of a sampler, stitched my Mary Hoatson Colthart in 1878 and listing all her family. She lists key people like her parents with their full name, but then all their children and siblings and her grandparents are listed in order by initials. There is a total of 52 people listed on it. Not only has this sampler has survived but it is still owned by Mary's descendants.

Not only do Mary Hoatson Colthart's descendants still have her sampler, but they also have this fabulous riding coat, made with the wool her father William Colthart had woven. 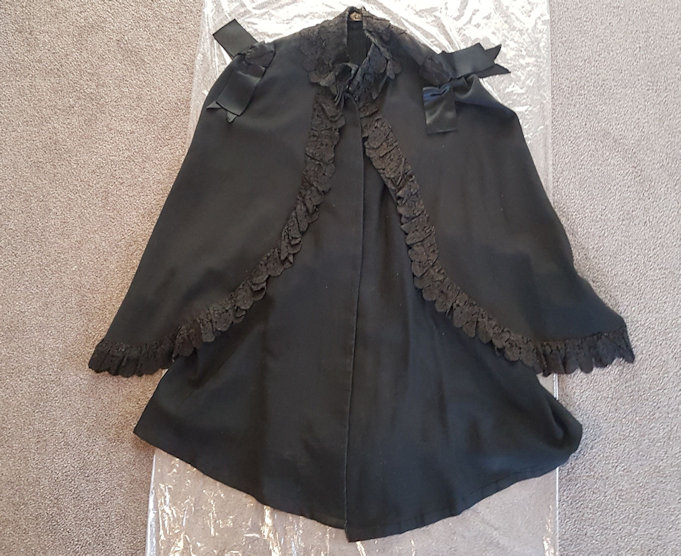 There were many descendants of the Coltharts living in and around Crawfordjohn in the late nineteenth century and the churchyard contains many Colthart gravestones.

John Colthart's wife Jean Gemmell lived until 1869 and her death certificate shows her father to be William Gemmell, a lead smelter and Jean Ballantyne. The lead mining industry was an important one in the area. The parish of Leadhills is within 5 miles of Crawfordjohn and there is now a museum of lead mining nearby. Jean Ballantyne (or Bannatyne/Bannatain - the names seem to be interchangeable in the records) was born in Crawfordjohn in 1749, the sixth known child of James Ballantyne and Janet Thomson who had married there in 1735. Janet Thomson is of particular interest to me, as she is my earliest direct maternal ancestor - my mother's mother's mother etc. back through 9 generations from me to her. This means that Janet and I (and all the women in between) share the same mitochondrial DNA passed from mother to daughter. Sadly I know virtually nothing about her other than her marriage in 1735 and that she had at least 7 children. If James & Janet kept to the Scottish naming pattern for their children, her parents would be John & Elizabeth, but of course there is no guarantee that's what they did. There is a possible baptism in 1713 of a Jenat Thomson in Crawfordjohn, but only the father's name John is given.

Jane Saddler's "reputed" father Thomas Saddler or Saidler went on to marry Christina Moffat and have a family of 7 children, who would all have been half-siblings of my Jane. I've no idea whether the two halves of the family stayed in touch, or whether the other children even knew about Jane. The beautiful sampler (below) was stitched by one of Jane's half-sisters - Elizabeth Saidler. As with the Colthart sampler above, Elizabeth lists her parents and all her siblings in order of birth by their initials, but she does not include Jane. Many thanks to John Paton for sharing the image of this sampler. 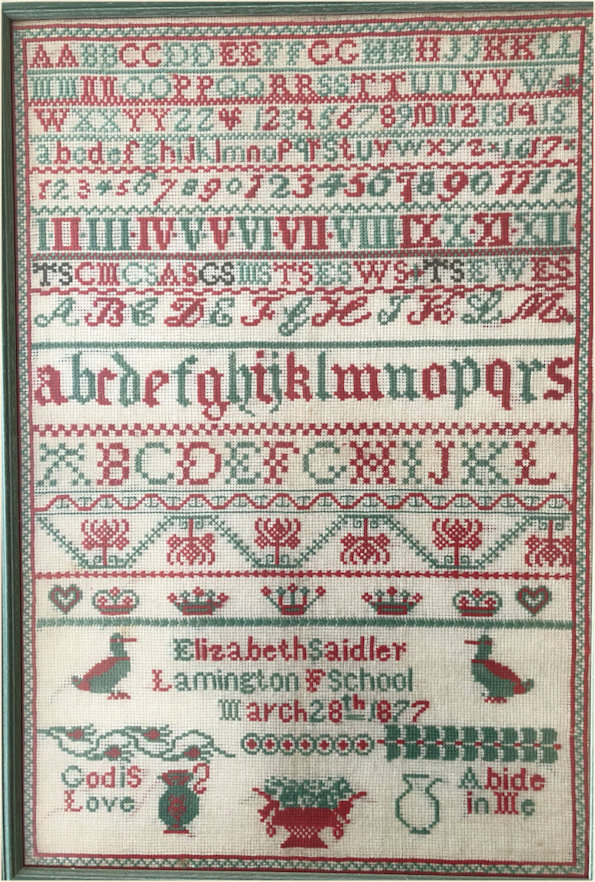 The family tree below summarises what I know about the Colthart family. It is hopefully reasonably accurate, but if you spot any errors, or any relatives, please feel free to E-mail me