This page is dedicated to the memory of Edwin Frederick Stamp who died 12th September 1916 in France. 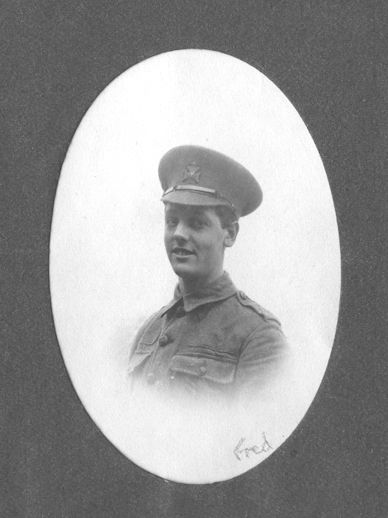 Edwin Frederick Stamp died of wounds on 12th September 1916 in France. He was one of the millions of men who lost their lives in World War 1. It seemed sad for him to have died and all but these bare facts remembered, so I've tried to find out at least a little about his life before his untimely death aged just 20.

Edwin Frederick Stamp was born on the 14th June 1896 at 2 Bedford Place, Malvern Wells, Worcestershire to Albert Stamp and Emily (nee Ruberry). Edwin Frederick (or Fred as he was probably known to the family) was the third child of Albert & Emily who had married in 1887. Fred had 2 older siblings and 3 younger ones, although sadly the youngest, Winifred Stamp, died as a baby. Fred was the only one of the 6 children to be born in the Malvern area, the rest all being born in and around London. Why the family came back to the Malvern area briefly before returning to London isn't known.

By 1901 the family were back in London and living at No. 11 Leybourne Road in East London. Fred's Dad Albert was a tailor and his mother was at home looking after the 4 children. Two more children followed in the next couple of years, before tragedy hit the family with the death of Fred's father and little sister in 1907. Emily was left a widow with 5 children to support. Somehow Emily managed to keep the family together by carrying on as a tailor herself and training up her eldest daughter Lucy. In 1911 the family are all together and living at 79 Harmood Street, between Hampstead Heath and Regent's Park. The property only had 3 rooms so presumably the children had to share a bedroom. The 2 older boys were already working as clerks - Reginald as an Engineer's Clerk and Fred aged just 14 as a junior clerk.

Later that same year the two brothers were witness to a tragic accident where an elderly man was killed after accidentally stepping out into the path of a tram. The report isn't very accurate, getting Albert Reginald's name wrong (calling him Arthur) and the street name wrong too - Harwood when it should have been Harmood Street. It does get Fred's name right though and it must have been a horrible thing for a 14 year old boy to witness. Image © The British Library Board. Image created courtesy of THE BRITISH LIBRARY BOARD. Image reproduced with kind permission of The British Newspaper Archive (www.britishnewspaperarchive.co.uk). 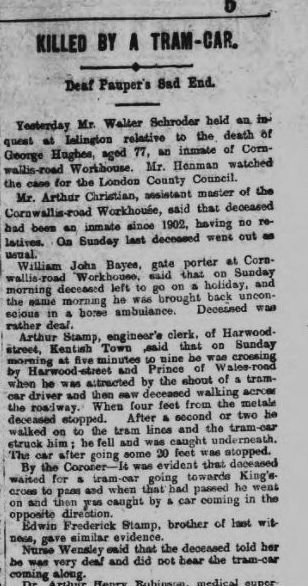 At some point between 1911 and the start of WW1 the family moved to 2 Roderick Road. Fred continued in some form of education even though he was already working at 14. He must have attended the Kentish Town Adult School as he is later commemorated on their war memorial. The photo below shows Fred as a good looking, happy young man probably just before the war. 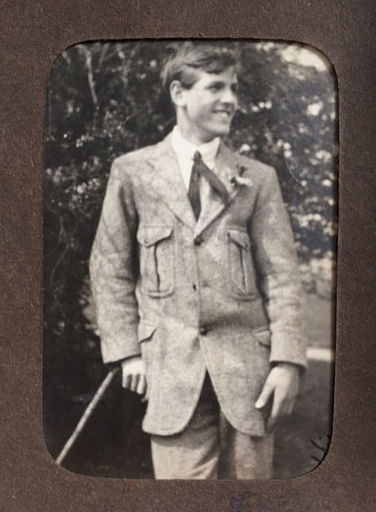 War broke out in 1914 and Fred Stamp must have joined up at least by August 1915. Unfortunately his service records seem to be part of those destroyed during a fire in 1940, so we don't know exactly when he joined up, but his medal card suggests he was serving in France by 17th August 1915. Family sources indicate in February 1916 he was promoted to Lance-Corporal. The Commonwealth War Graves Commission website confirms that he was a Lance Corporal in the 1st/9th Battalion of the London Regiment (Queen Victoria's Rifles). I can't reproduce the CWGC photo of the cemetery, but to see his page please click here

You can now look at many of the Army's War Diaries from WW1 online and Fred's battalion of the London Regiment is one of them. I've transcribed the 2 weeks leading up to his death on 12th April 1916.

The battalion were stationed in northern France and family sources indicate he was injured fighting in the Leuze Wood area. The fighting there was part of the Battle of The Somme and the war diary above makes it clear that his regiment were fighting in the trenches around Leuze Wood. The photograph below is taken from the Leeds Mercury in September 1916 and shows the devastation on the ground around Leuze Wood. Image © Johnston Press plc. Image created courtesy of THE BRITISH LIBRARY BOARD. Image reproduced with kind permission of The British Newspaper Archive (www.britishnewspaperarchive.co.uk). 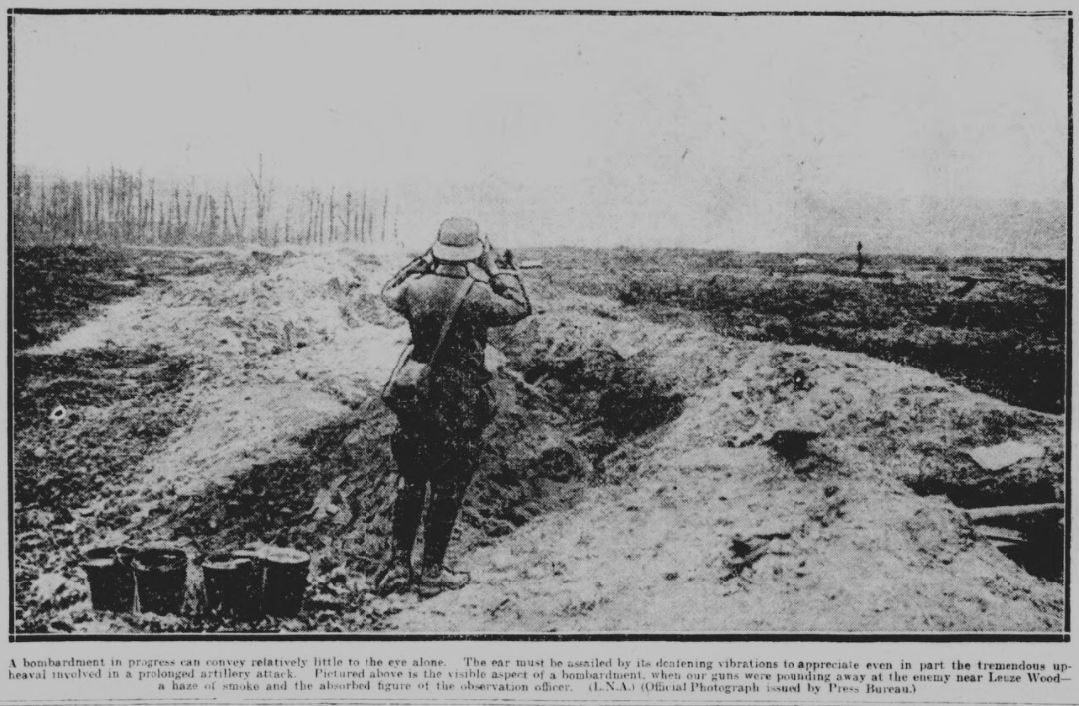 The war diaries suggest that his battalion arrived in Leuze Wood on 7th September 1916, so it is likely that Fred was wounded within the next couple of days. Unfortunately war diaries from this time rarely name the non-officers who were wounded or killed, so there is no specific reference to Fred Stamp. His war records suggest that he was wounded rather than killed immediately in action. It seems likely that he was then moved to a military hospital near Rouen as ultimately when he did die on 12th September, he was buried many miles from where he had been fighting. Fred was buried in the St. Sever Cemetery which was known to be where burials from the military hospitals in Rouen took place.

I've yet to find any reference to Fred Stamp's death in the local papers, but it would surely have been reported. I will just have to keep looking. Thanks to another Ruberry descendant, we now have a photo of his gravestone in France. 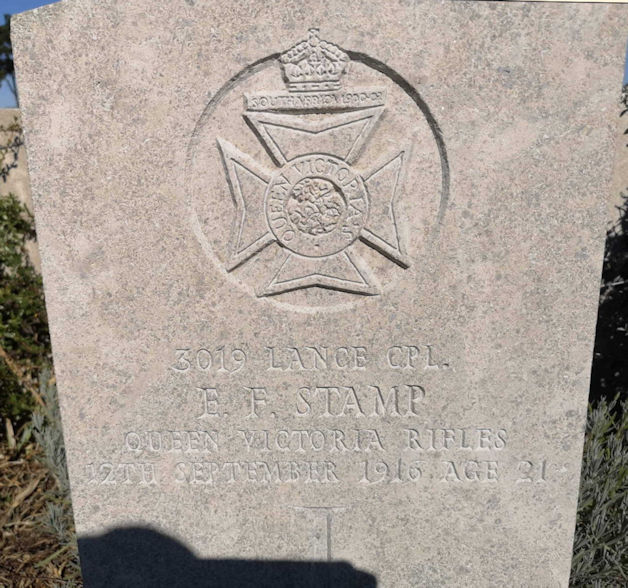 He most probably appears on a war memorial back in London somewhere, but I've yet to find any photos. Thanks to his great-niece though we do have this photo from the Kentish Town Adult School memorial. 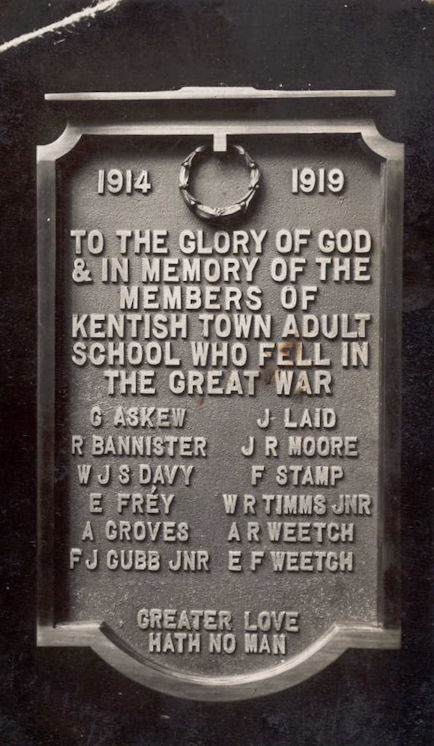 The final piece of documentation I could find for Fred Stamp was his entry in the Army Register of Soldiers' Effects. It lists the amount of money in his account at the time of his death and the amount, including the War Gratuity, that was eventually paid to his next of kin - in this case to his mother Emily. For Freddie the total amount came to just Ł8 10s - such a tiny amount to show for the ultimate sacrifice.

The next of kin for all soldiers who died in WW1 received a memorial plaque and a scroll after the war. They were intended to commemorate their lives and their sacrifice. Edwin Frederick Stamp's scroll has survived and many thanks go to Nicci for sharing the image. 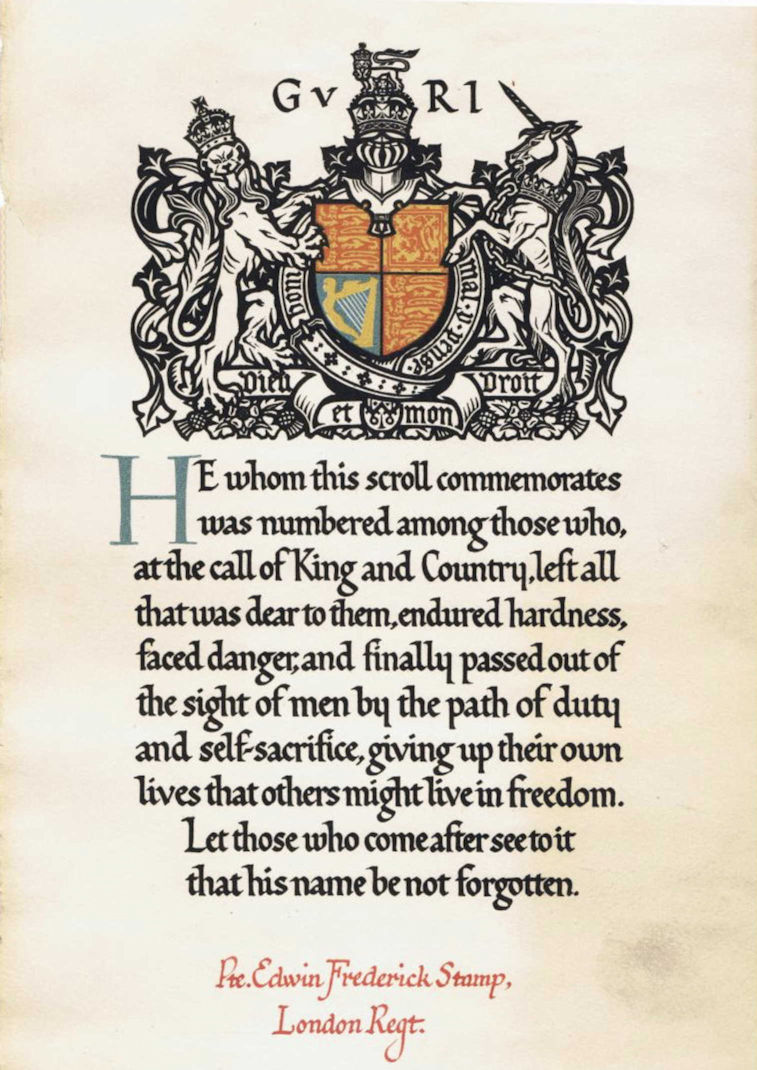 In researching Fred's final days, several sites have been invaluable, so I've included links to some of them here.