This branch of the family begins with Richard Rubry who was born in 1798 the youngest son of John Rowbery and Mary Wilcox. The photo below shows his baptism (bottom line) in Greete, Shropshire.

It looks like Richard's early life was spent in Greete as the family stayed there at least until 1806 when the youngest daughter was born and possibly longer. By the time he married in Ludlow in 1819 he was said to be "of the parish", so may have left Greete when he was old enough to work; Ludlow was only about 5 miles away. 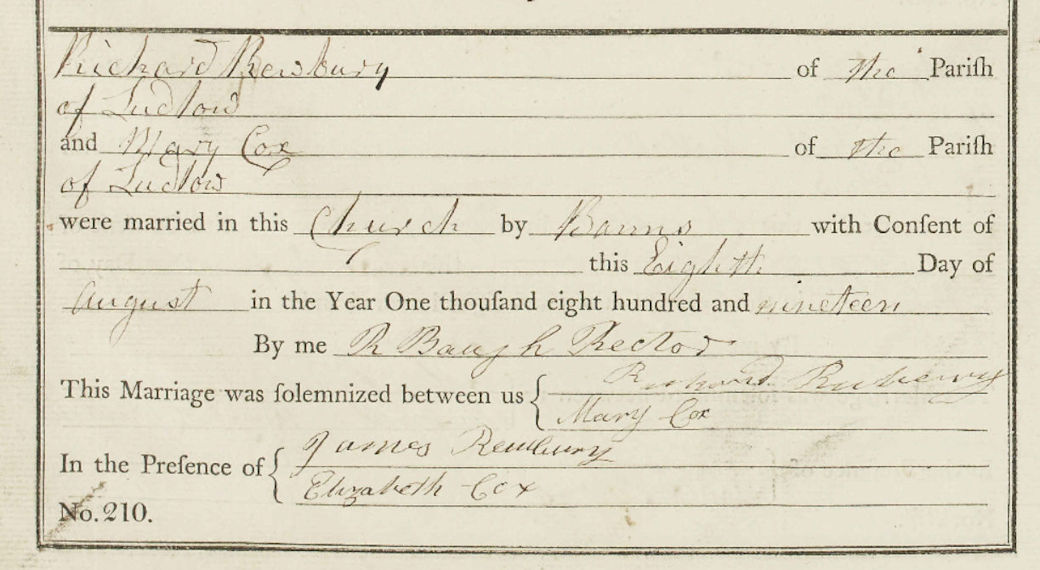 Richard Rubry was a stone mason. He and his wife Mary Cox had 6 children together between 1819 and 1832. It looks as if Mary may have been a bit older than Richard, she is recorded as being between 5 and 7 years older than him in the censuses. They remained in the Shobdon, Herefordshire for the rest of their lives, living in a place called Downwood or Down Wood. The spelling of the surname varied between Ruberry and Rewberry on the different censuses. The table below gives a transcription from the 1841 census. Next to James Rewberry's name the occupation appears to say "Ass" - I'm guessing this means that he assisted his father rather than being some kind of insult. James did later become a mason in his own right so this would make sense.

Richard & Mary both did well for the times, living until they were at least 80. All 6 of their children also survived to adulthood and married, again a success for those times not to have any children die as infants. The youngest son, William Ruberry who was also a mason, seems to have emigrated to Australia in the early 1860s. The rest of the family remained in the UK. The eldest son James (alson a mason) married Esther Cadwalader in Staunton on Arrow in 1851. They too had 6 children, remaining in Staunton on Arrow for many years before moving to Malvern.

There must be quite a lot of descendants from this branch of the Rowberrys/Rewburys/Ruberrys out there. If anyone wants to add anything to this part of the tree, do feel free to get in touch: E-mail me

The family tree below summarises what I know about the above generations of my Rowberry family. It is hopefully reasonably accurate, but if you spot any errors, or any relatives, please feel free to E-mail me