I have been greatly helped in my study of the Lowths, by several other researchers. Much of the information given on these pages has been kindly supplied by one or other of my fellow Lowth descendants, who have all been researching the Lowths for much longer than me. If you wish to contact one of them for further information on the Lowths, try one of the following links: E-mail Glynn Lowth or E-mail Peter Tily. The photograph below of Mary Lowth was kindly supplied by Peter Tily.

Emma Lowth was one of my great great grandmothers. She was born on 1st April 1858 and baptised on 4th April at Scredington, Lincolnshire to William & Mary Lowth (nee Leak). The family can be found at Scredington in both the 1851 and 1861 censuses, although in 1861 the name was spelt Louth. It is unlikely that William Lowth would have been able to read or write, so it would have been up to the census enumerator, to decide as to how the name was spelt. The table below gives the details from the 1861 census (RG9/2346 folio 35 page 1)

Emma was still at home and at school in 1871, but she must have moved to Nottingham at some point, presumably to find work, as she married Thomas James there in 1878. The rest of the family seemed to have remained in Lincolnshire, as William & Mary were still there in 1881, living with their grown-up son William, in the 1881 census at Heckington. The table below gives a transcription from the 1881 census (RG11/3225 folio 73 page 3)

William was a labourer who had married Mary Leak in 1838 in Aswarby, Lincolnshire, but they spent most of their married life in first Scredington then Heckington. William died in 1884 and his death was reported in the local newspapers (Stamford Mercury and The Lincolnshire Chronicle). He had died suddenly in his bed at about 5 o'clock in the morning on 22nd April 1884. Given the sudden nature of his death an inquest was held, but although no medical evidence was given, a verdict of death by natural causes was given. Image © The British Library Board. Image created courtesy of THE BRITISH LIBRARY BOARD. Image reproduced with kind permission of The British Newspaper Archive (www.britishnewspaperarchive.co.uk). 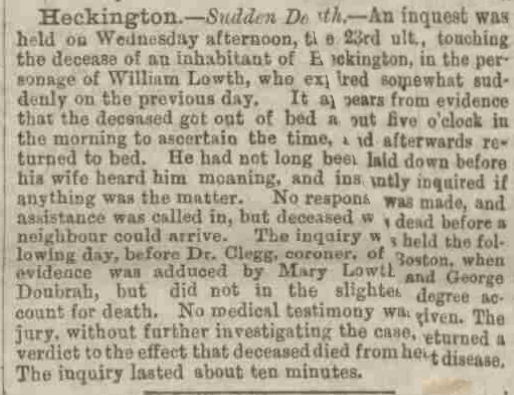 Thanks to the work of fellow researchers and cousins, we've managed to trace the lives of most of William & Mary's other children. Mary Lowth (born 1846) married John Tily and settled in the Croydon area where she remained until her death in 1930. John Lowth (born 1851) married Mary Plank and settled in the Chorlton area of Lancashire. Sarah Lowth married John Kitchen and had at least 2 children before sadly dying aged only 39 in 1881. I don't know what happened to her husband or children after that. William Lowth junior may have gone to America; we're still working on that one. Ann Lowth married John Barrett in Luton in 1863 and settled eventually in the Woolwich area. There was another Ann Lowth who could have been the one to marry John Barrett, but having tracked both Anns through the censuses, I am confident that this is the correct one.

Betsey Lowth married Thomas Alcock in Bury, Lancashire in 1869. One of their grandchildren was John William Alcock who, together with his navigator Arthur Brown, was the first to fly non stop across the Atlantic. I have therefore devoted a whole page to the Alcock connection:

For earlier generations of the Lowth family, click here.

The family tree below summarises what I know about the Lowth family. It is hopefully reasonably accurate, but if you spot any errors, or any relatives, please feel free to E-mail me Much of the information in the tree below had been kindly supplied by a combination of Glynn Lowth, Mel Lowth & Peter Tily, for which I am in their debt. If you do spot any mistakes, please let me know.