John Fraser was my great great grandfather on my mother's side. He was the second of a line of John Frasers. Researching a name like John Fraser in Scotland is not easy and it has taken me a long time to get as far as I have! For details of my earlier Fraser generations, please click on the following link:

John Fraser was born about 1848 in Daviot Inverness-shire, Scotland. I haven't managed to find any record of his baptism yet, so I don't know the exact year of his birth, but on his mother's death certificate in 1855 he is listed as aged six and a half. In 1861 he was living in Boleskine with his widowed father, John Fraser, and older sister Eliza, who was acting as housekeeper. By 1871 John had moved in with his married sister and her husband Roderick Douglas in Dores, along with two of his other siblings. The table below gives a transcription from the 1871 census:

John Fraser seems to have moved about a bit, possibly to find work. When he registered his father's death in 1872, he was said to be living in Edinburgh. But by the late 1870s he must have moved to Longside in Aberdeenshire, where he met and married his first wife Eliza Ann Cooper. They had already had a baby girl who was sadly lost to what sounds like a cot death "suffocation from overlying" before they married on Hogmanay 1879. John was working as a shepherd and it may have been the search for employment that took him to Longside. His younger brother, Alexander Fraser, was already living in the area and had married in Longside in 1875.

In the 1881 census John & Eliza Ann are living at 6 Mount Street West, Aberdeen, with their baby son John Fraser - my great grandfather. John Fraser senior was still working as a shepherd and the family was said to have one room with one window. John Fraser was also said to be a Gaelic speaker. The family must have almost immediately moved to Glasgow, because by the time their second son George was born, they were living in Govan. A third son, Roderick Douglas Fraser was born in July 1884, presumably named after John's brother-in-law with whom he had lodged those years ago. Sadly Eliza died only a week after the birth of her third son, leaving John with 3 small boys to bring up. Unfortunately poor little Roderick died just a week or so after his mother, cause of death described simply as debility from birth.

John Fraser then met and married Catherine Shaw in 1886, but again he seems to have been unlucky in his choice of wife! Sadly Catherine died in Govan on 27th September 1888 having given birth to a son, William Shaw Fraser, eight days earlier. So John Fraser must once again have been left with three small boys to raise alone, something that would have been very difficult in those days. John seems to have done the only sensible thing at the time and given his sons to his sisters to look after. In the 1891 census John junior & George were living in Lasswade with their aunt Jessie & her husband, Roderick Douglas. William Shaw Fraser seems to have gone to live with his uncle & aunt, Joseph & Ann Todd (nee Fraser), also in Lasswade. Sadly little William Fraser succumbed to whooping cough and died there aged only 2 in 1890.

Ever the optimist it seems, John Fraser married again in 1891 to Isabella Grant McDonell. So far I've found the births of 4 of their children. When George Fraser died in 1935, his death was registered by a Jean Fraser, who was described as his step-sister. I searched for a long time for the birth of a Jean Fraser to John & Isabella, but I have since found she was born as Jean Beasley Garner in 1910. So it looks as if the widowed Isabella Fraser must have taken young Jean in and adopted her - either formally or informally. In the 1901 census, John & Isabella and all his surviving children, including the younger John and George, were living together at 25 Ann Street, Glasgow. The table below gives the details from the 1901 census.

John Fraser died in 1909, aged 56 according to his death certificate, but he must have been a good few years older than that. John died in July 1909 and less than a month later, his youngest son Allan Fraser died too. The image below shows the memorial card for both John & his son Allan.

Poor Isabella was left a widow with just her youngest daughter, another Isabella, still alive. Sadly Isabella junior died of TB just 18 months later. So Isabella outlived her husband and her 4 known children. I have yet to find her in the 1911 census, I hope she wasn't all alone. At some point she moved down to the Stockport area in Cheshire, probably to be near her step-son John Fraser. Isabella lived to the grand old age of 91, dying in 1948. The informant on her death certificate was J.B.G Gresty described as her daughter. After a bit of research, I found that she is the same Jean Fraser who was the informant on George Fraser's death certificate in 1935. Both mother and daughter were said to be living at 23 Beech Avenue, Hazel Grove in 1948. But they had stayed in Scotland at least until 1935 when Jean Fraser was said to be living at 47 Scotland Street, Glasgow - the same address that John & Isabella Fraser were living in when he died in 1909.

The younger John Fraser married my great grandmother Grace Johnstone on 15th October 1906 in Glasgow, with his brother George as a witness. For more information on the Johnstones, please click the following link:

The couple initially lived in Glasgow, before the family moved south to Stockport, where John worked for an engineering firm, Mirrlees, Bickerton & Day. When John & Grace married in 1906, John was said to be living at 47 Scotland Street. This property was actually owned by a company called Mirrlees Watson & Co. In 1908 Mirrlees Watson & Co. changed their name to Mirrlees, Bickerton & Day and decided to open a new factory in Hazel Grove, Stockport. This ties in with John Fraser's arrival in Stockport between 1908 & 1909, suggesting Mirrlees took some of their Scots workers down south with them. The photo below shows John Fraser at the Mirrlees factory in Stockport. 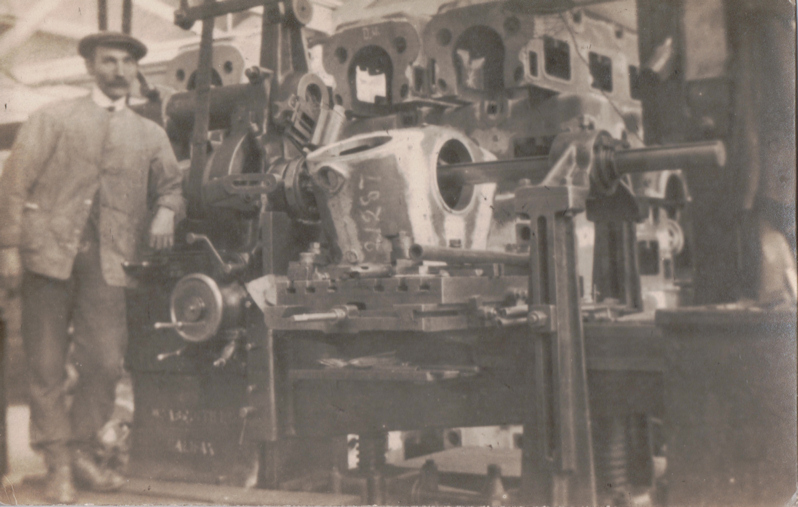 The table below shows the extract from the 1911 census, showing the family living at 41 Great Moor Street, Stockport. I love that John Fraser was described as Boring Machine Man - hopefully that is his job title rather than a reflection on his personality!

The first two children were born in Glasgow, but by the time Grace Fraser was born in 1909 they were living in Stockport. John must have had fond memories of his time spent living with his uncle, as he named his youngest son after him - Roderick Douglas Fraser. The family lived for many years at 1 Castle Farm Lane, Great Moor, Stockport. John died in Stockport at the relatively young age of 42. He seems to have been well liked and respected in the neighbourhood, the newspaper report of his death described him as "widely known and esteemed in the district, his courteous and genial disposition having gained him many friends." Indeed one of his co-workers even wrote a poem in his memory which was printed in the paper - In Memory of Johnny Fraser. For a full transcription of the poem, please click here

His eldest daughter Dorothy (my grandmother) married Leslie James in 1931 in Stockport. For more information on them, please follow this link:

John Norman Fraser (Uncle Jack as I remember him) never married, but spent much of his life living with my grandparents. Grace Fraser married Jim Burdett, but sadly they both died during the Second World War. Jim Burdett was a gunner for the Royal Artillery and is buried at El Alamein Cemetery. The youngest of the family Dougie Fraser was a keen sportsman. He played football for Hazel Grove Celtic and died on the pitch after being struck in the chest by the ball, aged only 38. Doug had only been married a short time to Anne Elizabeth Mulholland Cromie and left behind a small daughter.

John & Grace Fraser are buried in Stockport cemetery. Commemorated with them are their daughter and her husband Grace & Jim Burdett and their son Doug and his wife Anne. The photos below show how the grave looks now and how it looked some years ago. 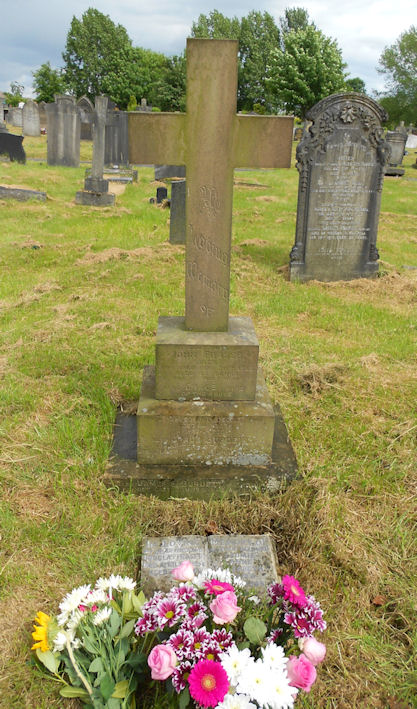 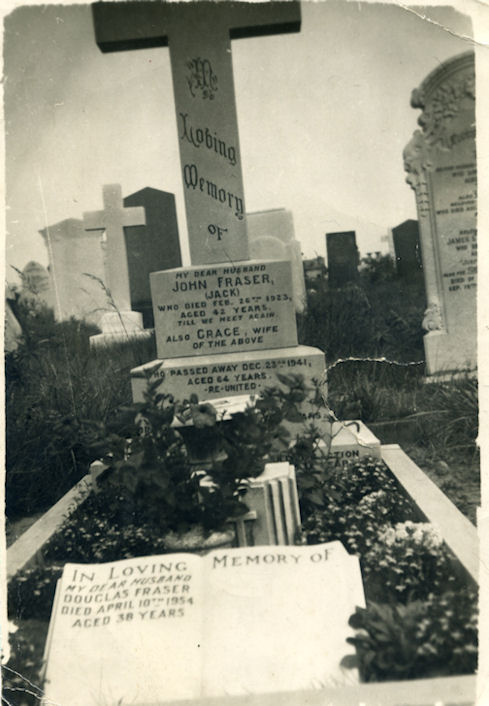 The family tree below summarises what I know about the Fraser family. It is hopefully reasonably accurate, but if you spot any errors, or any relatives, please feel free to E-mail me

Please click on one of the following links to move to a different page: