This page is dedicated to the memory of Edwin Charles Rowberry who died on 17th August 1918 near Borre, France. 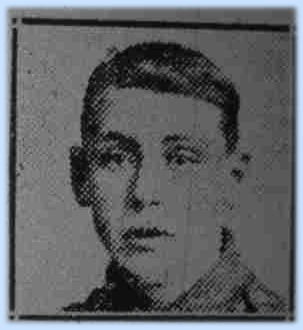 Edwin Charles Rowberry was the cousin of my grandfather Alfred Rowberry. He was born on 20th February 1897 in Nantyglo in Monmouthshire, the fourth son of Alfred George Rowberry and Elizabeth Rees. He died on 17th August 1918 in France, one of the many millions of men who lost their lives in World War 1. It seemed sad for him to have died and all but these bare facts remembered, so I've tried to find out at least a little about his life until his untimely death aged just 22.

Edwin’s father Alfred Rowberry was a shoemaker from Hereford who had settled in Nantyglo. In 1901 the family were living in Wesley Buildings. Sadly in 1909 Edwin’s father died aged just 40, leaving his wife with several young children to bring up alone. By 1911 the older boys, including Edwin, were still living at home but working as coal miners. So Edwin aged just 14 was already going down the mines to bring home money to help his widowed mother.

The Commonwealth War Graves Commission website revealed that he was a private in the 1st/2nd Battalion of the Monmouthshire Regiment that his service number was 267530 and that he was buried in the Borre British Cemetery in France. I can't reproduce the CWGC photo of the cemetery, but to see his page please click here


As is so often the case with these medal cards, not all of the information has been filled in, but it does indicate that he would have been entitled to two medals. The British Medal was awarded to servicemen who served in a theatre of war between 5th August 1914 and 11th November 1918. The Victory Medal (Allied Victory Medal) was awarded for service in any operational theatre over the same time frame. Thanks to a very kind collector of Monmouthshire Regiment medals, Graham, I now have Edwin's medals back in the family. The one on the left is the British Medal and the one on the right the Victory Medal. 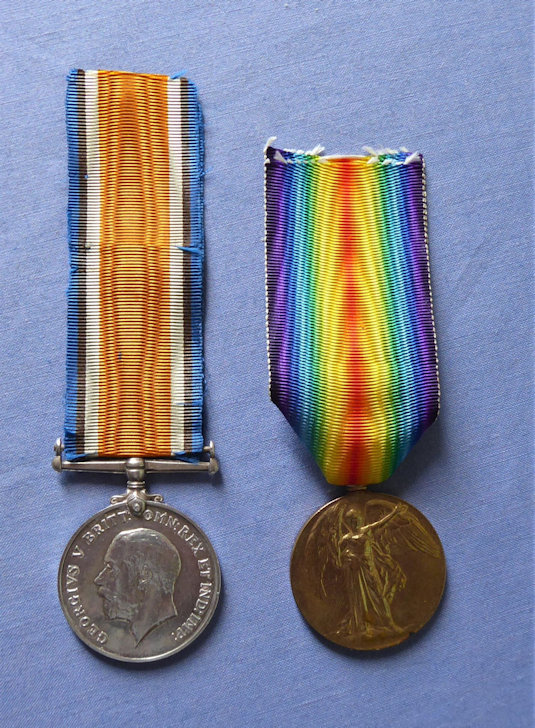 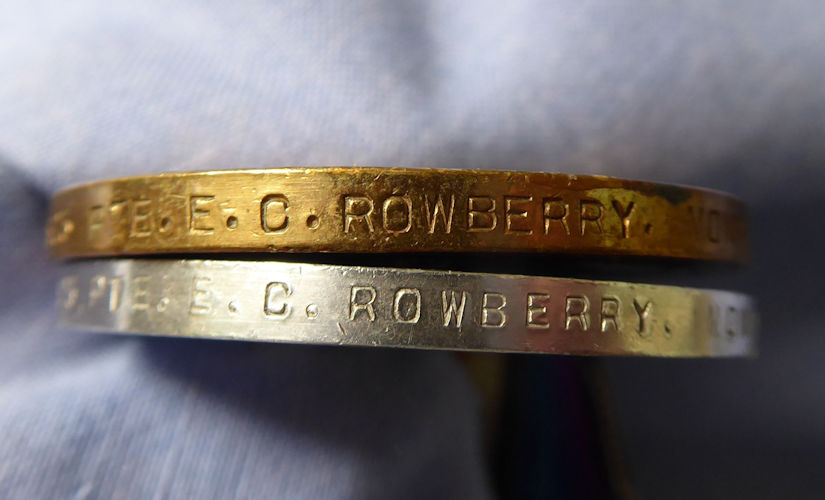 Edwin's service records give so much information that can be found nowhere else. He volunteered at Brynmawr on 29th October 1914. Initially he joined the South Wales Borderers Regiment and was allocated to the regiment’s 3rd/1st Breconshire Battalion which was initially a training battalion. In 1916 the 3rd/1st moved to Milford Haven and became a reserve battalion. In July 1916 the battalion, including Edwin, was transferred to the 1st/2nd Battalion of the Monmouthshire Regiment at which point he was sent to France. The records show various periods spent in military hospital when he was sick. Most of the time the records don't say what was wrong with him, but on at least one occasion he was suffering from scabies, a common condition in WW1. The treatment took about 4 days and involved multiple baths and various sulphur treatments, before being given clean clothes and bedding. His last leave was from 30th October to 9th November 1917 - the last time presumably his family saw him. The records go into great detail about his surviving family listing not only his mother, but his 4 surviving full blood brothers, 2 sisters and 2 half brothers, his grandfather Reece and his Uncle Albert Edward Rowberry - my great grandfather.

Edwin was said to be 5 feet 2 inches tall, with good vision and fair physical development. They described his apparent age as 18 although in fact he was only 17 when he joined up. One of the most interesting pages is the one that details various minor offences for being absent without leave for which he was mainly confined to barracks. These all occurred in 1915, when he was still in the UK. The last one on 10th September 1915 was broken down into 3 offences - 1. Breaking out of camp and remaining absent until 11.10pm. 2. Breaking back into camp. 3. Creating a disturbance when he came back. For these heinous crimes he was subject to 168 hours of Field Punishment No.2 which meant he was placed in handcuffs and lost pay. I hope he had a good time while he was out.

There is a really sad entry amongst the service records which details Edwin's personal effects that were returned to his mother after his death. They include letters, photos, 2 pipes, a wallet, a religious book, cards & a fountain pen. His mother also had to sign a receipt for his British war medal and Victory medal when she received them.

In trying to find out more about Edwin's last days in France, I've looked at the War Diaries for the Monmouthshire Regiment at the National Archives. War Diaries were kept as a daily record of operations, intelligence reports and anything else that was going on for a given battalion. I've transcribed the relevant war diary for the day of Edwin's death below. I've also transcribed the day before - to give a feel of what Edwin must have been doing in his final days.


I have been very lucky in that my cousin Jim Baldwin researched the history of the Monmouthshire regiment for me, putting the events detailed in the war diaries into context. Thanks to Jim I now know that L'Hoffand where Edwin died is an anglicised version of L'Hoflandt which is a district on the edge of Hazebrouck on the road to Borre. Borre itself was an ambulance dressing station and inevitably this led to the military cemetery being created nearby. The Monmouthshire Regiment was a Territorial Regiment which means it was made up entirely of volunteers. The regiment came under the orders of the 87th Brigade (one of the brigades of the British Army’s 29th Division). The 1st/2nd Battalion was a Pioneer Battalion providing support to the various regiments of the 87th Brigade (from 1916 onwards). From earlier entries in the battalion’s war diary it is clear that Edwin's battalion were actively involved in many of the major battles of the war such as at the Somme offensive of 1916, the 2nd and 3rd battles of Ypres and in spring 1918 the battle of Hazebrouck. Edwin was perhaps lucky to have survived as long as he did.

When I first started reading War Diaries I thought it was so sad that although the dead officers were named, the other ranks were just recorded by numbers - so Edwin Rowberry wasn't mentioned by name. But this seems to have been standard procedure and perhaps the officer recording the events either didn't have the time or the information to record any more detail. So I don't know how Edwin came to be killed - whether he was shot doing reconnaissance or perhaps he was the victim of enemy mortar fire.

For a long time, I didn't have a photo of Edwin, but a trawl of the internet found Shaun McGuire's excellent website in which he has compiled photos from local newspapers of the men & women of Monmouthshire who went to war. I was delighted to find this photo of Edwin taken from the report of his death in the South Wales Argus in 1918. If you have other relatives from Monmouthshire who fought in WW1, do have a look at Shaun's site, you may be lucky and find a photo too: click here 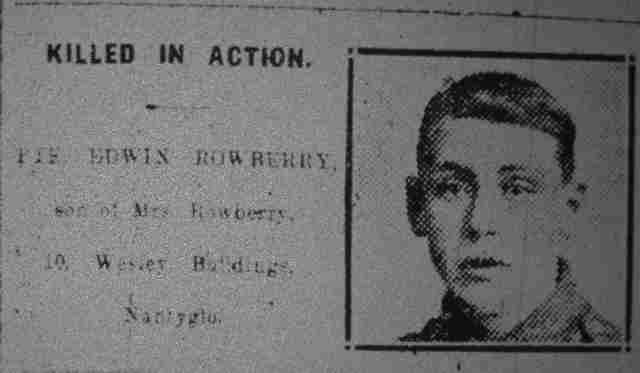 I have now found this second report of his death in the Western Mail 7th September 1918. Image © Trinity Mirror. Image created courtesy of THE BRITISH LIBRARY BOARD. Image reproduced with kind permission of The British Newspaper Archive (www.britishnewspaperarchive.co.uk). 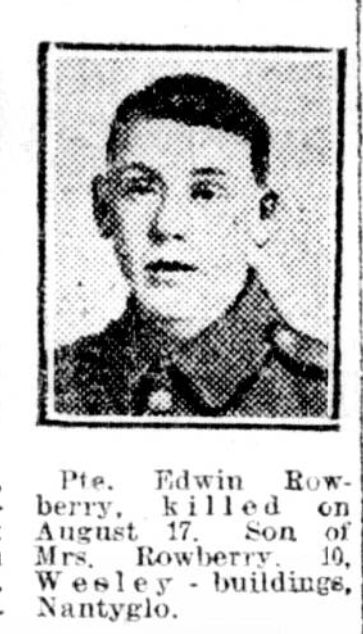 Edwin doesn't seem to have died in a specific battle or attack, so there is no dramatic newspaper report of the activities in France on that day. His death was one of the day-to-day casualties, noteworthy probably only to his grieving family.

Edwin Rowberry’s headstone is in Plot II, Row G in the CWGC’s Borre British Cemetery on the eastern outskists of Hazebrouck in northern France. I haven't had the chance to go there myself yet, but thanks to the generosity of a very kind lady called Carol, I now have the photo below. Carol went to Borre to pay her respects to a member of her own family, but by chance took a photo that included Edwin's gravestone. When she happened upon my website and realised she'd got the photo, she very kindly sent me the image. 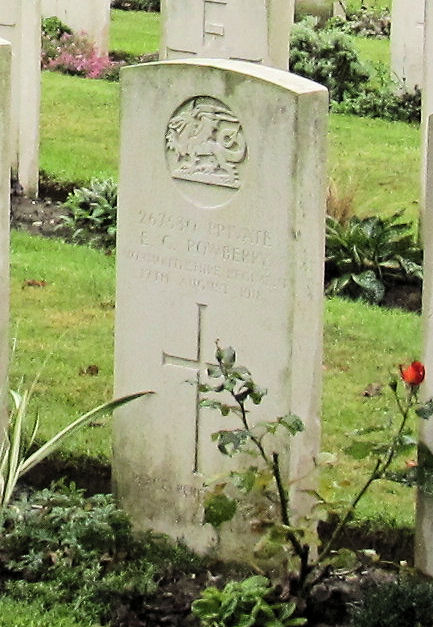 In an update to the above photo Carol returned to Borre in 2016 and not only took further photos of Edwin's grave for me, but incredibly kindly placed a red poppy she had crocheted herself next to his grave. Even more moving she placed a small cross with a message of remembrance from his Rowberry cousins. Carol - I can't thank you enough! 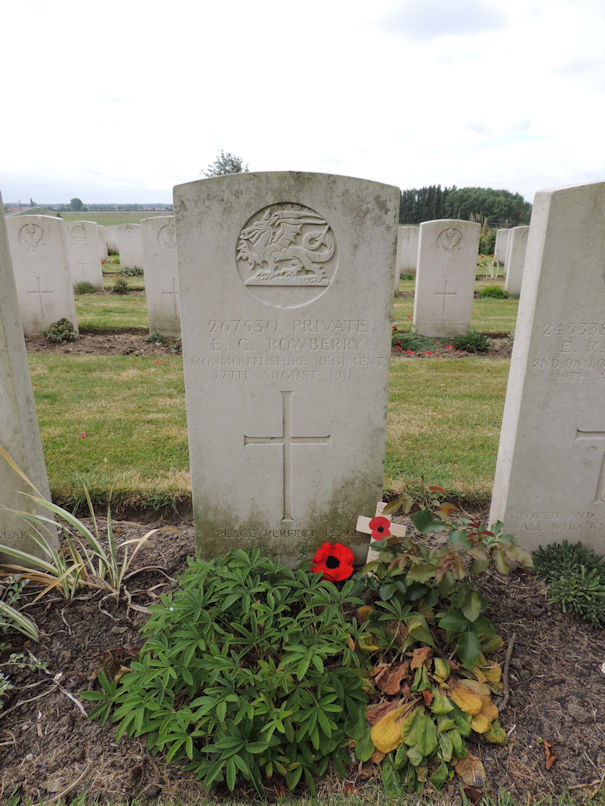 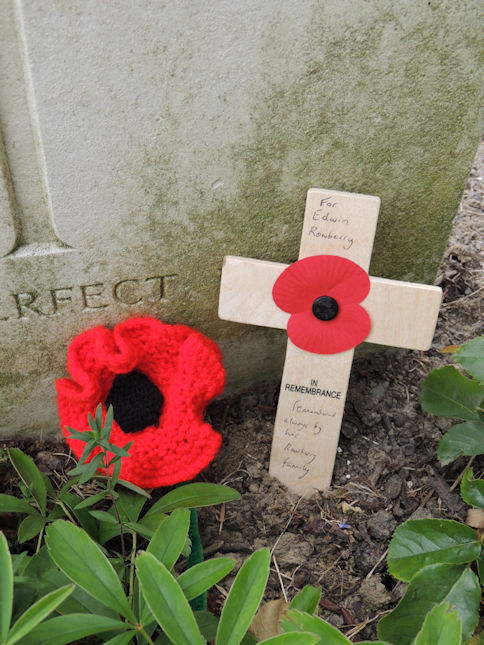 I do have photos of another form of memorial for Edwin. The government of the time decided to issue a small bronze plaque to the next of kin of all fallen British servicemen and women. A couple of years ago Edwin's plaque appeared on Ebay and we managed to buy it. Unfortunately they spelled his name wrong and put Edward Charles on the plaque instead of Edwin, but as the only Edward Charles Rowberry we know of was born 30 years after the end of the war, this plaque must be our Edwin's. 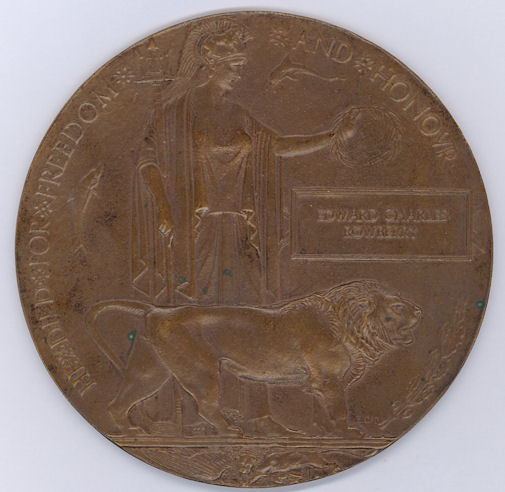 Edwin was remembered back home on two local War Memorials - Holy Trinity Church WW1 Memorial plaque in Nantyglo and Blaina & Nantyglo War Memorial in Blaina. This week (August 2021) I went to Blaina & Nantyglo, hoping to photograph the 2 memorials. The Holy Trinity Church had been demolished but the WW1 plaque had been moved to St Anne's Church also in Nantyglo - unfortunately the church was shut, so no chance of a photo. The Blaina memorial was in an open park with about 8 black marble panels listing the names of the men and women who died. Sod's law being what it is, the panel with Edwin's name on was missing - either damaged or vandalised. So I could only take a photo of the memorial with Edwin's photo propped up where his name should have been. 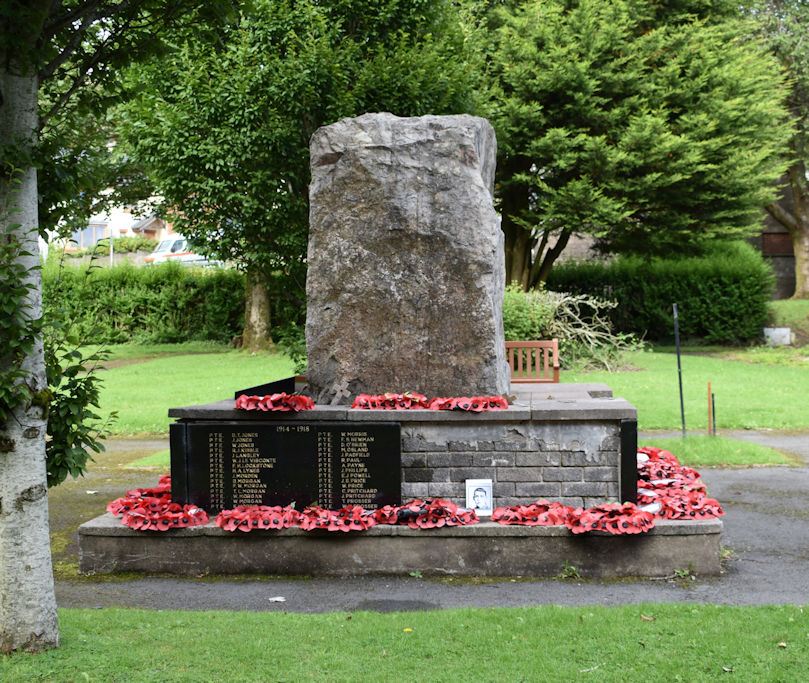 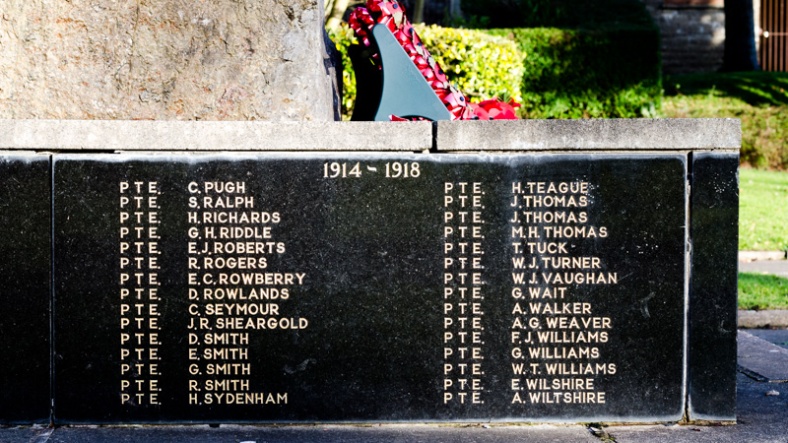 Another purpose to our trip to Blaina was to reunite Edwin's Memorial Plaque with his medals - thanks to Graham again for this. So although we couldn't photograph everything next to Edwin's name on the Blaina War Memorial as I'd hoped, we were able to photograph the other items together; probably the first time they had all been together for many years. 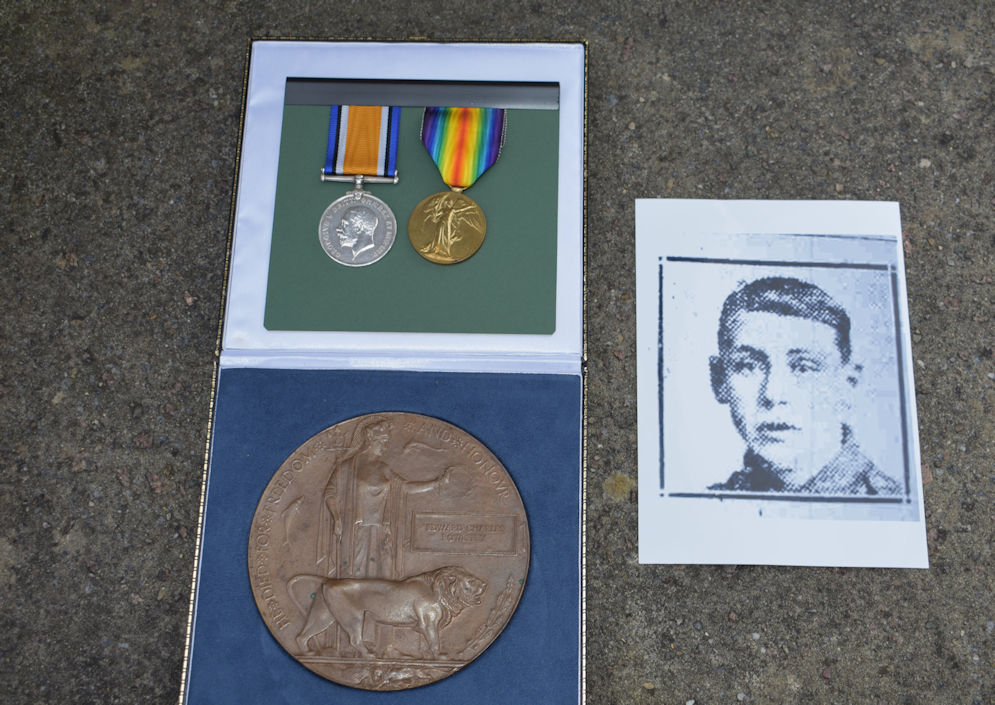 In researching Edwin's final days, several sites have been invaluable, so I've included links to some of them here.