Alfred George Rowberry was born on 24th October 1868 in the Whitecross area of Hereford and baptised at All Saints church. He was the fourth of seven children born to James Rowberry and Jane Probert and an older brother to my great grandfather Albert Edward Rowberry. In 1871 he was living, with the rest of the family, at Ox Cottage, White Cross Street, Hereford. By 1881, his mother had died and the family had moved to Lawns Terrace, Whitecross, but without Alfred. He was living at the Working Boys Home in Hereford, aged 12 and still at school. In 1878 his father had been reprimanded by the authorities for not ensuring Alfred's older sister Alice went to school, with the result that she was sent to an Industrial School in Gloucestershire. Presumably something similar happened with Alfred and he was sent to the Working Boys Home. The boys at the school were taught trades like shoemaking and this maybe why Alfred was a shoemaker later in life.

At some point during the 1880s Alfred must have moved to Wales, perhaps to find work. He married Elizabeth Rees in 1889 at the Salem Chapel in Porth near Pontypridd. In 1890 they were living in Tylors Town, Glamorgan when they had their first child Wyndham Rowberry. In 1891 Alfred seems to have managed to get himself recorded twice in the census. In one he is recorded as visiting his sister Ellen White (nee Rowberry) and her husband George in Rogerstone. But he is also recorded at home with his wife and baby Wyndham in Tylorstown. Between 1890 and 1894 Alfred worked as a coalminer, but by the 1901 census, he is described as a shoemaker - the same occupation as his younger brother Charles. The table below shows the details transcribed from the 1901 census:

Alfred & Elizabeth were lucky for those days in that all of their children apart from little Oswel Rowberry lived until adulthood. Of the remaining 7 children all but Edwin married and produced children, so there must be a lot of descendants out there - I'd love to hear from some of you?

At least 3 of the boys fought in World War 1. Alfred George Rowberry junior fought for the Welsh Regiment and was discharged in 1916. James Emlyn Rowberry also fought for the Welsh Regiment. I don't know when he was discharged but at least he survived the war. Edwin Charles Rowberry joined up in 1914 and fought for the Monmouthshire Regiment. Sadly poor Edwin did not make it back home, but died in France on 17th August 1918 and is buried in the Borre British Cemetery. For more information on Edwin Charles Rowberry and his time during the war please click

The photo below was given to me some years ago by a grandson of Alfred and Elizabeth and shows 3 of their children - Albert Edward, Ellen and Mary. Looks like they might be hop picking. Hover the cursor over the faces to see the names. 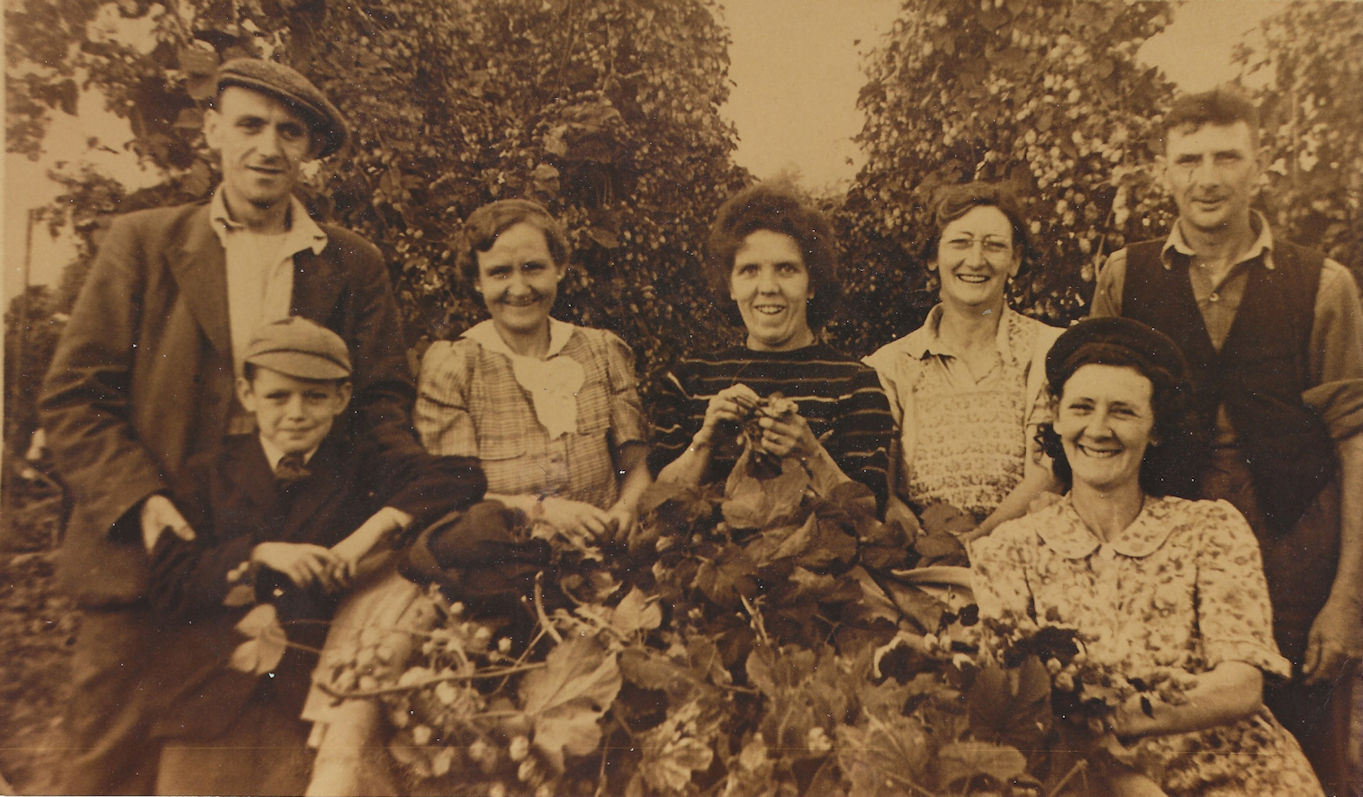 My father remembers his father visiting relatives in Wales, so the family must have remained in touch with their relatives back in Herefordshire. One connection I do like is that both Alfred George & his brother Albert Edward called one of their sons Wyndham - the only 2 Wyndham Rowberrys there are!

The family tree below summarises what I know about the above generations of the Rowberry family. It is hopefully reasonably accurate, but if you spot any errors, or any relatives, please feel free to E-mail me