Eliza Brooksbank was one of my great, great grandmothers. She was born in 1849 in Nottingham, the eldest child of William Brooksbank and Louisa Whitehead. The first record I have of her is in the 1851 census, living with her parents at 6 Crosland Street, in Nottingham. William & Louisa who had married in March 1849 at Nottingham St Mary and Eliza was born soon after. William was described was a Stocking Maker and Louisa was a dressmaker. Living next door to them, at 5 Crosland Street, were William's parents Henry & Hannah Brooksbank. The table below gives the details from the 1851 census. (Ref H0107/2133 folio 129)

By 1861, William, Louisa and family had moved along the road a bit to 33 Crosland Street. William was employed as a Cotton Framework Knitter, and Eliza was already employed, at only 12, as a Silk winder. The table below gives the details from the 1861 census.

At only 17, Eliza married John Shepherd at Nottingham St Mark's on 11th November 1866. Their first child was born less than 6 months later. They went on to have 12 children in total, all but one of whom survived to adulthood. One of these was my great grandmother Ada Louisa Shepherd. Below is a photo believed to be of Eliza Shepherd, nee Brooksbank. The original photo belongs to one of Eliza's great great grand-daughters through her son George Shepherd. We think it is Eliza, but if anyone can corroborate it, that would be great. 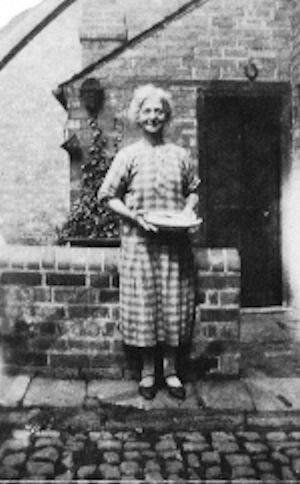 For more information on the Shepherds, please click the following link:

Eliza's father, William Brooksbank died on 8th July 1872 when, after drinking, he went swimming and drowned in the River Trent. An inquest was heard on 10th July and his death was reported in the Nottingham Journal, as shown below in the newspaper cutting that was kindly given to me by fellow researcher and Brooksbank descendant June.

His widow Louisa was still living in Crosland Street in 1881, although by this time she had moved to number 11, with two of her sons, John & Arthur. John & Arthur appear never to have married, as after the death of their mother in 1885, they are living, unmarried, with their married sister Emma Aylott.

Eliza's father William was the son of Henry & Roseanna or Hannah Brooksbank. Henry was also a frame-work knitter, who lived at Poplar Square, Nottingham in the 1830s. Henry and Hannah married in 1829 at Nottingham St Mary's, at which point Hannah gave her name as Roseannah Corp. Hannah was presumably the abbreviation for Roseannah, and it was by Hannah that she seems to have been known for most of her life. You can read more about the Corp family here:

In 1861 Henry & Roseanna/Hannah were also living in Crosland Street, Henry still working as a framework knitter and Hannah as a nurse. The table below gives their details from the 1861 census.

By 1881 Henry was a widower, still in Crosland Street. Hannah had died, I think, in 1873 and Henry was living with his unmarried daughter Mary. On the 1891 census Henry and Mary have been joined at Crosland Street, by Lizzie Parker, who was described as Henry's niece aged 15. I have yet to work out exactly how Lizzie fits into the picture. Henry died in 1892 still living in Crosland Street. His death was listed under the announcements in the Nottinghamshire Guardian - quite unusual for a fairly poor family to do such a thing. Hopefully it means he was much loved.

The family tree below summarises what I know about the above generations of the Brooksbank family. It is hopefully reasonably accurate, but if you do spot any errors, or any relatives, please feel free to E-mail me

Please click on one of the red links on the tree to move to a different page. For earlier generations of Brooksbanks, please click on either the red Henry Brooksbank link, or the link at the bottom of the page.