This page is dedicated to the memory of William Alfred Rowbury who died on 26th September 1916 in France. 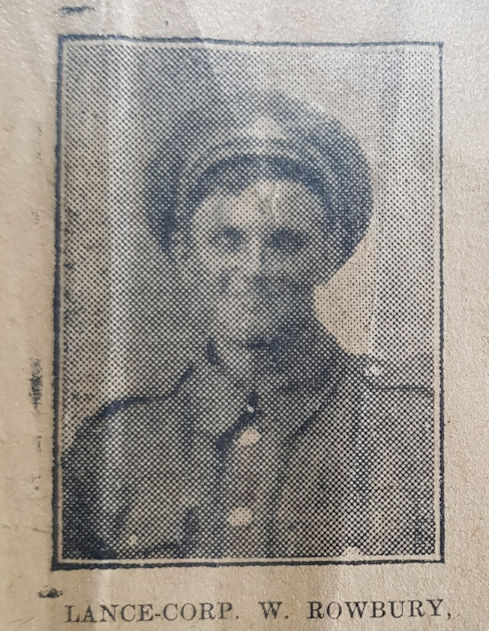 William Alfred Rowbury was born in 1890 in Romford, the eldest son of John Rowbury and Ellen Holder. He died on 26th September 1916 in France, one of the many millions of men who lost their lives in World War 1. It seemed sad for him to have died and all but these bare facts remembered, so I've tried to find out at least a little about his life and what happened to him in the war.

William was born in 1890 somewhere in the Romford area, to John Rowbury (sometimes known as John Henry Rowbury) and Ellen Holder, who had married in Hackney in 1887. I've not found the family in the 1891 census, but by then John & Ellen had two children - William and his sister Ellen. John seemed to have followed his father into the market gardening business - this at least is what he was doing in 1901 and 1911. By 1911 the family were living in Enfield and William was working in the market gardening business too.

At some point in 1914 the father John seems to have left the family. William, as the eldest son, would have been left as the man of the household. It must have been a further blow to his mother then, when shortly after the outbreak of the war, William enlisted on 3rd September 1914. He must have been one of the earliest to enlist and would have done so of his own free will.

The Commonwealth War Graves Commission website revealed that he became a Lance Corporal in the 12th Battalion of the Middlesex Regiment, that his service number was G/2846 and that he was commemorated on the Thiepval Memorial in France. I can't reproduce the CWGC photo of the cemetery, but to see his page please click here

You can now look at the Medal Roll cards from the first world war online. These show a soldier's name, rank and what medals they were entitled to. Due to copyright issues, I don't think I can reproduce the image of the medal card, so instead I've transcribed it. I believe the P.D under the remarks column, indicates "Presumed Dead".


The index card indicates that he would have been entitled to three medals. The British Medal was awarded to servicemen who served in a theatre of war between 5th August 1914 and 11th November 1918. The Victory Medal (Allied Victory Medal) was awarded for service in any operational theatre over the same time frame. The 15 Star was awarded to all those who served in any theatre of war against Germany between 5th August 1914 and 31st December 1915.

Fortunately William's army service record is one of relatively few that have survived (many were lost during a bombing raid in WW2). The service record provides a wealth of information and shows that although he enlisted as a Private in September 1914, by January 1915, he'd been promoted to Lance Corporal. It also gives a physical description of him - he was apparently 5 foot 7, weighed 130lbs, with blue eyes, brown hair and a fresh complexion. The service record also gives details of his immediate family. He wasn't married, but it lists his mother and 4 of his siblings. His father is described as "Deserted wife 1914. Whereabouts not known". His father had actually set up home and had another family, but I've no idea whether William knew that at the time.

Ultimately of course the service document records his death. He was reported "wounded and missing" on 26th September 1916 - sadly this was later changed to "Death Presumed" for the same date. The family were told that he was on a mission as a signaller with another soldier when he was wounded. The other soldier had to leave him in a crater/shell hole. When his brother John found out, he went into No Man's Land to try to find him, but was unable to trace him.

You can now download most regimental war diaries from WW1, so I've looked at the War Diaries for the 12th Battalion of the Middlesex Regiment. The Middlesex Regiment were heavily involved in the Battle of the Somme and it was in part of this (the Battle of Thiepval Ridge) that William died. War Diaries were kept as a daily record of operations, intelligence reports and anything else that was going on for a given battalion. The diaries can make harrowing reading. There are descriptions of a tank accidentally shooting its own men who were in front of it and crushing wounded men who could not get out of the way. Men were buried in the mud under heavy bombing and many were never found. William was presumably one of these. The diaries record messages of "Congratulations" from the military leaders for the success at Thiepval, but it came at heavy costs to both sides. That day alone the regiment lost 10 officers and 60 other ranks killed, with 233 more men wounded and 121 missing - William must have been one of those missing. The officers who died are all detailed in the diary, but the ordinary soldiers are not, just their total numbers of dead given.

I don't know when his mother would have been informed that he was missing, or how soon after that he would have been presumed to be dead. This article appeared in a local Enfield newspaper. The newspaper cutting has obviously been kept in the family ever since and this copy kindly given to me by William's great nephew. William's poor mother was obviously clinging to the hope that he was somehow still alive and asking for information about him. 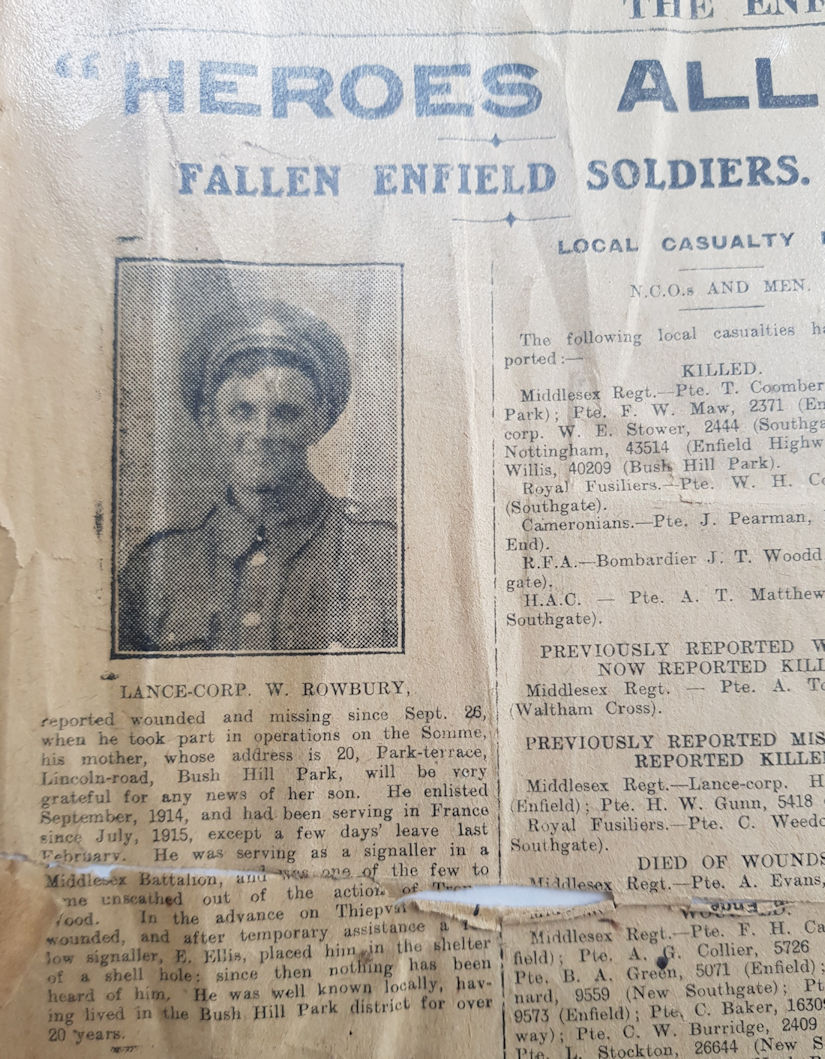 The last piece of evidence for William is the Army Register of Soldiers' Effects. His mother Ellen Rowbury is listed as the sole beneficiary of what little money he had (just Ł2.3.10), plus the War Gratuity.

William is remembered on the Thiepval Memorial in France. Thiepval is the Memorial to the Missing of the Somme - some 72000 men who have no known grave. Thanks to the kindness of Jim Baldwin we now have this photo of William's name on the Thiepval memorial. 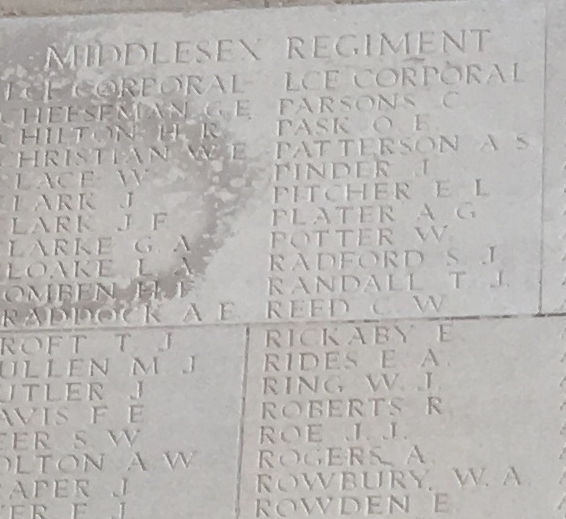 Researching William has proved more difficult than some of the soldiers I've looked at. Until his great nephew gave me a copy of the entry from the Enfield newspaper, I had been unable to find any mention of his death in the newspapers and I haven't found out which War Memorial back in England he is commemorated on. So if there are any more relatives out there, please do get in touch, it would be lovely to hear from you. Please feel free to contact me at: n.rowberry@btinternet.com