This page is dedicated to the memory of George Edwin Rowberry who died on 20th September 1914 when the HMS Pegasus was fired upon by a German cruiser off Zanzibar.

George Edwin Rowberry died on 20th September 1914 off the coast of Zanzibar, one of the early casualties amongst the millions of men who lost their lives in World War 1. It seemed sad for him to have died and all but these bare facts remembered, so I've tried to find out at least a little about his life before his untimely death aged just 27.

George born on 7th October 1886 in St Devereux parish in Herefordshire, the second son of William Arthur Rowberry and Emily Jones. His father William was a first cousin of my great grandfather Albert Edward Rowberry. By 1891 the family had moved to Christchurch on the outskirts of Newport, Monmouthshire, where William was working as a platelayer for the railways. By 1901, the family were back in Herefordshire in Kilpeck and George Edwin was already working, aged 14, as an errand boy. The 1911 census revealed that George was now in the Royal Navy and was a Leading Seaman, suggesting that he had been in the navy for some time.

Fortunately many Royal Navy Seamen's service records are now available online. A search revealed a very informative record for George. It shows that his Continuous Service Engagement began on the day of his 18th birthday in 1904, but it also states that he served 12 years. The record shows that he joined in June 1902 as a "Boy Second Class" but his service didn't count towards his C.S. Engagement until he was 18.

So George had already been in the navy for a few years when his mother gave him a present for his 19th birthday - a tiny book described as a "text-book for the weary". The little book is still in the family over 100 years later and thanks go to George's 3xgreat nephew Gareth for letting me use a photo of it. 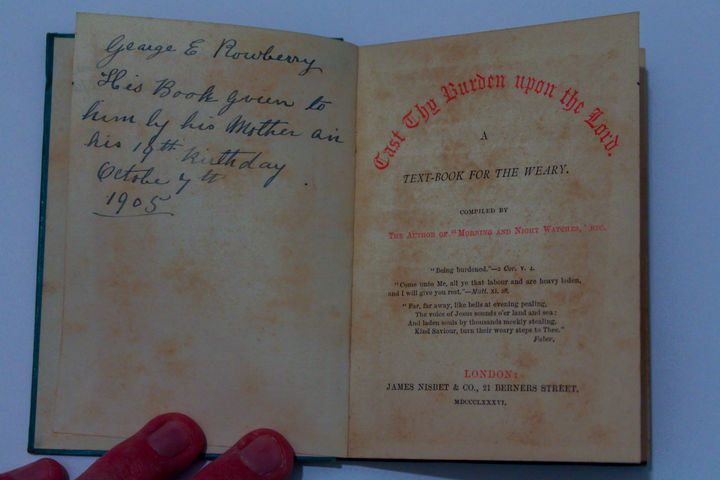 George did well in the Navy and his character was consistently described as Very Good. He progressed through the ranks from Boy 2nd Class to Boy 1st Class, to Ordinary Seaman, then Able Seaman, Leading Seaman and finally making it to Petty Officer. During this time he served his time on several battleships including HMS Defiance & HMS Impregnable, which were training ships, so it seems much of his naval career was probably spent in and around Devonport, Plymouth.

His final ship was the HMS Pegasus, a Royal Navy cruiser that was launched in 1897. He joined the ill-fated Pegasus in March 1913. The Pegasus spent the first weeks of WW1 off the East Coast of Africa, but on 19th September 1914 she headed into Zanzibar for repairs to her boilers & engines. The following day she was attacked by the German light cruiser SMS Königsberg. The Pegasus was unprepared and outgunned, although she did fire back, but was incapacitated within minutes. She sank later that day, with 38 sailors lost and 55 wounded. Sadly George Rowberry was one of those who died in the attack.

I think one of the most poignant things I've seen relating to WW1 is this little Christmas card that George sent to his parents in December 1913. It carries a photo of HMS Pegasus and a message of love to his parents and the wish that they "forget me not". For him to proudly send a photo of the ship that he ultimately died on, is so incredibly sad. Thanks to his 3xgreat nephew Gareth for the images.

George Rowberry, along with many of his fellow sailors, was laid to rest in the naval cemetery on Grave Island, Zanzibar. The Commonwealth War Graves Commission website confirms that he was a Petty Officer aboard the HMS Pegasus and that he was buried in the Zanzibar (Chapwani Grave Island) Cemetery. I can't reproduce the CWGC photo of the cemetery, but to see his page please click here. There is also a lady who blogs about cemeteries she has visited and she has a page for Chapwani's Grave Island. On the 3rd photo down the page, you can just see to the left of Able Seaman J. Smith's grave, the edge of George's gravestone. For the moment this is the closest I can find to a photo of his grave.

The sinking of HMS Pegasus was widely reported in the newspapers of the time and George is listed as a casualty in several of them. Although I haven't found a photo of George, I have at least found photos of the ships involved. The photo below show HMS Pegasus, the final ship for George Edwin Rowberry.

The two photos below show the German ship SMS Koenigsberg; the first is taken from the newspaper, the Daily Mirror, in 1914. (Image © Trinity Mirror. Image created courtesy of THE BRITISH LIBRARY BOARD. Image reproduced with kind permission of The British Newspaper Archive (www.britishnewspaperarchive.co.uk). Click www.britishnewspaperarchive.co.uk to see the full page from the newspaper. The second image comes courtesy of Kevin Patience who has researched the HMS Pegasus/Koenigsberg events extensively. 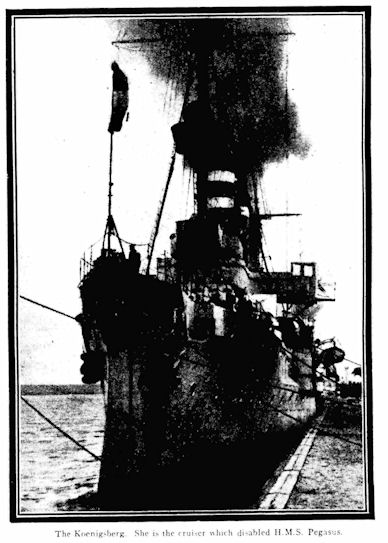 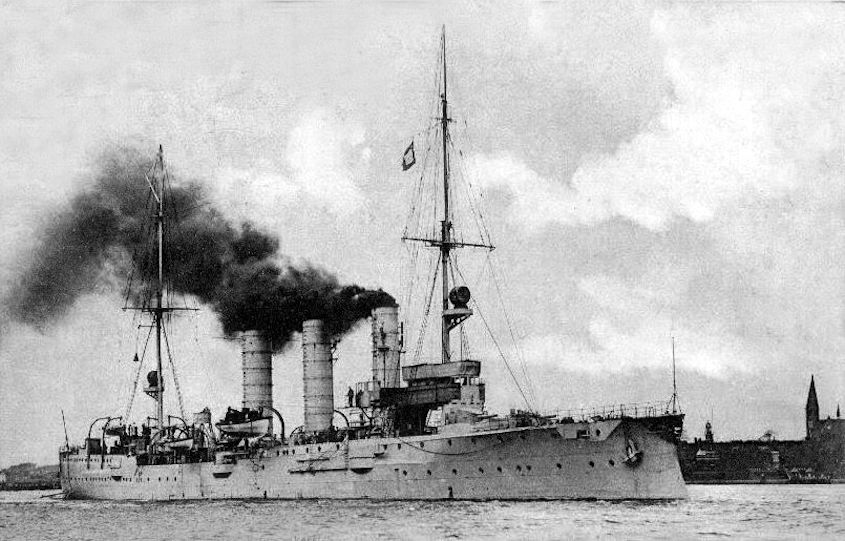 Many of the newspapers across the country carried articles about the sinking of the Pegasus and of course lists of the casualties. The best report I've found so far is this one from the Manchester Evening News on 22nd September 1914. (Image © Trinity Mirror. Image created courtesy of THE BRITISH LIBRARY BOARD. Image reproduced with kind permission of The British Newspaper Archive (www.britishnewspaperarchive.co.uk). Click www.britishnewspaperarchive.co.uk to see the full page from the newspaper.

George's death was of course also reported in the local Monmouth newspapers. He was the first Monmouth sailor to die in the war. The report below is from the Monmouthshire Beacon from September 1914. It is particularly interesting in that it mentions that he was a keen rugby player - an aspect of his life that wouldn't show up in any of the official records. It also provides another avenue of research in the hunt for a photo of George - perhaps a rugby team photo may still exist somewhere? 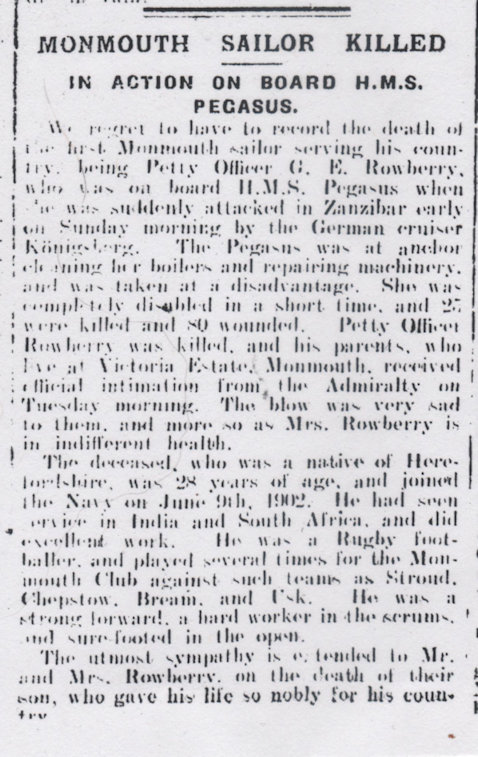 Like most soldiers and sailors who died in WW1 George Rowberry is remembered back home on his local War Memorial. In George's case he seems to be commemorated on two! He appears on the Monmouth memorial, as might be expected as that's where his parents were living at the time. The photo below shows a close up of the WW1 plaque - Photo credit: Peter Garwood, Monmouth. 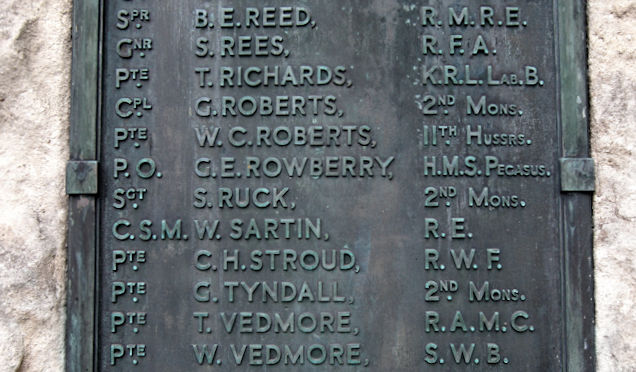 However he also seems to be listed on the Abergavenny War Memorial, which is a white marble plaque on the wall in the entrance to the town's market hall. This memorial splits the men into those from the town and those from the rural area, George is listed in the latter category. 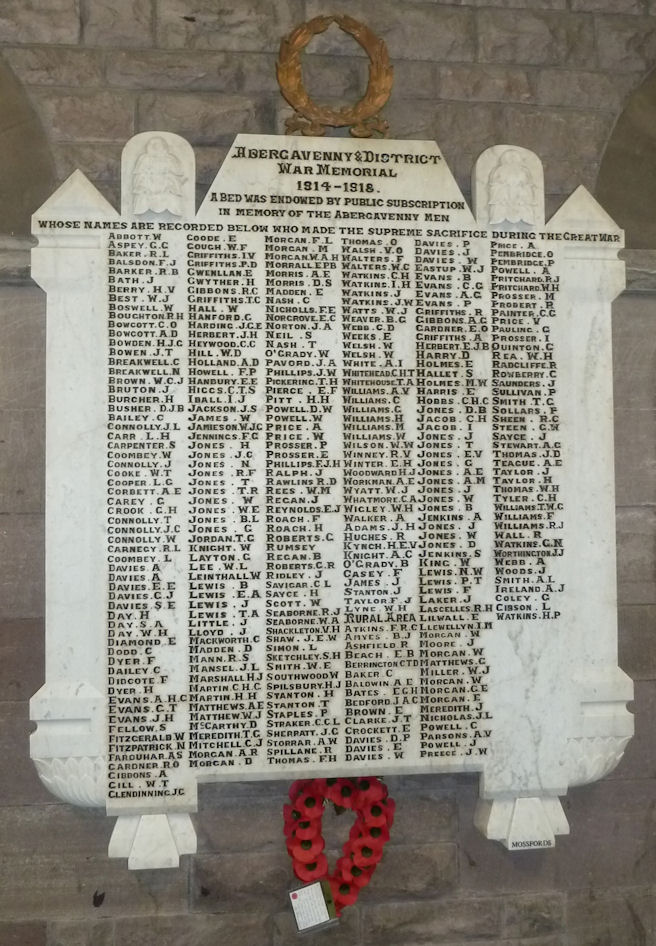 George's parents had already lost two children as infants and had erected a gravestone in their memory. When George died his details were added to the stone with those of his little brothers. Many thanks again to Kevin Patience for this image of the gravestone. 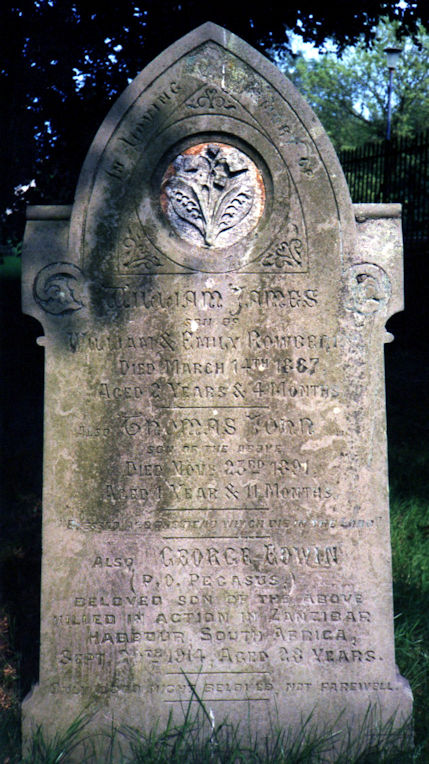 George was entitled to three medals. The 1914-15 Star which was awarded to members of the British forces who served between August 1914 and December 1915. The second was the British War Medal which was awarded to all those who had served overseas. The third medal was the Victory Medal which was given to all those who had received the other 2 medals. George's name is engraved either on the back or on the edges of the medals. Remarkably the medals are still owned by the family and again I am very grateful to Gareth for letting me use these photos. 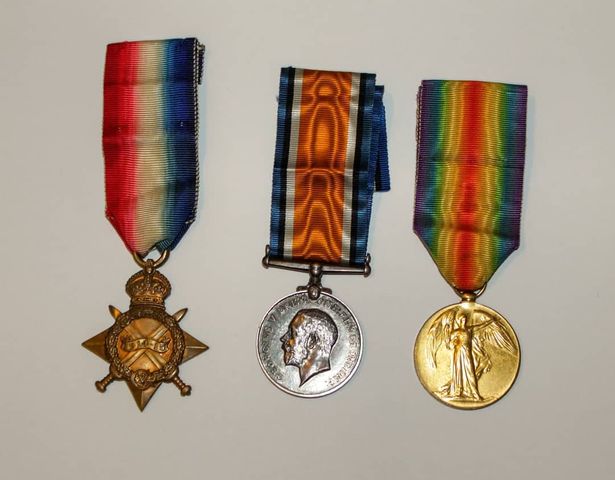 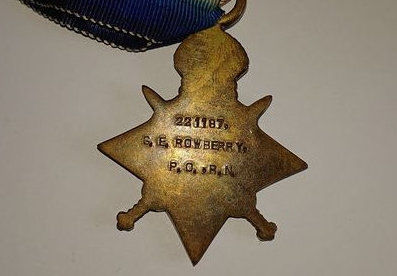 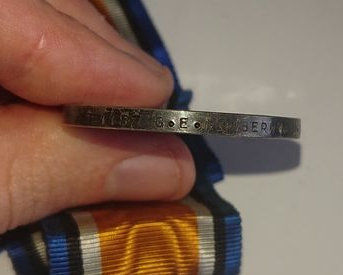 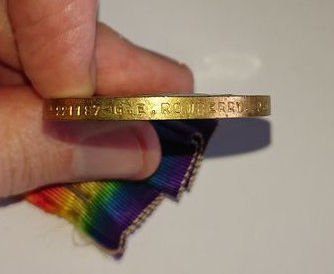 In 2014 The Tower of London started a nightly ceremony whereby members of the public could nominate someone who died in WW1 to have their name read out. The names were read out from the Tower Moat which was filled with 888246 ceramic poppies, one for every serviceman who died in the War. George Rowberry's name was read out on 19th September 2014, just one day short of the 100 years since he died. You can read the lists of names read out each night on the Tower of London website here

Although unfortunately I haven't found a photo of George yet, we do have a bit of a description of him from his service record. George was said to be 5 feet 6 inches tall when he was 18, with brown hair, brown eyes and a fresh complexion. He had a couple of scars apparently, one on his left shoulder and one on his left buttock! Although no photo of George has been found yet, we do have this lovely photo of his younger brother Robert Alfred Rowberry who also served in WW1, so perhaps we can get a bit of an idea of what George might have looked like. Robert is in the centre of the photo. Again thanks to Gareth for the image. 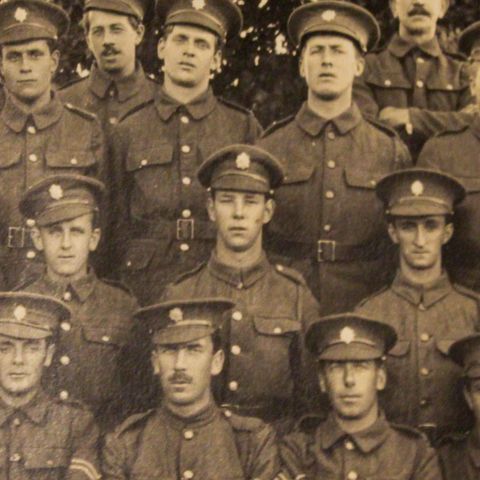 It would be lovely though to complete George's story by finding a photo of him, so if anyone has one, please do get in touch. n.rowberry@btinternet.com

In researching George's final days, several sites have been invaluable, so I've included links to some of them here.