This page is dedicated to the memory of James Francis Alexander Lowth who died on 22nd September 1914 when the HMS Aboukir was sunk in the North Sea.

James Francis Alexander (Frank) Lowth died on 22nd September 1914 in the North Sea when the ship he was on was torpedoed by a German submarine. He was sadly one of the early casualties amongst the millions of men who lost their lives in World War 1. It seemed sad for him to have died and all but these bare facts remembered, so I've tried to find out at least a little about his life before his untimely death aged just 33.

James was born on 29th May 1881 in Carlton Scroop, Lincolnshire, the third of six sons to William Lowth and Julia Magners (or Magness). His father William Lowth had been a professional soldier in the Cheshire Regiment and had met and married Frank's mother Julia when serving in Ireland in 1873. By 1891 William had retired from the army and the family, including 9 year old Frank, had settled in Carlton Scroop, Lincolnshire. In 1901, the family were still in Carlton Scroop and by now Frank was 19 and working as an ironstone labourer. Sadly just a couple of years later, Frank's father William Lowth was killed when he fell off a cart and was run over. His son was travelling with him at the time and witnessed the accident. The clipping below shows part of the article in the Grantham Journal from 25th July 1903. (Image © THE BRITISH LIBRARY BOARD. ALL RIGHTS RESERVED. Image reproduced with kind permission of The British Newspaper Archive (www.britishnewspaperarchive.co.uk). Click www.britishnewspaperarchive.co.uk to see the full page from the newspaper. 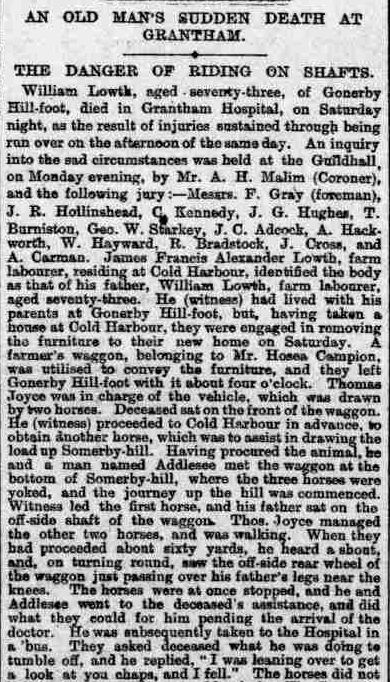 The following year Frank Lowth enlisted and became a Private in the Royal Marine Light Infantry. These Royal Marines were the land fighting element of the Royal Navy. Frank served with the Marines for the rest of his life. In 1907 he was promoted to Corporal Lowth. In the 1911 census he was stationed at the Royal Marine Depot in Walmer, Kent.

Fortunately many Royal Navy service records are now available online. A search revealed a very informative record for Frank. It shows that his character was generally considered "Very Good" and his Ability was graded either "Very Good" or latterly "Superior" which is nice to read. There are little details, like the fact that they tested whether he could swim, which fortunately he could (not all those in the Navy could in those days). It also of course lists all the ships he served on.

He was initially stationed at the recruit depot at Deal in Kent and then at Chatham Dockyard. His first ship was the HMS Adventure in 1906 and from then on his career consisted of periods onboard different ships, interspersed with spells at Chatham Dockyards. His final ship was of course HMS Aboukir, on which he embarked on 2nd August 1914.

HMS Aboukir was an armoured cruiser, built around 1900. She had been partially decommissioned in 1912, but with the start of WW1, she was recommissioned as part of 7th Cruiser Squadron. The squadron was given the job of patrolling the North Sea to help protect the English Channel. As Frank embarked on the Aboukir at the beginning of August 1914, he must have been on her when she was held in reserve for the Battle of Heligoland Bight later that month. On the 22nd September the Aboukir was patrolling near Ostend, with 2 of her sister ships, HMS Cressy and HMS Hogue. Early in the morning HMS Aboukir was torpedoed by a German submarine U-9. Initially the British Captain thought he'd hit a mine, so asked for the other 2 ships to come in close to help survivors. Only then did they realise it had been a submarine attack, but by then it was too late and first the Hogue and then the Cressy were torpedoed too. All three British ships were lost. Sadly James Francis Alexander Lowth was one of the 1,397 enlisted men who died that day.

Frank Lowth's body was never recovered, so there is no cemetery for him. Instead he is commemorated on the Chatham Naval Memorial. The Commonwealth War Graves Commission website confirms that he was a Corporal in the Royal Marine Light Infantry aboard the HMS Aboukir. I can't reproduce the CWGC photo of the cemetery, but to see his page please click here

The sinking of the Aboukir, Cressy & Hogue was widely reported in the newspapers of the time. Because so many of the bodies were never recovered, this made the job of accurately listing the casualties a difficult one. So initially a lot of the lists in the newspapers were the details of those men lucky enough to have been rescued. By the beginning of October though, it could be assumed that anyone not reported as rescued had perished and newspapers carried lists of men with the explanation that "in the absence of any evidence to the contrary it is feared they must be regarded as having lost their lives". Frank was listed as Lowth, J.F.A., R.M.L.I CH14721. None of the old newspapers online so far carry a photo of him, but I did find this article from the Grantham Journal, his local newspaper, reporting his loss. (Image © Johnston Press plc. Image created courtesy of THE BRITISH LIBRARY BOARD. Image reproduced with kind permission of The British Newspaper Archive (www.britishnewspaperarchive.co.uk). Click www.britishnewspaperarchive.co.uk to see the full page from the newspaper. 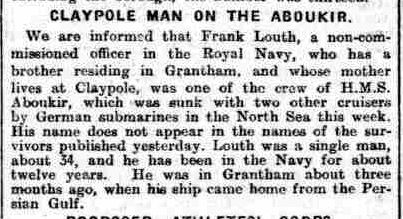 Frank Lowth's widowed mother Julia, having lost one son within the first few months, then had to suffer the remainder of the war knowing that her remaining 5 sons were also fighting. The image below shows a small article in the Grantham Journal from April 1916, describing Julia Lowth's pride in her 6 sons who served in WW1. (Image © Johnston Press plc. Image created courtesy of THE BRITISH LIBRARY BOARD. Image reproduced with kind permission of The British Newspaper Archive (www.britishnewspaperarchive.co.uk). Click www.britishnewspaperarchive.co.uk to see the full page from the newspaper. 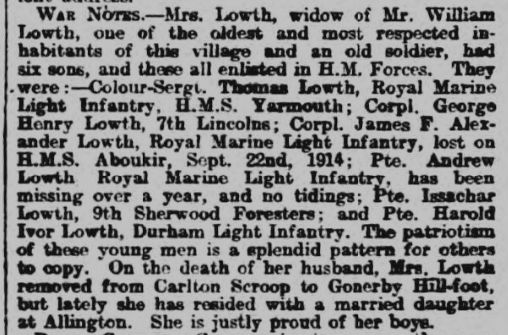 In the end, of Julia's 6 boys it is likely that only 4 survived the war; the eldest, Thomas Lowth, who also served in the Royal Marine Light Infantry, George Henry Lowth who served with the Lincolnshire Regiment and Issachar Lowth who served with the Sherwood Foresters. Although Andrew Lowth, who was also serving with the Royal Marine Light Infantry, is said to be missing in the above article, I've not found a report of his death, so I hope that means he survived too. The youngest son Harold Ivus Lowth won the Military Medal in 1917, but sadly died of wounds just a few months later. You can read Harold's story here.

Although unfortunately I haven't found a photo of Frank yet, we do have a bit of a description of him from his service record. He was said to be 5 feet 6 and half inches tall, with dark brown hair, hazel eyes and a fresh complexion. It would be much nicer though to complete Frank's story by finding a photo of him, so if anyone has one, please do get in touch. n.rowberry@btinternet.com

In researching Frank's final days, several sites have been invaluable, so I've included links to some of them here.