This page is dedicated to the memory of Charles Adam Thorburn who died on 4th January 1919 in Germany.

Charles Adam Thorburn was born in 1889 in Blantyre, Scotland and he died on 4th January 1919 in Germany, one of the many millions of men who lost their lives in World War 1. It seemed sad for him to have died and all but these bare facts remembered, so I've tried to find out at least a little about his life until his untimely death aged just 29.

Charles Adam Thorburn was born on 28th July 1889 at Greenhall Lodge, Blantyre - the 9th of 12 children of William Thorburn and his wife Amelia Moncur. William Thorburn was a joiner, born on Mull, who had moved to Blantyre via Longforgan in Perthshire. He must have met Amelia Moncur in Longforgan as he married her there in 1877. The 1891 census shows William & Amelia with their six surviving children at that point (including Charles), living in Greenhall Lodge, Blantyre, with William described as a Foreman Joiner.

By 1901 the family had moved again to Hillside Cottage, Blantyre. Charles was still at school as were most of the younger children. His father William was now described as a Building Inspector, which sounds as if it was a step up from being a joiner. Most of the surviving children were still living at home with their parents, so it must have been a full house. By 1911 the family had moved to the Zambesi Road area of Blantyre; six of the children still living at home, including Charles. All the children (even the youngest, John aged 15) were now working at least. Charles Adam Thorburn was employed as a law clerk.

It seems Charles (and at least some of his brothers) were keen cricketers. Their names appear in the scores for Blantyre Cricket Club in the pre WW1 years. Charles was the Captain of the Cricket Club in 1910, although he missed a lot of the season due to illness. In 1911 he was club secretary - perhaps his skills as a clerk were put to use as the club secretary? Here's one example from the Scottish Referee paper of 1911. Image created courtesy of THE BRITISH LIBRARY BOARD. Image reproduced with kind permission of The British Newspaper Archive (www.britishnewspaperarchive.co.uk). 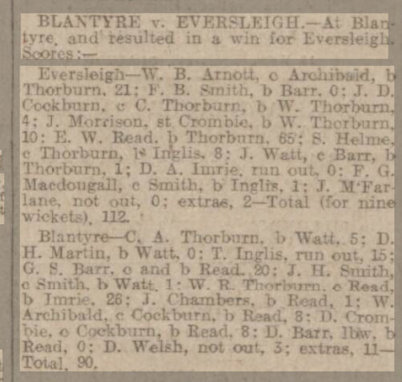 So that's all I've been able to find out about Charles' early life. Not much to go on. War broke out in 1914 and Charles enlisted in December 1917. He had been working as a law clerk, but by 1917 he was described as a cashier. The Commonwealth War Graves Commission website revealed that he was a Gunner in the 24th Siege Bty, 21st Brigade, Royal Garrison Artillery, his service number was 190319 and that he was buried in the Cologne Southern Cemetery Memorial in Germany. I can't reproduce the CWGC photo of the cemetery, but to see his page please click here

You can now look at the Medal Roll cards from the first world war online. These show a soldier's name, rank and what medals they were entitled to. Due to copyright issues, I don't think I can reproduce the image of the medal card, so instead I've transcribed it.


As is so often the case with these medal cards, not all of the information has been filled in, but it does indicate that he would have been entitled to two medals. The British Medal was awarded to servicemen who served in a theatre of war between 5th August 1914 and 11th November 1918. The Victory Medal (Allied Victory Medal) was awarded for service in any operational theatre over the same time frame.

Luckily Charles' army service records have survived (over half the WW1 service records were destroyed by a bombing raid in WW2). The service records give a wealth of information that can be found nowhere else. They show that at the time he enlisted, he was working as a cashier and still living at his parents' house in Blantyre. The service records also give some basic facts about Charles - he was 5 foot 10˝ tall, weighed 134 lbs, with a 35 inch chest, very fair hair, a ruddy complexion and grey eyes.

The records show that he joined up in December 1917, he wasn't actually posted to France until March 1918. Some of the details of his service are too faded or damaged to read, but it looks like he suffered from a gas shell attack in July 1918 and was hospitalised in France. He rejoined his unit just 2 months later in September. Whether this gas attack weakened his lungs, it is impossible to tell, but he died of bronchial-pneumonia on 4th January 1919 at a casualty clearing station in France. He had survived the war itself, but succumbed to illness a couple of months later before he could get back home. Charles Adam Thorburn was buried in the Cologne Southern Cemetery in Germany.

It seems his mother must have been informed he was dangerously ill and had asked to visit him, but permission was denied. The army sent his personal effects back to his mother and they are listed in the records. They included: photos, pipe, knife, pouch, card case, religious emblem, cigarette case, souvenir notes. Probably a fairly typical collection of items for any WW1 soldier. The photos were probably family ones, but perhaps there might have been a sweetheart? He died unmarried, so we will probably never know.

Although you can now look at many of the WW1 War Diaries online, I have yet to find the relevant one for Charles' brigade, which is a shame as the War Diary might have given more of an insight into his last months. If anyone can point me in the right direction for the relevant war diary, I'd be very grateful.

I've yet to find a newspaper report of Charles' death, probably because the relevant papers aren't available online yet. Charles Adam Thorburn had 6 brothers who survived to adulthood and all 7 of them served in the army during the war. Five survived, but Thomas Rankin Thorburn died in Cairo. Many years later, in 1930, another brother James Thorburn died in Bruges. The newspaper report of his death mentions his brothers, including the fact that Thomas and Charles were killed in action.

Charles is buried at the Cologne Southern Cemetery in Germany. He is also commemorated back home on the Blantyre War Memorial and in the parish church (both along with his brother Thomas). If anyone can let me have photos of either memorial to add here, I would love to hear from them.

The final piece of documentation I could find for Charles Adam Thorburn was his entry in the Army Register of Soldiers' Effects. It lists the amount of money in his account at the time of his death and the amount, including the War Gratuity, that was eventually paid to his next of kin - in this case to his mother Amelia Thorburn. For Charles the total amount came to only Ł11.0s.1d - not much to show for the ultimate sacrifice.

So that's all I've managed to find about the life of Charles Adam Thorburn. If anyone can add to it, I would love to hear from them. What I would most like to find is a photograph of Charles - if anyone has one, please feel free to E-mail me.

In researching Charles' final days, several sites have been invaluable, so I've included links to some of them here.