This page is dedicated to the memory of William Johnston who died on 17th August 1916 in France. 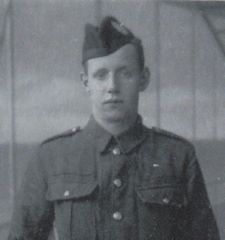 William Johnston was born on 14th March 1895 in Kilcalmonell, Argyll, Scotland; the youngest of 9 children of John Johnstone/Johnston and his wife Mary Jenkins. He died on 17th August 1916 in France, one of the many millions of men who lost their lives in World War 1. It seemed sad for him to have died and all but these bare facts remembered, so I've tried to find out at least a little about his life until his untimely death aged just 21.

William's father John was the brother of my great great grandfather also William Johnstone. John had moved over to Argyllshire by 1871 and was living with his uncle (yet another William Johnstone). He met Mary Jenkins and they were married in 1878 and settled in Kilcalmonell, where John worked as a drain contractor for the rest of his life. Together John & Mary had 9 children between 1880 and 1895 - William Johnstone being the youngest. Sadly John died in 1901 having suffered from pneumonia for 2 weeks, when William was only 6. After her husband's death, Mary took the family to live in Glasgow. In 1911 Mary and 4 of the children were living in Dennistoun and young William was working as a clerk at a wholesalers. The photos below show William's parents John & Mary.

The Commonwealth War Graves Commission website revealed that he was a Lance Corporal in the 7th Battalion of the Cameron Highlanders and that his service number was S/16889 and that he is commemorated at the Thiepval Memorial in France. I can't reproduce the CWGC photo of the cemetery, but to see his page please click here

The photo below shows William in his uniform and was taken in Glasgow, perhaps when he enlisted. 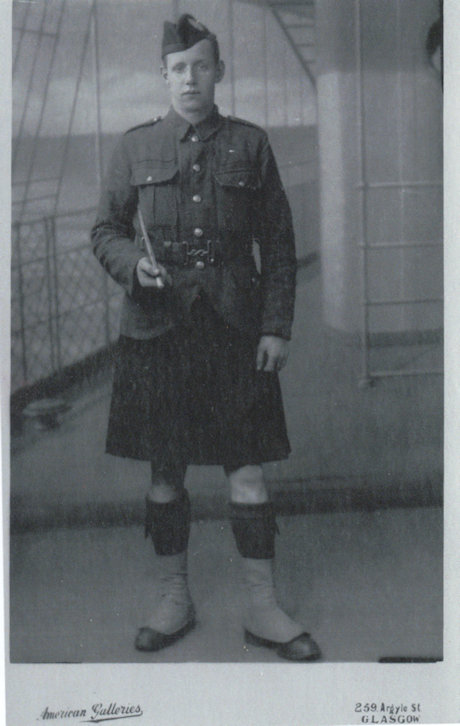 William's service records don't seem to have survived, but he would have been 19 when the war began, so it's possible he was one of the early recruits. The fact that when he died he was a Lance Corporal - one rank up from the Private he almost certainly joined up as, suggests that by 1916 he'd been in the army some time at least. His medal roll index card indicates that he first went to France in August 1915. The medal rolls show a soldier's name, rank and what medals they were entitled to. Due to copyright issues, I don't think I can reproduce the image of the medal card, so instead I've transcribed it:

In the absence of any detailed information of William's service history, I looked at the War Diaries for the Cameron Highlanders (these are now available to download online). War Diaries were kept as a daily record of operations, intelligence reports and anything else that was going on for a given battalion. I've transcribed the relevant war diary for the day of William's death below. I've also transcribed the day before just to give a bit more detail of the build up to the day he died. Prior to the attack at Martinpuich below, the 7th battalion had been in the Albert area and then working as digging parties at Peake Wood in the Bazentin-le-Petit area. There is an appendix in the war diary which gives much more detail of the day's events - I hope to transcribe that soon too.

So William's battalion were in the thick of it at the Somme - one of the bloodiest battles in history. The loss of life was phenomenal. On the day William died, 17th August alone - 644 British & Commonwealth men died in France - mainly at the Somme. The figures from the War Diary above suggest 58 men including officers of the 7th Battalion Cameron Highlanders died that day alone, with many more injured or missing. I did a search of the Commonwealth War Grave website and found the names of 59 men of the 7th battalion recorded as dying on the 17th, so presumably one additional soldier was found to have died that day after the war diaries were written. In the confusion of war with so many men missing and wounded, it must have been near impossible to keep track. There is a full list of the men of the 7th Cameron Highlanders who died at the Somme on this Roll of Honour

Initially it seems that William was reported as missing rather than killed. The report below is taken from the Scotsman newspaper over a month after he'd actually died. Image © Johnston Press plc. Image created courtesy of THE BRITISH LIBRARY BOARD. Image reproduced with kind permission of The British Newspaper Archive (www.britishnewspaperarchive.co.uk). I've yet to find any newspaper reports that confirmed his death - how long did his poor family cling to the hope that he was still alive? 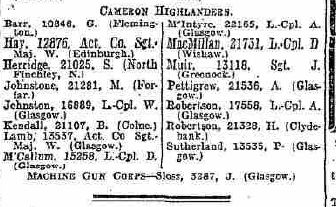 The final documentation of William's life is the Army Register of Soldier's Effects. These registers show what monies were owing to the soldier at the time of his death - in the case of William it amounted to Ł2.6s.0d, plus the War Gratuity of Ł7. His account was balanced in September 1917, so he must have been declared dead by that time. This money was allocated to his mother Mary. By any standard it doesn't seem much for her son's life.

William is remembered on the Thiepval Memorial in France. Thiepval is the Memorial to the Missing of the Somme - some 72000 men who have no known grave. Thanks to the kindness of Jim Baldwin, we now have this photo of William's name on the Thiepval memorial.