When clearing out our parents' house, my sister and I came across our Mum's wedding dress. As luck would have it, a lovely local shop, Clifton Hill Textiles, was putting on a wedding dress exhibition and talk and kindly included Mum's dress in the collection. Here are a couple of photos from the exhibition, one of Mum's dress and one to show it in the context of the exhibition. And below that of course Mum & Dad on their wedding day in 1963. 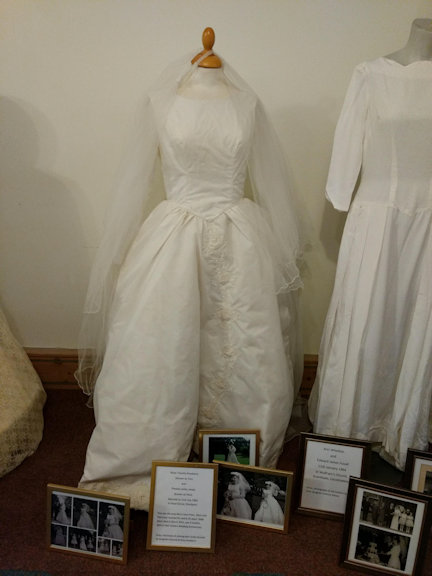 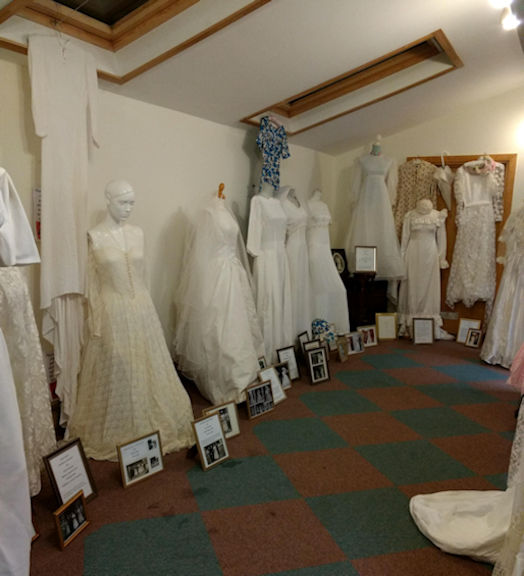 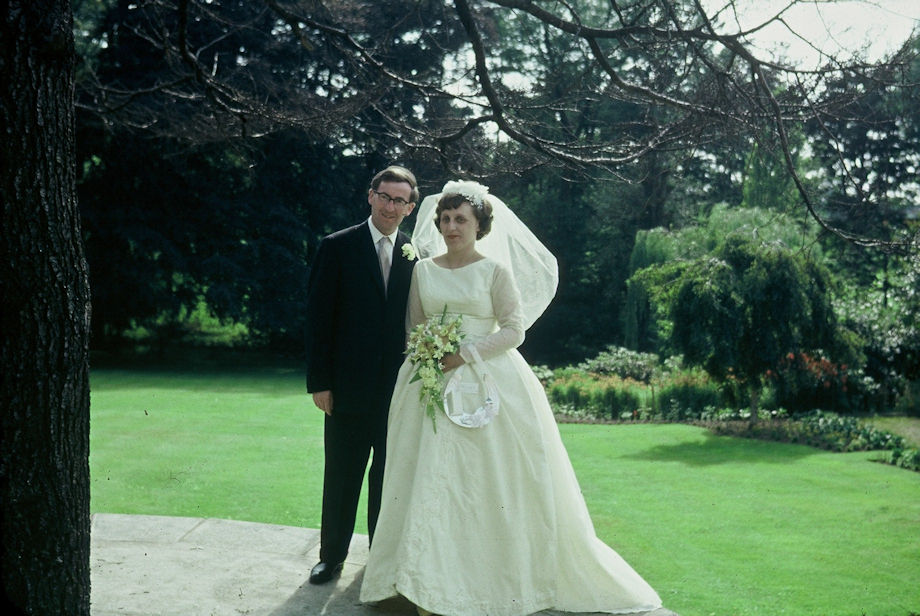 Over the years I've gathered quite a few photos of brides and grooms and/or wedding parties and had often thought it would be nice to collate them onto one page. So inspired by the above exhibition, here it is.

The earliest record of a wedding I have is that of Richard Rowberry and Izott Smyth in 1575 in Thornbury, Herefordshire. Obviously I'm not going to be able to rustle up a photo of that wedding day, the best I can do is the entry from the parish marriage register. They were probably not particularly well off, so chances are Izott wore her best (and possibly only) dress for the occasion.

Although I have information of lots of weddings between then and the 19th century, there is not much to show visually for obvious reasons. The next item I could think to show a photo of is a wedding ring given in 1866 when John Steele married Grace Taylor McKersie Johnstone and inscribed with their initials. For many years I thought this ring was inscribed JF to GTMJ as these were the initials of my great grandparents (John Fraser and another Grace Taylor McKersie Johnstone). It was only when I read the will of the first Grace, in which she left her ring to her niece and namesake in 1901 that I realised my mistake. So the ring has passed through 5 generations of women in our family to end up with me. 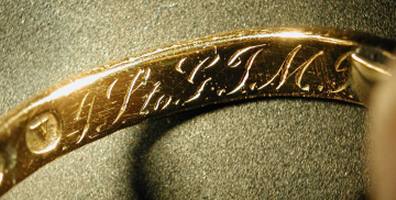 The earliest wedding portrait I have is this one of Norah Rowberry and John Henry Allan. They married in 1891 in Canada and was kindly sent to me by their granddaughter Lin. Nora had been sent to Canada in 1886, aged just 16 after her parents both died. She was one of the Dr Barnado's child migrants sent over to Canada for a better life. As an orphan with no family around her, she wouldn't have been able to afford a fancy wedding dress, so married in probably her best dress instead. 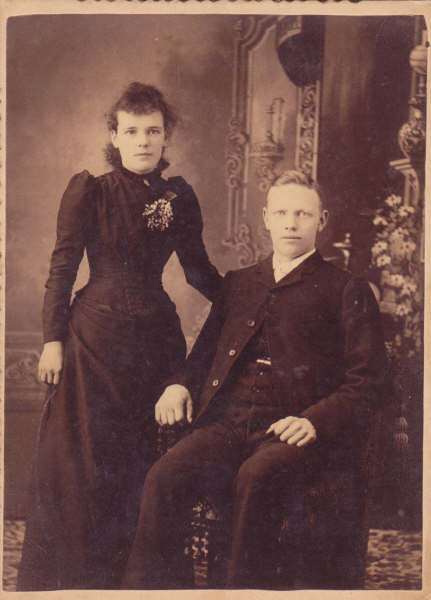 The next earliest definite wedding photo I've got so far is this lovely one from 1908. Bathia Cooper & Archibald Ferguson married in 1908 in Australia and the photo was kindly given to me by their granddaughter Lynette. Bathia had been born in Scotland but must have emigrated to Australia sometime in the early 1900s. Bathia's wedding dress looks white or at least a very pale colour and she has a lovely bouquet of flowers. 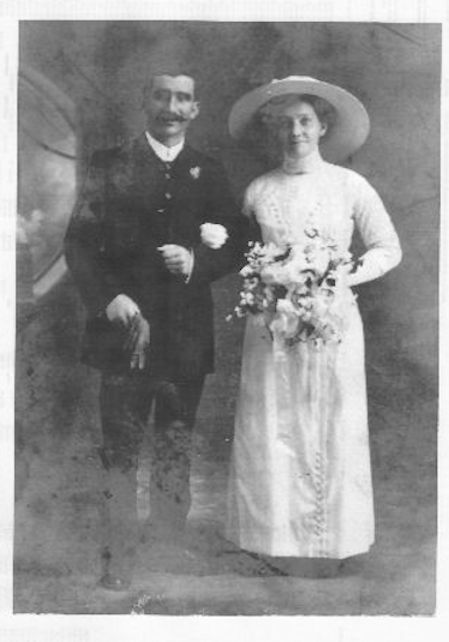 The next wedding photo dates from 1912 and shows Rose Rock and Arthur Powell who married in Herefordshire. I hope they were happier about the wedding than they look in the photo! Arthur was clearly a sailor, so they must have married when he was home on leave. The second picture shows more of the wedding party, including more sailors - perhaps brothers or just crew mates? 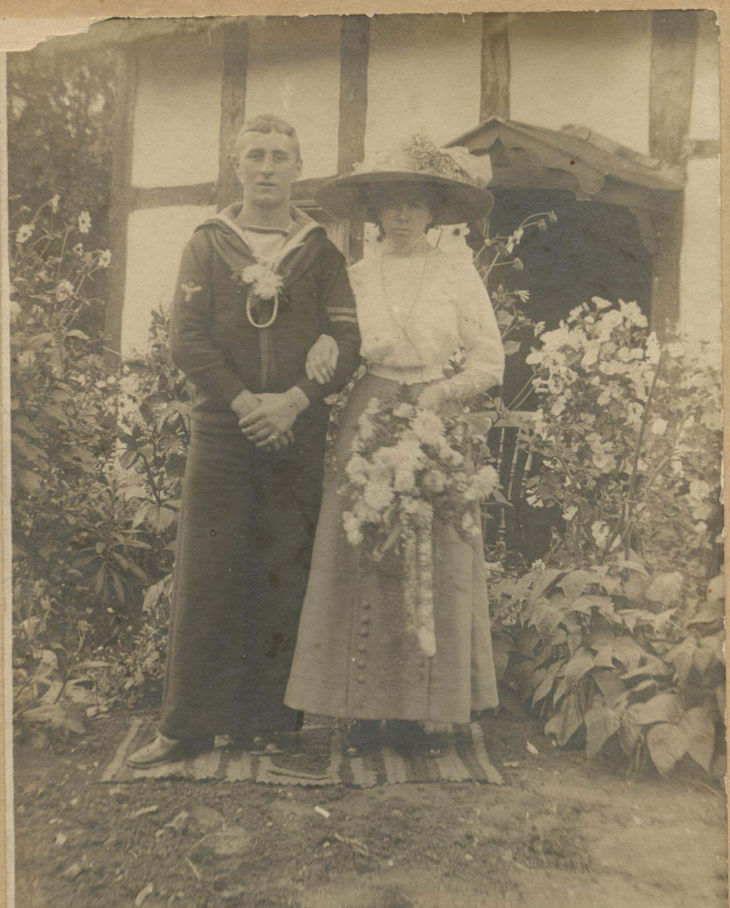 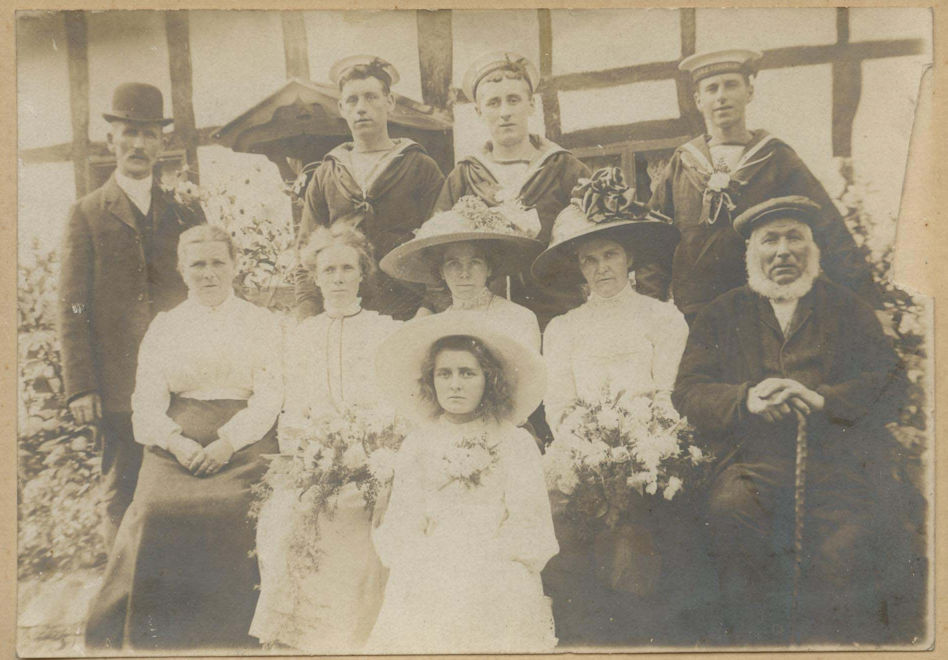 This lovely one is from 1913. It is of Thomas Fraser and Elizabeth Carrodus who married in New Zealand and was kindly given to me by their grandson Tony. The style of the dress may be different, but many of the elements of modern weddings are there - white dress, floral bouquet and veil. 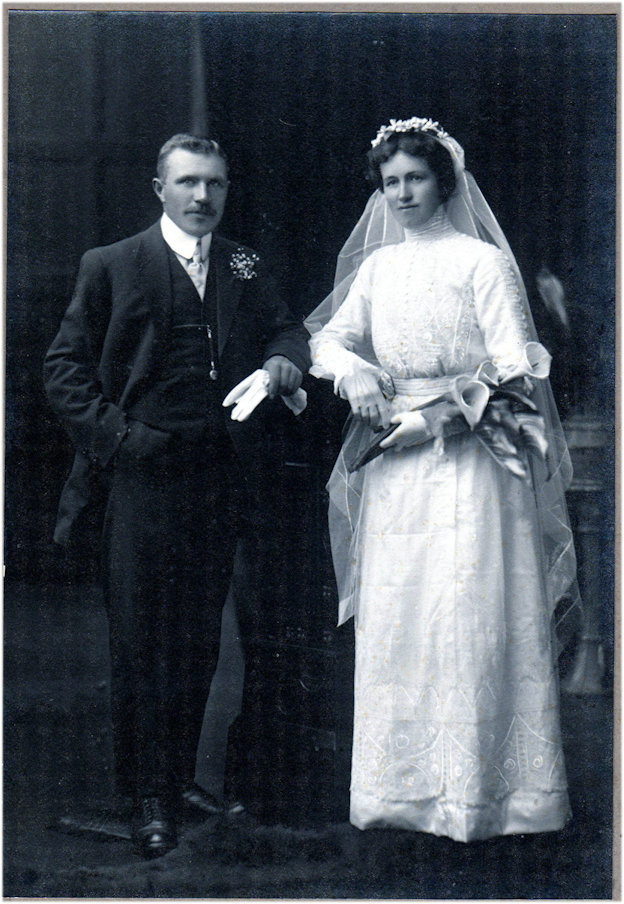 The next wedding picture dates from just after the First World War. Lilian Brookes married Charles Williams in 1919 in Hereford and the photo was kindly given to me by their grandson Leslie. This wedding is only 6 years after the previous one, but the wedding outfit has changed - Lilian is daringly showing her ankles! For this wedding it's nice that we also have a photo of the wedding party, with both sets of parents (including my great grandparents James & Harriet Brookes), bridesmaids and best man. 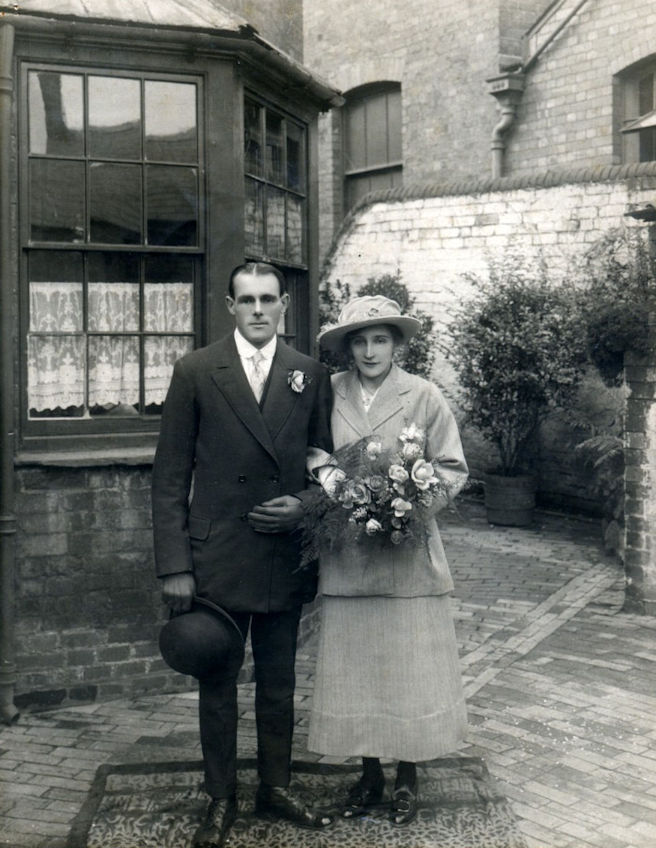 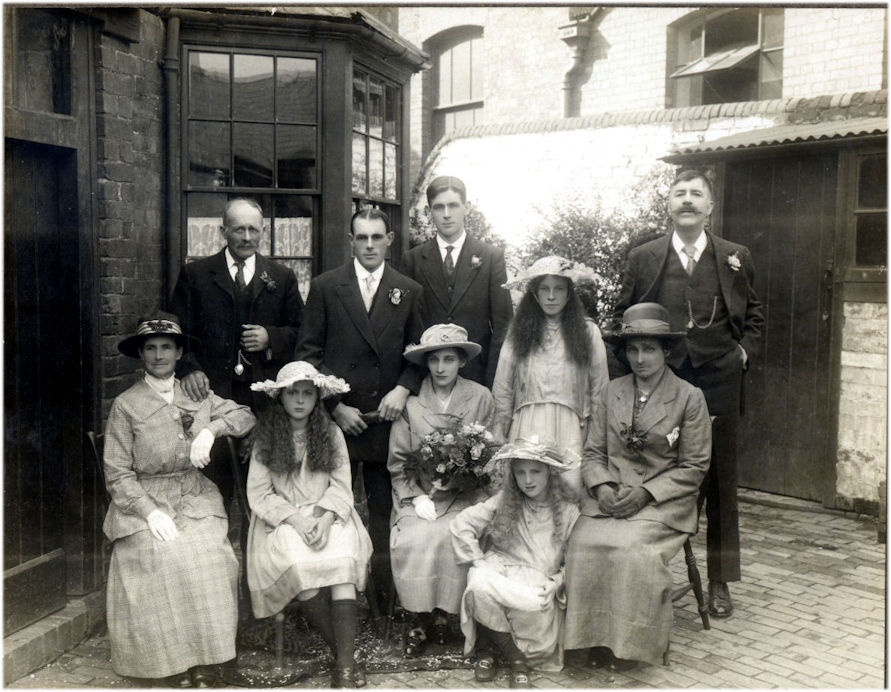 The next photo is from just a year later, but the hemline seems to have raised just a little bit more. This is the wedding of Charles James and Gertrude Sheppard in Nottinghamshire in 1920. Gertrude's dress has much more of a 1920s feel to it than the previous photo. Her dress also looks quite lacy - possibly because the wedding was in the lace-making stronghold of Nottinghamshire. 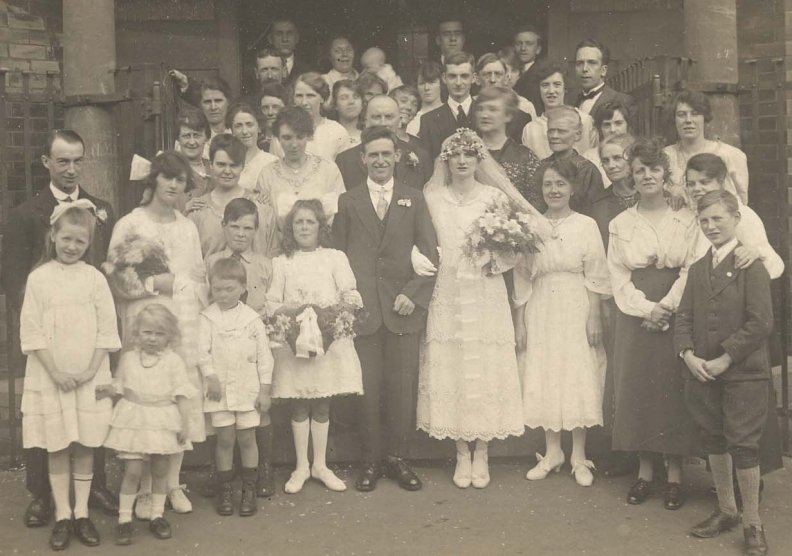 By 1925 when Valentine Stone married Harry Mears in Cardiff, her dress looks positively flapper-like; much shorter than the previous ones. Valentine owed her delightful name to being born on Valentine's day! 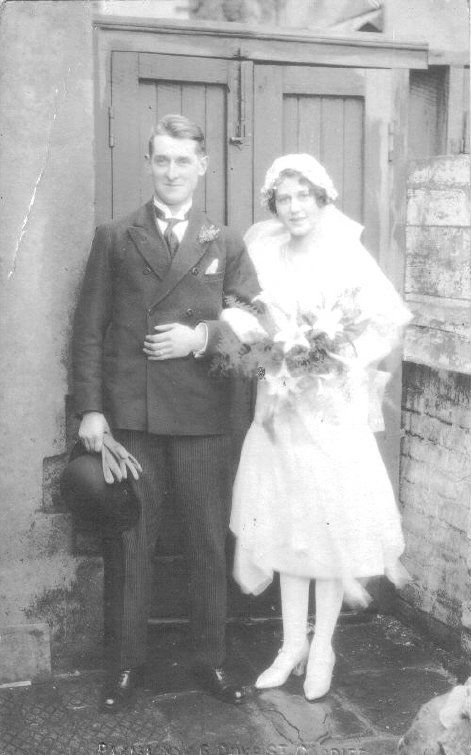 When my grandparents (Dorothy Fraser and Leslie James) married in Stockport in 1931, both bride and groom were quite fashionably dressed. She wore a long white (possibly cream) dress with even longer veil. He wore a suit with gloves and spats! 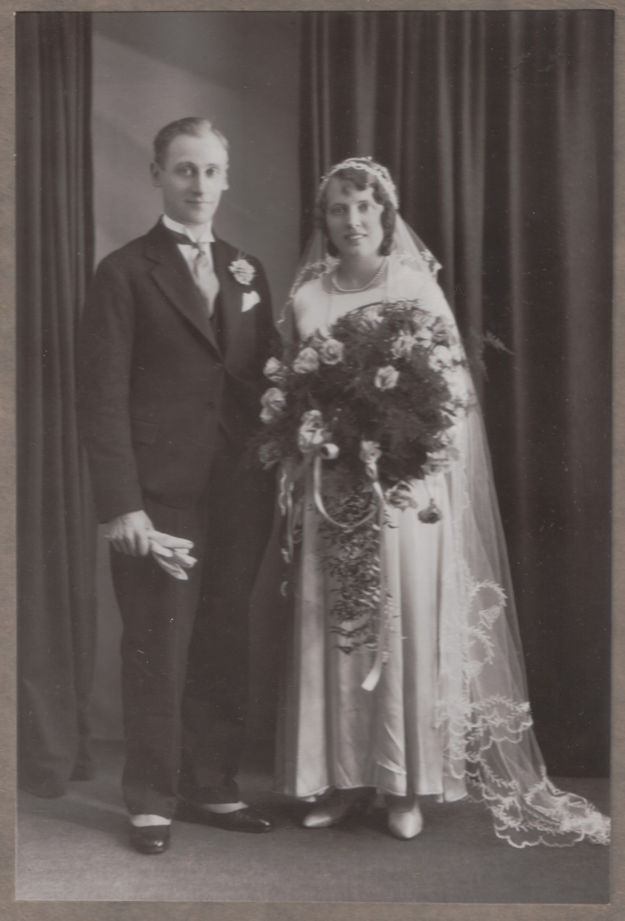 The bride's dress in the next photo looks quite unusual, but rather lovely. It was apparently a cream dress with multicoloured sections on bodice and sleeves. This is Doris Pritchard & Lionel Williams who married in 1935 in Newport, Monmouthshire. 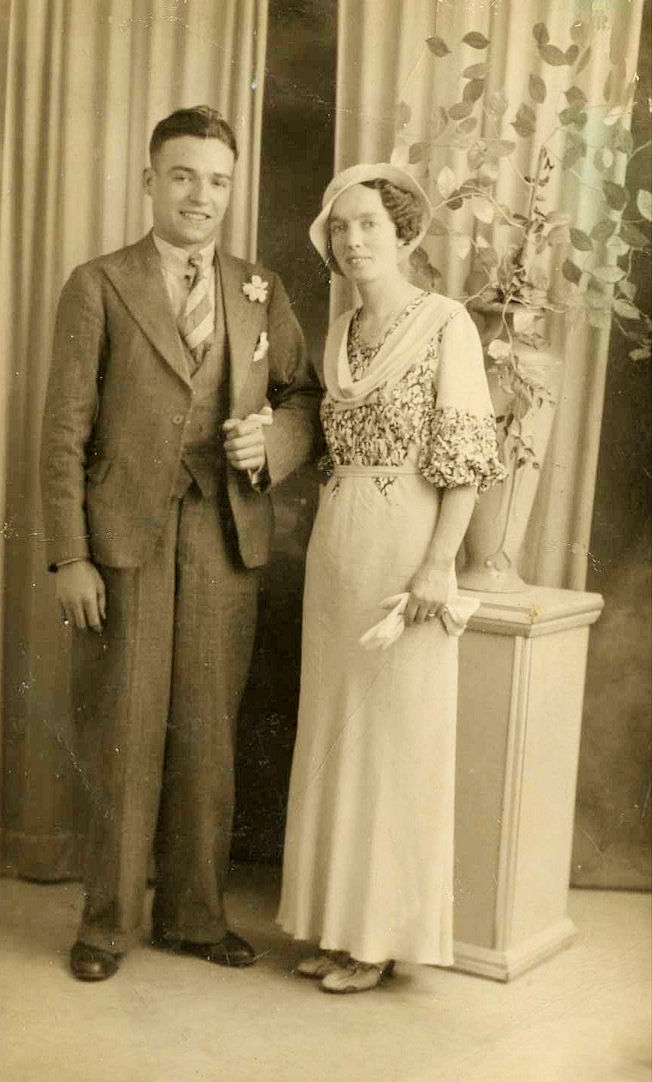 My great aunt Connie Brookes married Harry Williams in 1937 in Hereford. She chose a long elegant dress with veil attached by a tiara type affair. From the talk given at the wedding exhibition that inspired this page, we learnt that a lot of 1930s brides were inspired by Hollywood glamour and I'd say this and the next dress probably fit this idea. 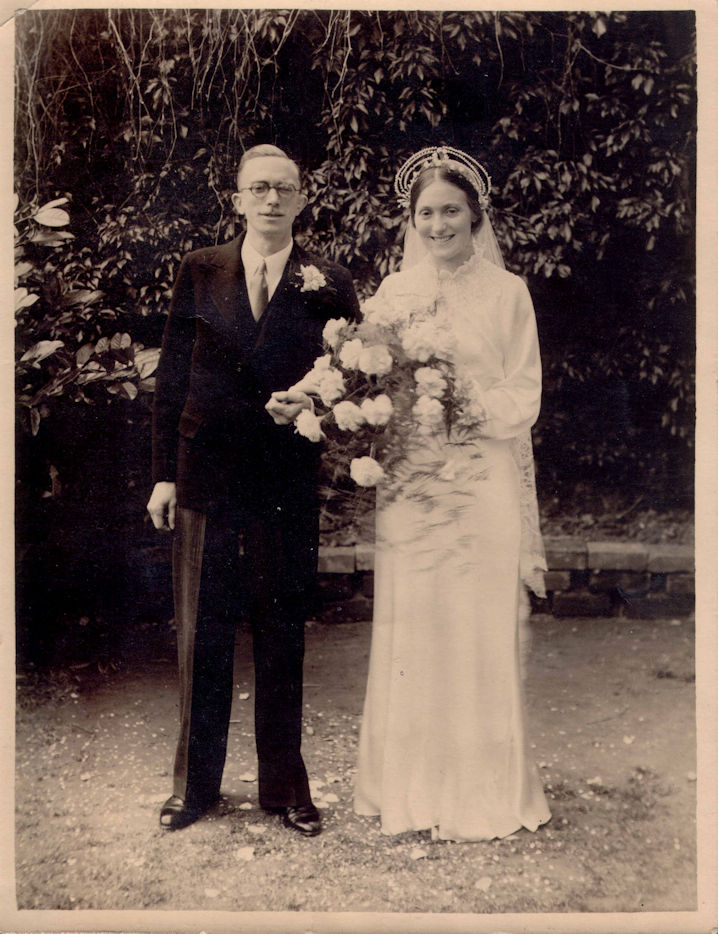 Great aunt Irene James married James Rushton in Stockport in 1937. The photo below actually seems to show Irene on the arm of her brother Leslie (my grandfather) so was perhaps taken just before she took the wedding vows. The little girl in front is my Mum, Pamela James. 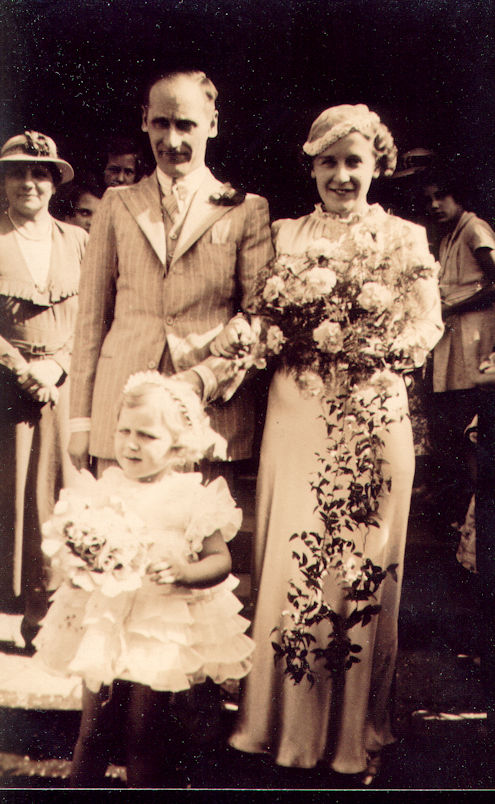 Great aunt Grace Fraser married Jim Burdett in 1940 in Stockport. It was of course war time, so no fancy wedding dress for Grace. They had a simple wedding reception at the local cinema cafe. They both do however look very happy on their wedding day. Sadly their happiness was short-lived as Jim was killed when his ship was sunk in the Mediterranean less than 2 years later. Grace died just 6 months after Jim, from an illness, but no doubt his loss must have contributed to it. 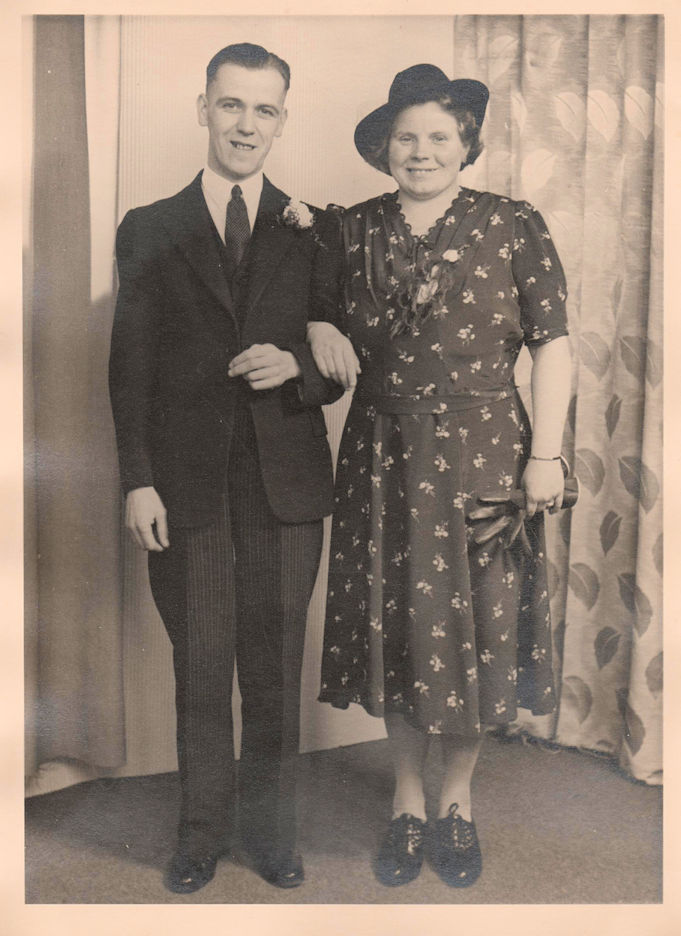 Moving on to the 1950s and a couple of lovely photos from the wedding of Roderick Douglas (Doug) Fraser and Anne Elizabeth Cromie in 1952. I think the lower one is the only photo I've got showing a wedding cake. Sugar rationing was still in force in 1952, so I'm guessing lots of the family had to pool their sugar rations together to make such a splendid cake. 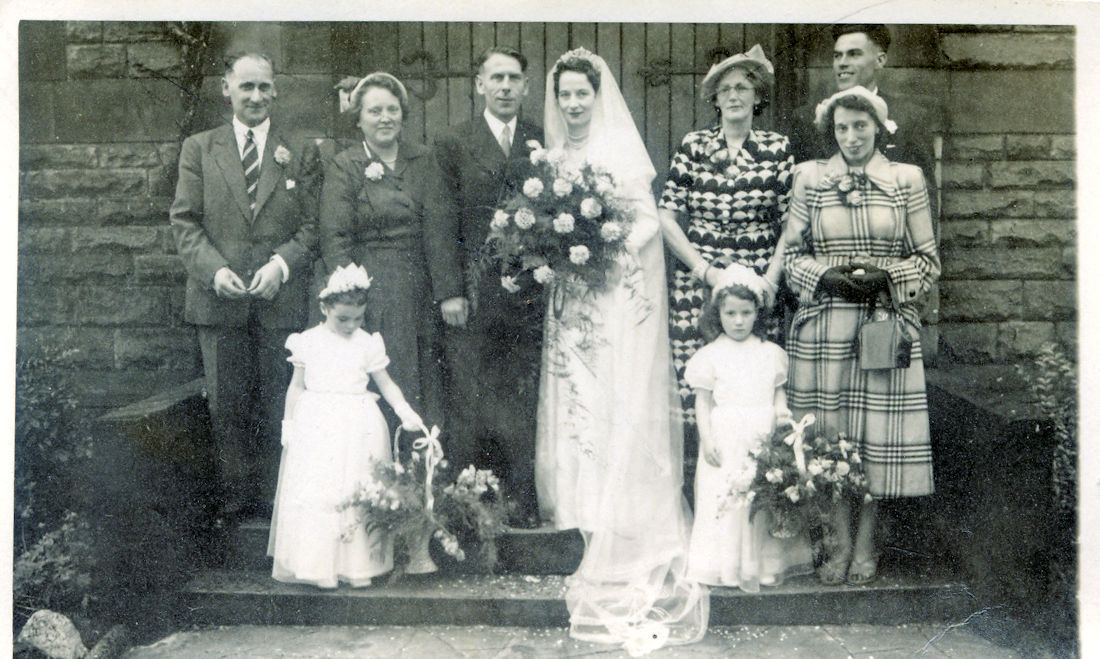 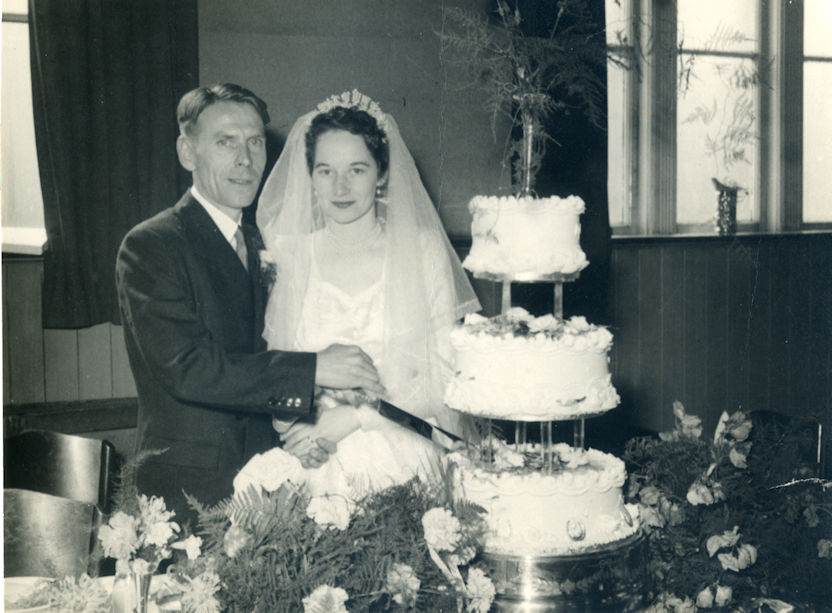 So back to the 1960s now and another photo from Mum & Dad's wedding in 1963. Not sure what they are all looking at, but it looks like something funny has happened off camera! I like this photo not only for the facial expressions, but also the mother of the bride and mother of the groom outfits. 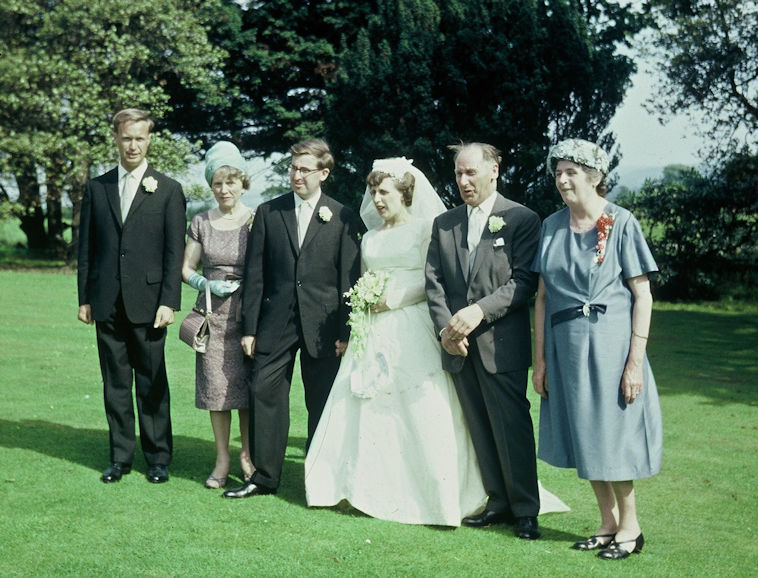 Thank you to cousin Jeanne for letting me have this gorgeous photo of her and husband Trevor on their wedding day in 1973. I love Jeanne's dress and the single red rose instead of a more elaborate bouquet and of course Trevor's 1970s hair! 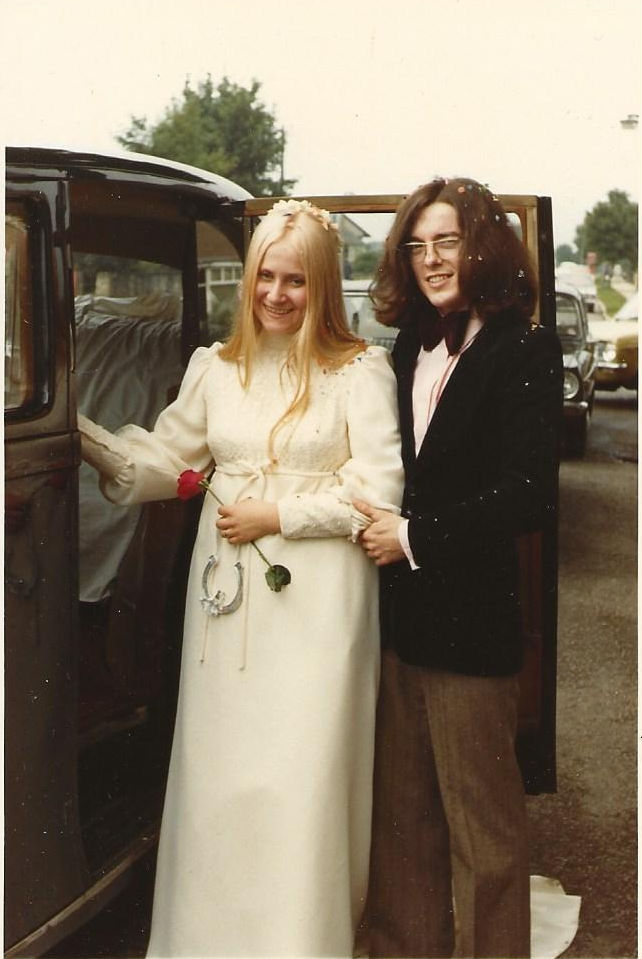 For the final photo, I've gone as up to date as I could - me and Chris getting married in 1999. A bit more of an informal photo as we don't really do formal - just us and our 2 witnesses. And I'm afraid I was never going to be one to marry in white - a green dress for me!" 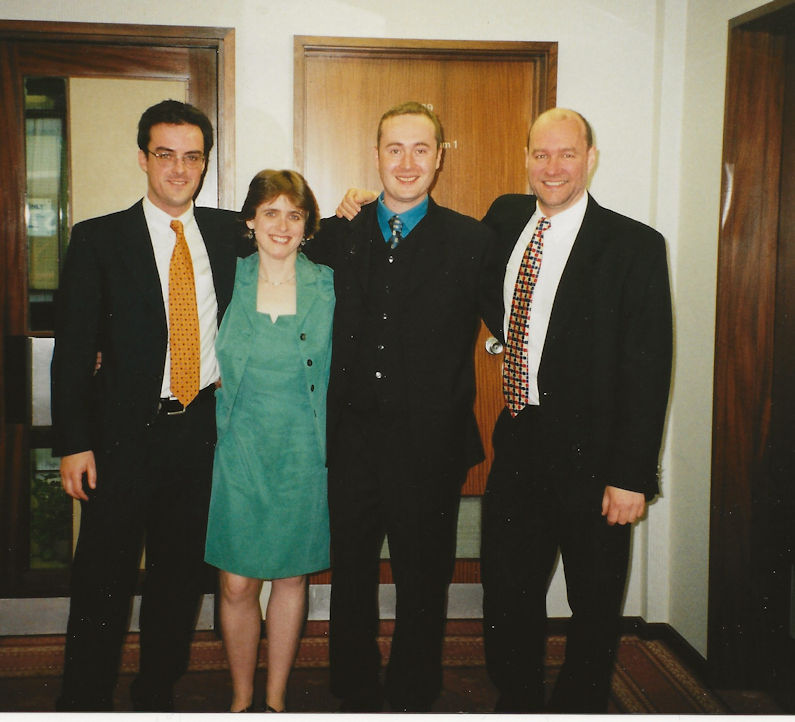 If anyone has any more wedding photos (relating to families on this website), they'd like to get added to the page, I'd love to hear from you. It would be really nice to add some more 1950s, 60s or 70s photos, but happy to add any vintage.