The Brookes/Brooks Family of Herefordshire & USA

I've spent many years researching my own Brookes family in Herefordshire, making the occasional note of other Brooks or Brookes, but not paying them much attention. A few years ago, a DNA test indicated that our Brookes family was related to a hitherto unknown Brooks family with descendants in the USA. This set me on a quest to link up the two families, so I started searching the Herefordshire records for Brooks/Brookes references. I've still not managed to find the connection, but here's what I know of the American Brooks family so far.

The US branch of the Brooks family stems from a Thomas Brooks born in 1862 in the US, the son of Thomas Brooks senior and his second wife Ann Ashton. The family history told that this Thomas Brooks senior came from Herefordshire in England sometime around 1850. Thomas had married his first wife Lucy Splain in 1848 in Hereford St Peter church and they had a daughter Harriet Brooks born the following year in Hereford. The marriage and birth of Harriet can both be found in the Herefordshire records. What happened after is not so clear. There is no death or burial recorded for Lucy Brooks/Splain in Herefordshire, so perhaps she went to the US after all and died shortly after? On their marriage certificate, Lucy gave her father's name as William Splain and said he was a sailor.

There is a document included in a bundle of papers from Burghill at Hereford Record Office (document ref: L3/73/19) which is an "Examination of Ellin Splane", dated 11th December 1813. Ellin Splane testifies that she is the wife of William Splane who she had married on 4th January 1813 and by whom she had one child, Lucy, aged about 6 months. Ellen claims she was born in Burghill about 24 years ago, which is why she is claiming settlement there. The image below is an excerpt from this document. 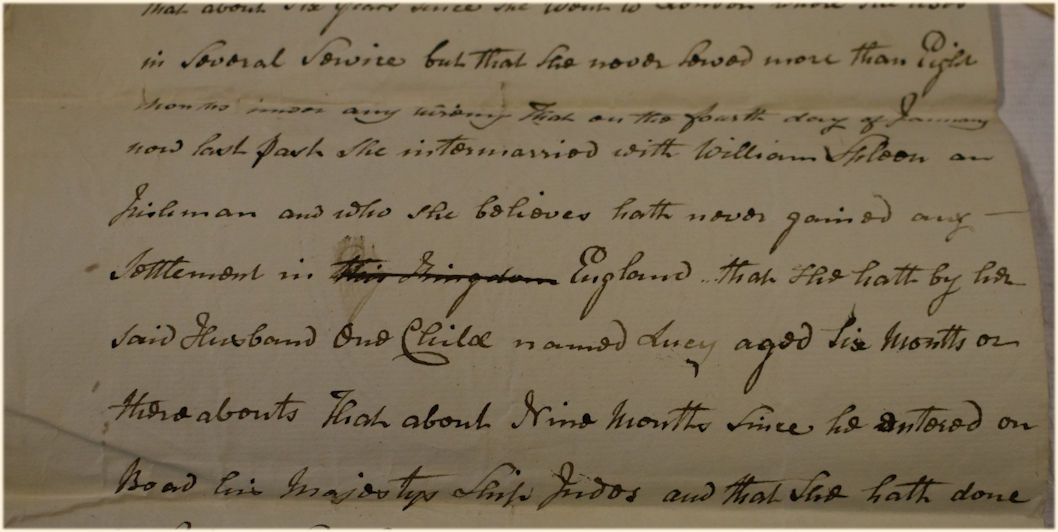 The details in the document above match up with details in the London records - i.e. that an Ellen Trilloe married a William Splane on 4th January 1813 and had a daughter Lucy, baptised in London in June 1813. There is also a naval record for William Splane from 1813 on the ship HMS Indus, which matches the ship name in Ellen Splane's document.

So the origins of Lucy Splain are fairly well documented, but finding out about Thomas Brooks has proved more difficult. On both his marriage certificate and the baptism of his daughter Harriet, it says that Thomas was a baker. I've not been able to find any Thomas Brooks who was a baker on the 1841 census. If he really was born around 1825 as he claimed, he would only have been about 16 in 1841, so perhaps would not have been trained as a baker by then. Thomas appears in the local newspapers in March 1849 as a witness in a highway robbery case. The report confirms his occupation as baker and address as Prospect Place, Hereford - the same address as appears on the baptism record for his daughter Harriet. Images © THE BRITISH LIBRARY BOARD. ALL RIGHTS RESERVED. Images reproduced with kind permission of The British Newspaper Archive (www.britishnewspaperarchive.co.uk).

On Thomas' marriage certificate he names his father as William Brooks and says his father was a "keeper". The family legend passed down through the American branch says that William was a gamekeeper to King George. Although gamekeeper would match with the keeper on the marriage certificate, no connection to King George has been found yet. There are several Thomas Brooks with a father called William and at the moment it isn't possible to work out which is the correct one. So for the time being I've not been able to take Thomas' line any further back, which means I've not been able to find out how he links to my Brookes family. If anyone can shed any light on this family, I would love to hear from you, please feel free to E-mail me

The family tree below summarises what I know about this Brookes family. It is hopefully reasonably accurate, but if you spot any errors, or any relatives, please feel free to E-mail me