This branch of the family is descended from William Rowberry or Rowbree who was born in 1748 in Thornbury, Herefordshire. As is so often the case with a name like Rowberry, the spelling varied over the years, probably dependent on who wrote it down at the time. But this branch of the family seem to have settled principally on Rowbree - one of the more unusual variants of the name. Rowbree is so unusual that as far as I know there are only 2 living representatives and the name is definitely endangered! It even featured in an article in the Telegraph newspaper on names that are becoming extinct: Telegraph Article

William Rowbree was born in 1748 in Thornbury, Herefordshire, the second known child of Thomas & Elizabeth Rowberry. I don't know anything about his early life, but by 1793 when he married Mary Price he was living in Llanwarne and working as a drainer. This seems to have been the glamorous occupation of digging drains! Llanwarne is the other side of Herefordshire from Thornbury where he was born, but his brother George had already settled in nearby Orcop, so perhaps one brother had followed the other across the county? The image below shows the document William signed in order to marry Mary in 1793. 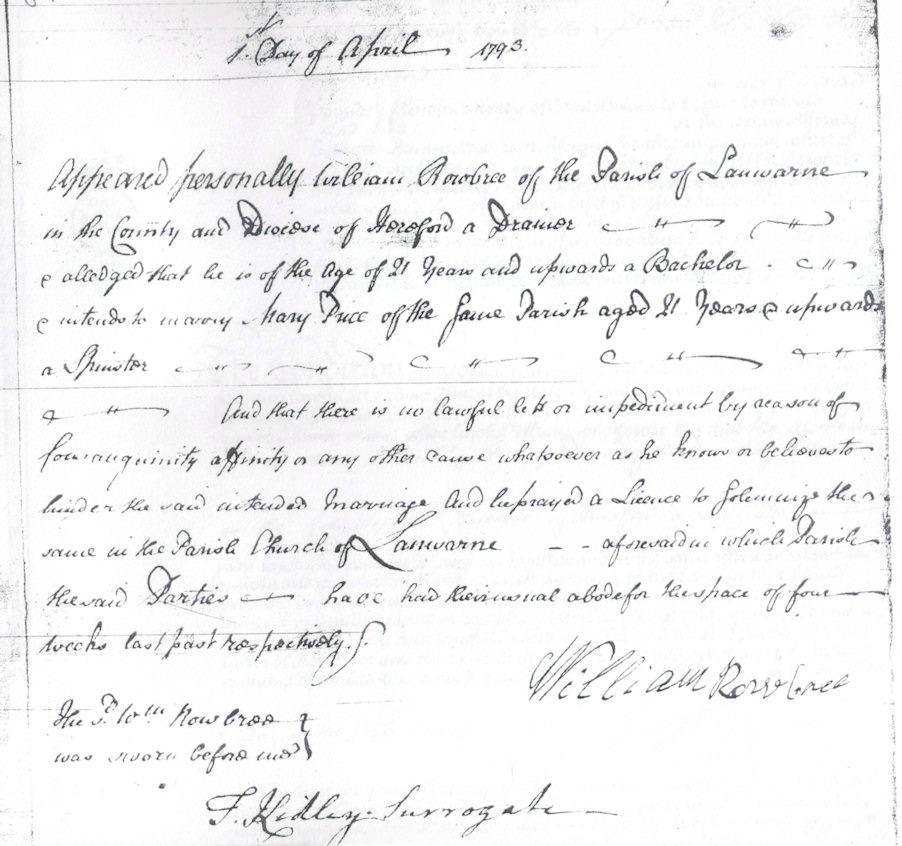 William Rowbree may only have been a drainer in 1793, but he seems to have progressed considerably, as by the time of his death in 1836 he seems to own several properties which he divided between his surviving children in his will. Six of his children survived to adulthood and all benefited from his success. His son James Rowbree and son-in-law Joshua Jones were the executors of the will.

One of William Rowbree's grandsons (William Edwin Rowbree) was taken to court to make him pay maintenance for his illegitimate son and appeared in the Hereford Journal. (Image © THE BRITISH LIBRARY BOARD. ALL RIGHTS RESERVED. Image reproduced with kind permission of The British Newspaper Archive (www.britishnewspaperarchive.co.uk). Click www.britishnewspaperarchive.co.uk to see the full page from the newspaper.

The headstone below is the only one I've managed to track down for this branch of the family so far. It is in Kilpeck churchyard in Herefordshire and shows William Edwin Rowbree (or Rowberry as it's spelt here) the same one who had to pay support for his child. 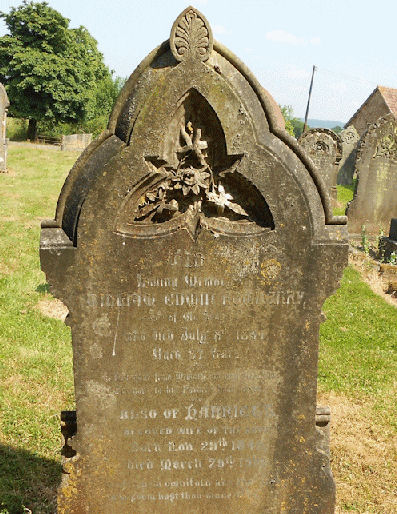 The family tree below summarises what I know about the above generations of the Rowbree family. It is hopefully reasonably accurate, but if you spot any errors, or any relatives, please feel free to E-mail me