The Brookes Family of Herefordshire
Page 1

Ethel Frances Brookes was my grandmother on my father's side. Thankfully, when choosing to give me a middle name after his mother, Dad chose Frances rather than Ethel! Ethel was born in 1900 in Totteridge, where her father James Brookes was Head Gardener at Totteridge Park House. The family lived there for several more years before returning to Hereford.

From 1906, James Brookes & his wife Harriet (nee Corbett) ran the White Lion Hotel in Maylord Street, Hereford, and this was where Ethel and the rest of the family then grew up. Presumably what Ethel learnt of the publican trade here stood her in good stead, for she later ran the Lichfield Vaults in Church Street, with her husband Alfred Rowberry. Together they ran the Lichfield Vaults from the early 1930s until their retirement in the early 1960s. Sadly Ethel died 4 days before I was born, so I never got the chance to meet her. Ethel was one of 8 children, of whom I can only really remember Constance - my Aunt Con, who was a lovely lady and a mean bridge player.

James Brookes was originally a gardener and got his first job at Thinghill in Withington, working under the head gardener, William Edwards, who was his uncle by marriage to Mary Brookes. The 1891 census shows James Brookes lodging with his aunt and uncle. A transcription of the 1891 census is given below (RG12/2059 page 4 schedule 18).

It was probably at Thinghill that James met his future wife, Harriet Corbett, who lived in Withington with her family. He eventually progressed to Head Gardener at Totteridge Park, where he worked at least until 1906. The transcription below gives the details from the 1901 census for Totteridge (RG13/1229 Page 20 schedule 116):

In 1903 he appeared in an article in "Garden Life" under the title "Famous Gardeners at Home", complete with a photograph of him. He won various medals at flower shows, some of which we still have. 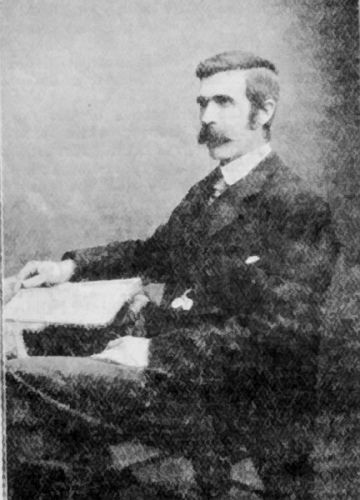 There are still gardens at Totteridge Park, so hopefully some of the plants that James planted will still be there? A very kind lady called Julia has just sent me these 2 photos below of Totteridge as it is now. How much of that would my James have recognised? Some of the trees must certainly have been there and possibly the rhododendrons. It's nice to think of him working there. 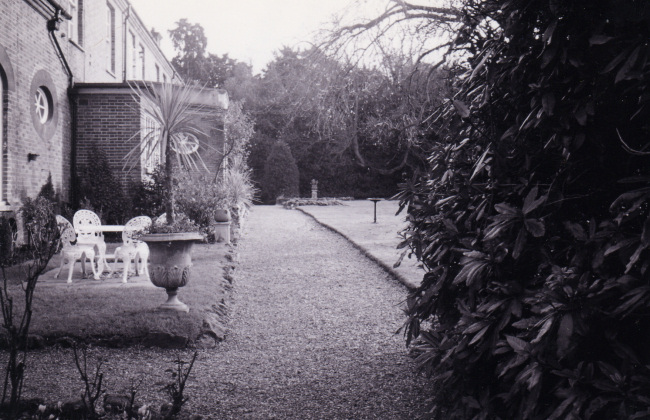 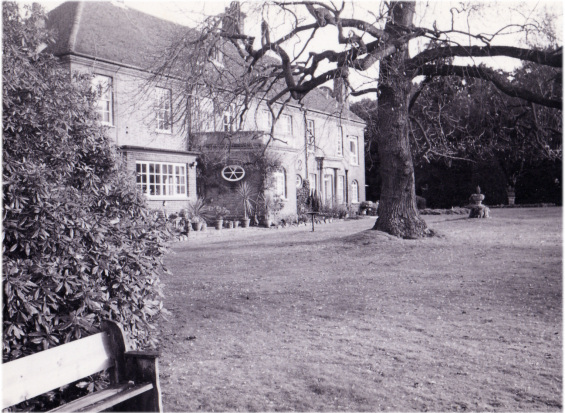 The photo below shows the family outside the White Lion in Maylord Street - probably about 1908. Below that are the details from the 1911 census, showing the Brookes family at the White Lion. With them are William Corbett - Harriet's brother and a servant Gertrude Evans.

The photograph below shows some of the Brookes family on the occasion of Lillian Brookes's marriage to Charles Williams in 1919. The wedding party is shown outside in the yard at the back of the White Lion. James Brookes is standing on the far right of the group, with Harriet seated in front of him. Sadly within a year of his eldest daughter's wedding James had died. 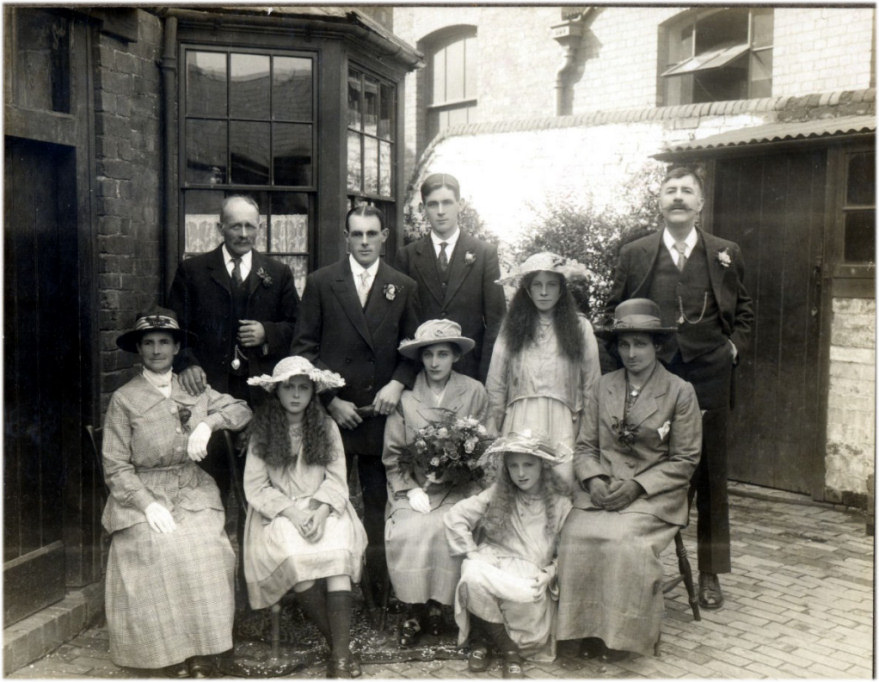 James Brookes was born in 1869 in Huntington, Herefordshire, the second child of Thomas Brookes and Emma Chamberlain. The table below gives the details from the 1871 census. (RG10/2694 p65)

I've had the photo below for over 20 years, but have only just been able to confirm who the family are. I've always suspected it might be Thomas & Emma Brookes with their three youngest children - Sarah, Albert & John, but there seemed no way to prove it. 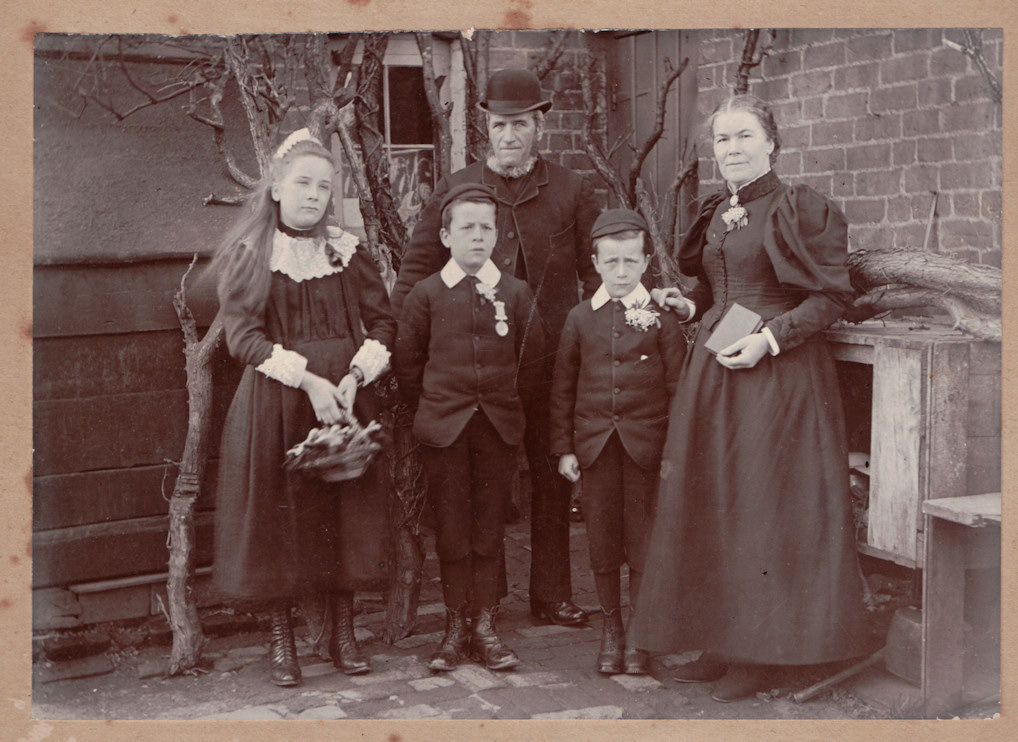 Then a few years ago I visited Burghill church with some Brookes cousins. Inside we found a photo of Burghill Church Choir taken in 1900. I was struck by how similar the man in the middle with the beard looked to the man in my photo - could they both be Thomas Brookes? 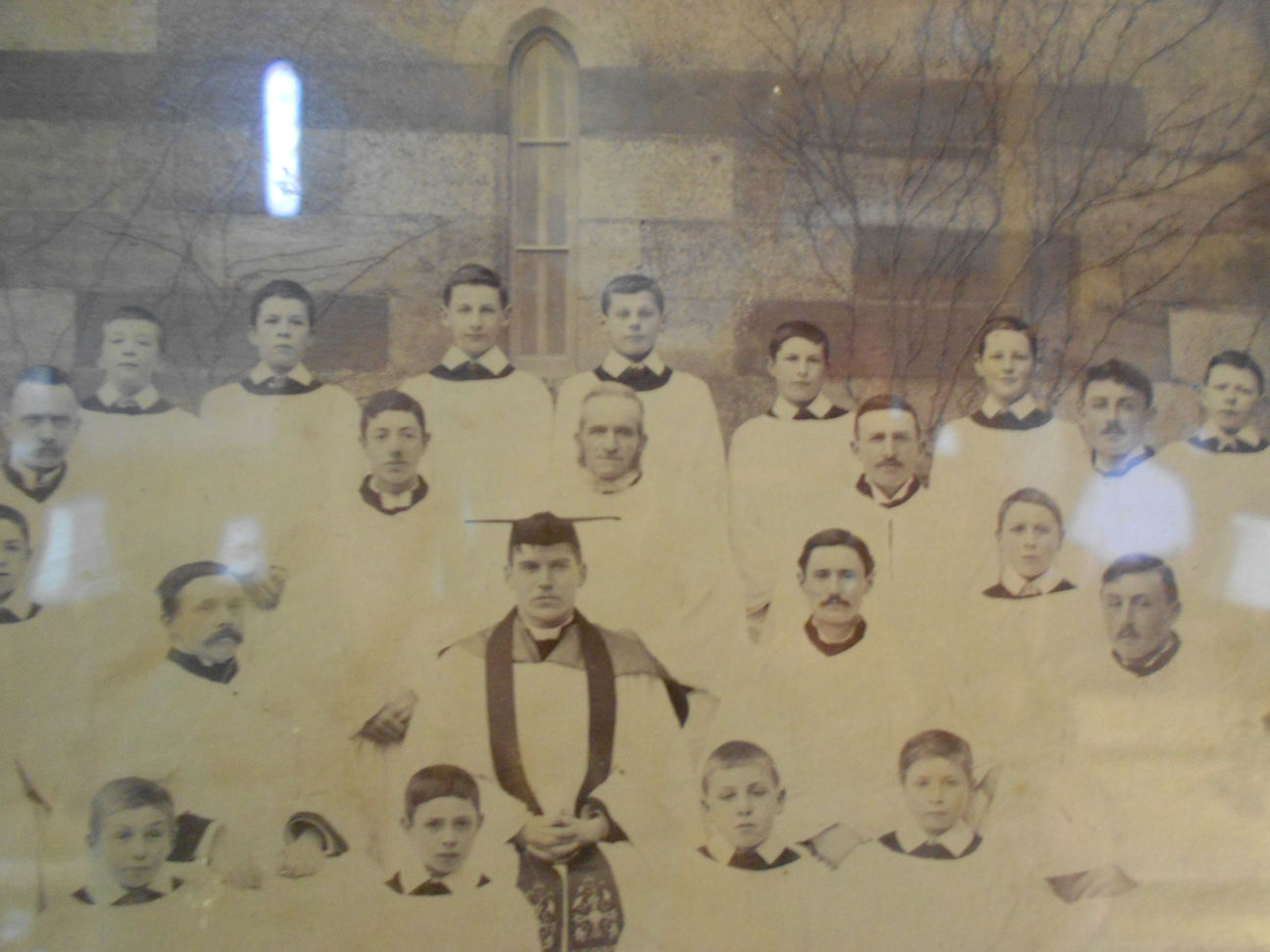 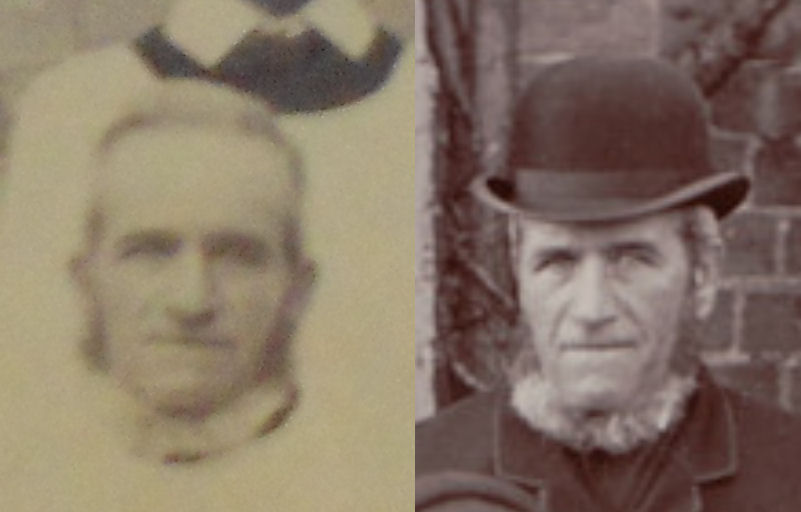 But even if they were the same man, it still didn't really prove that it was Thomas Brookes. The final "proof" came with another visit to Hereford Record Office - I found a book detailing the membership and attendance at practice and service of the Burghill Church Choir from the early 1880s to the mid 1890s. Thomas Brookes and several of his sons were clearly keen singers and featured regularly in the accounts. Thomas and Bertie Brookes can be seen in the example below from 1894. 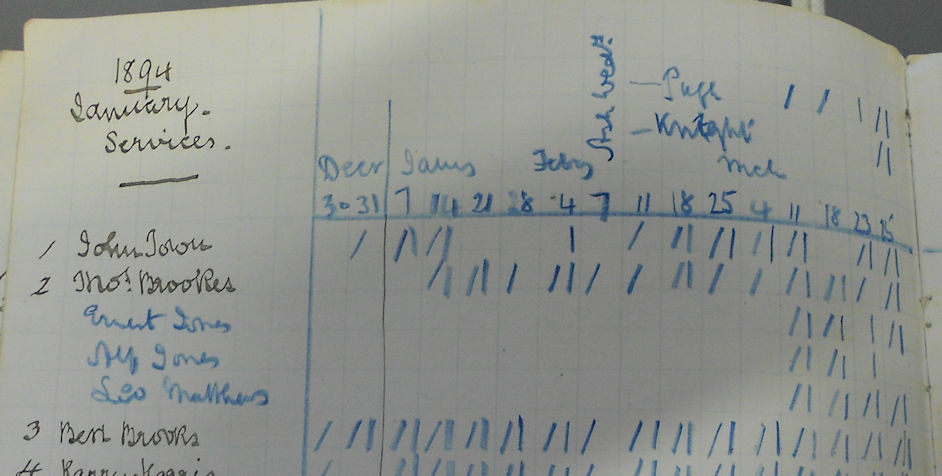 I think this is about as close to proof as I can hope to get - Thomas Brookes was in the choir at the right time to appear on the official choir photo and his appearance matches a photo from about the same era that came down through the family. Although I've convinced myself of the identities in the photo, if anyone has any other ideas, I would love to hear from them.

Thomas Brookes was also a gardener and progressed to become head gardener at Burghill Asylum, where he worked at least between 1891 and 1903. Green fingers must run in the family, as Thomas's brother James Brooks (this branch of the family lost the e in Brookes) was also a gardener as was his son Fred Brooks. Fred Brooks would have been my James Brookes's cousin and I think the family resemblance is quite strong as can be seen by comparing the two photos below.

Below is a photograph showing some of the descendants of Thomas Brookes & Emma Chamberlain, taken some time around 1924. Move the cursor over the faces, to see the names of each individual. The only two not related to the Brookes are the 2 Morgan brothers. 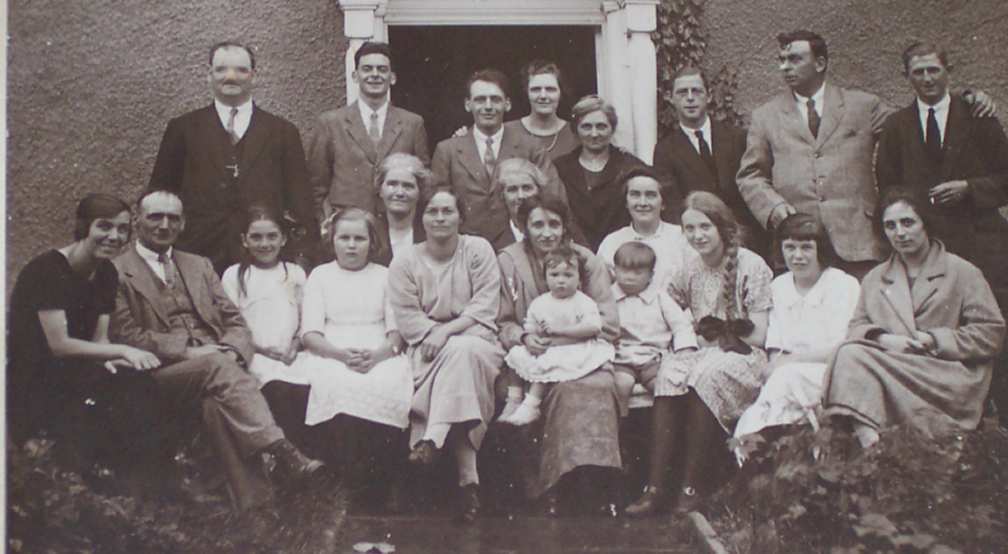 Although the photo above shows quite a few of the descendants of Thomas Brookes & Emma Chamberlain, there were certainly quite a few more. Another son of Thomas & Emma was John Brookes. John also seems to have followed the family trade and like so many of the Brookes family become a gardener. He moved to St Albans where he married Ada Roberts and together they had 6 children - again I'd love to hear from any descendants. A third brother, Charles Brookes, also became a gardener and moved first to Hertfordshire where he married Alice Duffield and then on to London where they had at least 3 children.

The third son was Albert Brookes, who seems to have moved to Wales, then Cambridge, then ultimately ended up as a Professor of History at Rangoon University, before finally settling in Cornwall. In the process, family tales suggested he married 3 times, but so far I have found only two wives - Margaret Ella Thomas, with whom he had at least one son - Albert Edwin Brookes; and a second wife the grandly named Edith Stella Ziphane Courage. I would love to know how a boy from a relatively humble family in Burghill Herefordshire managed to go to University and end up a Professor in a University in Burma? His son Albert Edwin was known as "Teddy Brookes" and in his youth was quite a sportsman. He went on to become a radio sports commentator and seems to have been quite a well known figure. I believe Teddy had quite a few children, so if there are any descendants out there reading this, I'd love to hear from them. The photo below on the left is Teddy Brookes and was taken from a rugby team photo from when he was at Hereford Cathedral School. The newspaper article on the right shows Teddy in 1937. 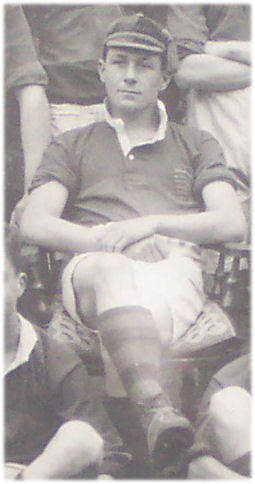 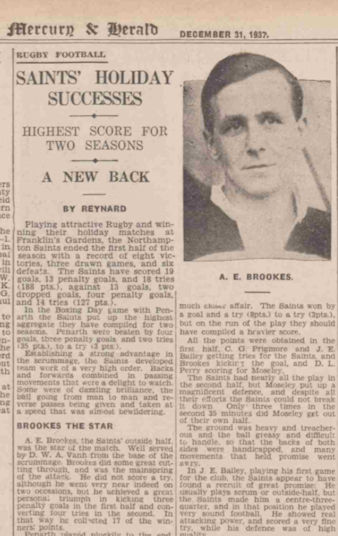 Thomas & Emma's other son Thomas Henry Brookes first worked on the railways then joined the Shropshire Light Infantry and was posted to India. Sadly he died in Calcutta in 1896 aged only 20. I don't have a photograph of him, but his attestation papers describe him as "of fresh complexion, 5 foot 7 and 5/8ths, weight 131lb, grey eyes and light brown hair. I hope to find out more about what happened to him in India.

Thomas & Emma also had 4 daughters. I don't know what happened to the eldest (Elizabeth Brookes) - she disappeared after the 1891 census and may have died young. The second daughter, Emily, married Charles Bracher and they remained in Hereford. The next daughter, Ann Brookes, married Frederick Eager. They were both attendants at Broadmoor Asylum in the early 1900s. As Ann's father had worked at Burghill Asylum, she may have gained experience there, before getting the job at Broadmoor. Fred & Annie eventually settled in Exeter and ran the Countess Wear Hotel for many years. The photo below shows Annie (on left) and Fred Eager and below that is a photo of their hotel. 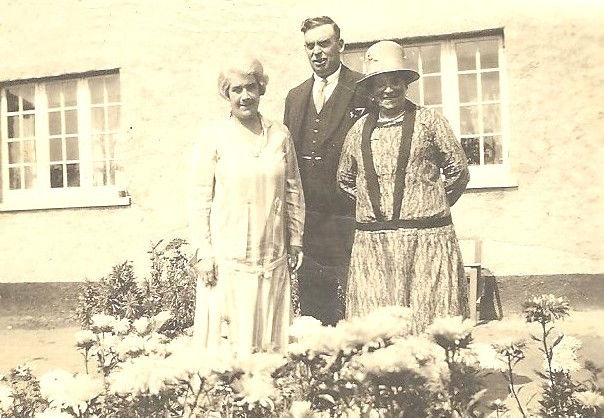 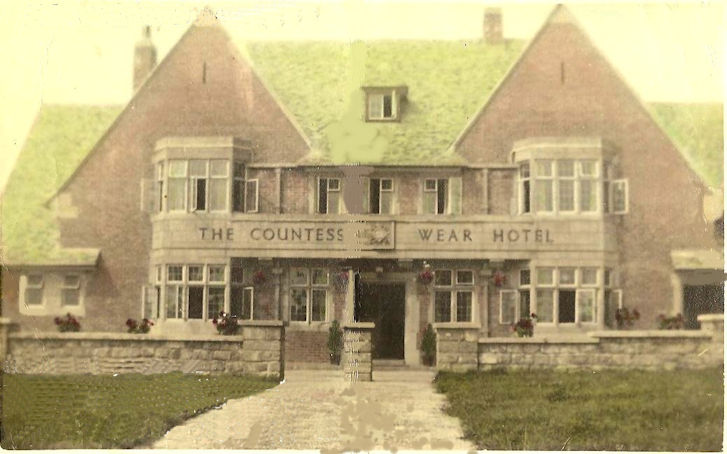 The youngest daughter, Sarah Jane, married Evan Evans and settled in Wales. It would as always be lovely to hear from any of the descendants of the family.

The family tree below summarises what I know about the Brookes family. It is hopefully reasonably accurate, but if you spot any errors, or any relatives, please feel free to E-mail me