The Abels of Herefordshire

Eleanor Abel was was one of my 4xgreat grandmothers. She was born in 1775 in Stretton Grandison, Herefordshire, the seventh child of Thomas Abel & Elizabeth Gamons. I don't know anything about her early years, but in 1794, aged only 19 she married James Corbett in nearby Bishops Frome.

Although James Corbett managed to sign his name at the marriage, Eleanor could only make her mark, suggesting she had little or no education. James & Eleanor settled in Stretton Grandison and had at least 10 children together. For more information on the Corbett family, please click on the following link:

I've not managed to trace the fate of most of Eleanor's siblings, apart from her youngest brother Joseph Abel. Joseph married Elizabeth Davies in 1802 and they had at least 5 children over the next twenty years or so, living in the Eggleton area. Although his sister Eleanor might not have been able to read or write, Joseph certainly could, as he was charged with forgery in 1836. Initially he seems to have absconded as a reward was offered in the local newspaper. Image © THE BRITISH LIBRARY BOARD. ALL RIGHTS RESERVED. Image reproduced with kind permission of The British Newspaper Archive (www.britishnewspaperarchive.co.uk) 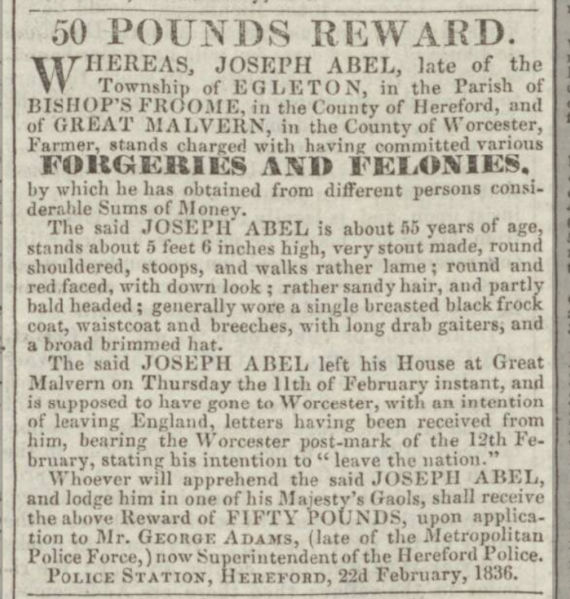 While he was still at large, all his belongings, including livestock but also all his household goods were auctioned off to pay his creditors. His poor wife (if she was still alive, I'm not sure) must have been left destitute. Joseph escaped capture for a couple of months before being arrested in Lancashire. The newspaper report even suggests he had bought a wig and whiskers as a disguise. He was eventually convicted in August 1836 and sentenced to be transported for "the term of his natural life" to New South Wales, Australia.

Eleanor's father Thomas Abel died in 1809. He'd written a will in 1802, which descibes him as being from Eagleton in Bishops Frome. He left money to his surviving children John, Michael, James, William, Elizabeth, Joseph (who later became the forger) and Eleanor. He also left money to Eleanor's 3 children at the time Jane, Elizabeth and Eleanor and to his grandson William the son of William. He mentions 2 children for Elizabeth too - James & Thomas, although he doesn't say what their surnames are, hence the question marks on the tree below!

Although I've not managed to find a baptism for this Thomas Abel, I'm pretty confident he is the son of another Thomas and Elizabeth Abel who lived in the Yarkhill/Weston Beggard area of Herefordshire. This Thomas also left a will in 1749 in which he left his things to amongst others his son Thomas and a daughter Eleanor. This Thomas Abel seems to have been reasonably prosperous as his will lists amongst other things - 4 horses, 6 pigs, 45 sheep, 100 weight of cheese and a cider mill! Thomas Abell senior's parents were John Abel and Eleanor (or Elinor) Tompkins who had married in 1695 in Ocle Pychard. The name Eleanor therefore ran through at least 5 generations.

The family tree below summarises what I know about the above generations of the Abel family. It is hopefully reasonably accurate, but if you spot any errors, or any relatives, please feel free to E-mail me